The Jewish Ethicist - Keeping Down with the Jonses 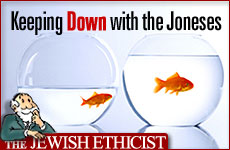 Replacing competition for opulence with delight in simplicity.

Q. My neighbors have an annoying way of trying to match or outdo us materially. I'm thinking of borrowing something or pretending to have it, just to goad him into wasting his money on this annoying habit.

A. The urge to keep up with the Joneses (or to surpass them) is hardly new. The phenomenon is described many times in the words of our sages – almost always in the context of a discussion how to mitigate this harmful phenomenon.

Here is a selection from a long passage discussing this phenomenon:

The rabbis taught: At first when people would bring portions to a house of mourning, the rich would bring in trays of silver and gold, and the poor in baskets of woven reeds. Then the poor were ashamed, so they decreed that all would bring in baskets of woven reeds, in deference to the poor. The rabbis taught: at first they would pour drinks in the house of mourning, the rich in white glass, and the poor in [the less expensive] colored glass, and the poor were ashamed. They decreed that all would pour in colored glass, out of deference to the poor. . .

At first the [excessive expense of the] funeral of a dead person was harder on the family than his death, so much so that the relatives would just abandon the body and flee. Until Rabban Gamliel came and made light of his own status and went out [at his own funeral] in [simple] flax garments; and then all the people become accustomed afterwards to go out [to be buried] in flax garments. (1)

Here are two other stories, this time from the mishna:

[A fascinating historic lesson in this mishna is that even two thousand years ago, when literacy among other nations was limited to the few, any Jewish farmer would be embarrassed to be illiterate.]

Rabban Shimon ben Gamliel said: There were never such happy days for Israel as the 15th of Av and Yom Kippur, when the girls of Jerusalem would go out in borrowed white garments, so as not to embarrass one who has none. (3)

In each case, the sages noted the problem of envy, the desire to match one's neighbor at any cost and the shame incurred when one is unable to do so. In each case, the sages made a special effort to lower the bar, to prevent destructive competition and envy. Whenever "keeping up with the Joneses" appeared divisive, they instituted a regime of "keeping down with the Joneses". This included a strong element of personal example, as when Rabban Gamliel, who was the leader of Jewry and a wealthy man, ordered that he himself should be buried in simple shrouds, in order to set a good example for others.

So instead of goading your neighbor, I would recommend the opposite course of action: go out of your way to adopt modest habits that will not tend to incite competition. Obviously you do not have to adopt an ascetic lifestyle, but given the competitive tendencies of your neighbors, erring on the side of simplicity will make life more pleasant for you and your neighbors alike.

The Jewish Ethicist: Comfort and Competition

The Jewish Ethicist - Is It Charity?