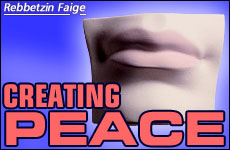 When world peace and security is threatened, we need to look at our inner world and identify the corresponding issues.

The mutual love between God and His people is captured by the names used to refer to the holiday of Passover. We, the children of Israel, call it Passover, commemorating His strong show of affection when He "passed over" Jewish homes during the last plague when striking the Egyptians’ first born.

God, conversely, refers to the holiday as "the feast of unleavened bread," attributing the cause of celebration to Israel’s willingness to hurry, sacrifice and make due with the bread of poverty, the barest of provisions, in order to follow Him into barren, uncharted territory, literally a desert, to become His elect nation. This marked the beginning of a glorious relationship that has spanned almost 4000 years, surviving unprecedented challenges to the commitment of both our Heavenly Father and His often-wayward children.

The Kabbalistic works offer yet another insight into the name of the holiday. "Pesach" can be split into two words, "Pe-sach," which means "a speaking mouth." This refers to the fact that the children of Israel had been brutally enslaved for 210 years and had not had the luxury of thinking, let alone speaking freely. With freedom, came the liberation of the mouth, the signal human capacity to translate the language of the soul into comprehensible communication.

In Genesis, when God creates man and "breathes into him a living soul," Onkeles, the foremost Bible translator, renders this "man became a speaking being." The exclusive hallmark of humanity is speech, and when we were in bondage, our speech was incarcerated and imprisoned. The breaking out of the shackles of servitude, released our tongues and the expressions of our souls began to flow again.

In following the roller coaster of post-9/11 world events, I am struck by a virtual sense of vertigo at the runaway overhaul of our existence as we knew it. Moreover, when life moves at this rapid, fast-forward pace, it is almost impossible to get a clear perspective, a handle on what is occurring and perhaps, most importantly what our response needs to be in this ever more insane state of affairs.

I was asked recently by my community to give a class on "Shalom Bayit," domestic peace and tranquility in our homes, a refresher course on the relationship between husband and wife. I prefaced my remarks by sharing my sense of utter helplessness and frustration at being a mere spectator to events of such magnitude unfolding before our very eyes.

What power do we have to make a difference? What role can we play? What impact can we have?

I think it is fair to say that the world in which we find ourselves is a commentary, if not an actual reflection, of our inner landscape. Our sages teach that every human is an "olam katan," a complete world unto himself or herself. The macrocosm is reflected in the microcosm and vice versa. This is most compellingly captured in the fact that God began His world with a creation of "Adam," one single human being, to inform us for all time that the justification for the creation of the entire universe, resides in each individual. Every person is considered a total world unto himself or herself.

When world peace and security is threatened, we need to look at our inner world and identify the corresponding issues. If inspectors are being dispatched to determine compliance and defiance, what about our personal domain? If what they are looking for is an arsenal, weapons of mass destruction, what about all the means at our disposal, in our own personal world, to build or destroy? If we want "shalom" out there, perhaps, the place to begin is "Shalom Bayit," peace in our very own space.

At a time when we are approaching the holiday that celebrates liberated speech, are we not mandated to examine our use of that powerful "arsenal"?

It is so easy to destroy and so hard to rebuild.

"Life and death are in the hands of the tongue," our sages inform us. Words can heal and words can devastate. Has there ever been a time when the term "verbal abuse" was as commonplace, almost a household phrase? How many people have been in the line of fire of our personal weapons of mass destruction? We are all familiar with these victims -- those irreversibly scarred and mangled by those who could and should have been there to support and nurture. Their self-image will always be blackened by our ugly, verbal lashes.

It is so easy to destroy and so hard to rebuild. Those who are called upon to counsel others have tried to mitigate and assuage the pain of these anguished souls so that they can move on to forgive and trust so they might eventually engage in normal relationships. The poisoned word is as lethal as poisoned gas and the ravages are no less extensive.

In reality, there is a greater body than the U.N. that sends inspectors to our homes, businesses, synagogues and areas that we occupy. What will these heavenly inspectors find? Are we in compliance or defiance of using our God-given gift of speech for constructive and productive purposes?

Rebecca, an accomplished musician, is a warm, highly intelligent, and competent member of our community. She called me, following my "Shalom Bayit" class and shared that her parents had divorced when she was very young. Her mother told her that the verbal carnage in the home left her with no recourse but to split up. After all, her mother sadly concluded, cruel, hurtful words once spoken can never be retrieved and they continue to devastate and wreak havoc.

Rebecca has never forgotten her mother’s comment. She resolved that this would never happen in her life. She married late but has a beautiful family and her resolve has remained steadfast and uncompromising. Indeed, before she utters a word, she consciously pauses for a moment to reflect whether this is a word to which she wants to give independent life and whether she wants to put it out there never to be recalled.

I was totally blown away. Rebecca’s house may not yet be free of "chametz" (unleavened bread) prohibited on Passover, but she has already achieved the harder work of freeing her speech. Her arsenal is not one of mass destruction. It is affirmative of life. She brings "shalom" to her "bayit" peace to her home and to the context of her world.

The positive and enriching energy that she and others like her create every time they comply with the innate rhythm and mandate of the supernal soul, brings us all closer to the collective "shalom," the peace that we so desperately need.

We must not be helpless bystanders to a world bent on destruction. Liberating our speech, the greatest gift the Almighty has bestowed on humankind, will be our way, very literally, of converting our "swords into plowshares" and ushering in the long awaited redemption.