Love is not a Luxury 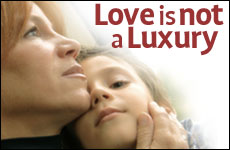 Our love for our children -- and our ability to express that love -- will ultimately make them or break them.

My daughter comes home hungry from kindergarten; I feed her. My toddler is crying; I pick her up and cuddle with her on the sofa. My third-grader rushes in from the playground with a skinned knee; I smear on some antibiotic cream, cover it with a band-aid, and seal it with a kiss.

If you were to glance over the list of mothering tasks that I perform over the course of an average day, you might think that I am totally replaceable. Bring in a conscientious babysitter, an average (or even below-average) short-order chef and maid, and a sympathetic nurse for emergencies, and my children would be no worse off.

For 50 years, the Israeli kibbutz movement tried to do just that. Kibbutz children ate healthy meals in a communal dining hall, were cared for after school by devoted and carefully-trained kibbutz members, and slept in a communal "children's house" equipped with a state-of-the-art intercom for children to alert the kibbutz member on duty if they had a bad dream in the middle of the night.

The results were tragic. Dozens of academic studies of kibbutz children have revealed that over half of them have grown up into adults who suffer from trauma and serious psychological disorders.

The diagnosis? Severe lack of love.

Rabbi Lawrence Kelemen, a Harvard-educated scholar of education and author of the acclaimed bestseller To Kindle a Soul: Ancient Wisdom for Modern Parents and Teachers (Leviathan Press) details how the intangible emotion of love and the close relationship it creates between parents and their children influences children dramatically and permanently.

Rabbi Kelemen quotes a multitude of academic studies which demonstrate that a parent's love is a basic prerequisite for healthy human development. More than their IQs, or their friends, or the schools we send them to, in the end it is our love for our children and our ability to express that love which will ultimately make them or break them.

A newborn horse or kitten, for example, can walk shortly following birth. But in order to reach the level of self-sufficiency that most animals have at birth, human beings require an additional nine months outside of the womb.

In 1998, Dr. Michael Orlans, founding executive board member of the American Psychotherapy Association, explained that during these nine months the most important factor in the brain's development is "interactive routines between caregiver and infant."

Or, as Rabbi Kelemen explains, "Children do their final 'wiring' when we love them."

The impact of our love on our children's development, expressed through the attention and affection we provide them, does not grow less when our babies grow into toddlers and children and adolescents. Our children continue to crave the sense of security and confidence (known as "secure attachment") cultivated by a parent's careful attention to their needs whether that attention is provided by giving a bottle of warm milk to your toddler, or reading to your six-year-old, or hanging up the phone so that you can hear all about your child's adventures at school.

Quality attention is one of the most important gifts you will ever give your child.

Providing the high quantity and quality of attention that children need is time-consuming, demanding, and often requires a thorough reshuffling of priorities.

It's also worth it. Quality attention is one of the most important gifts you will ever give your child.

Current research at leading universities confirms that children raised by parents who are sensitive and attentive to their needs are more than six times as likely to avoid serious psychological disorders in later life. They are twice as likely to grow up into adults with high self-esteem. They are also more likely to be independent, confident, and emotionally thriving adults.

SEND ONE YOUR LOVE

The next ingredient in creating healthy children is affection: the hugs, the kisses, the adoring looks that express just how much you love your child.

Mounting research has shown that children who are raised in an affectionate family environment are more likely to grow up to be caring, empathetic, and giving people. They are 30% more likely to get married and to stay married. Most striking of all, psychologist Joan McCord, former President of the American Society of Criminology, was able to predict with awe-inspiring 92% accuracy whether a child would grow up to be a criminal based exclusively on the level of affection that a given child had received from his mother.

As Rabbi Kelemen concludes from all of these findings, "Love is not a luxury. Taken together, the basic ingredients of love -- attention and affection -- might constitute the single most important factors in human development."

The most remarkable research findings presented in To Kindle a Soul relate to the long-term health consequences of parental love. In the 1950s, researchers at Harvard University asked students to rate their parental relationships as "Very Close," "Warm and Friendly," "Tolerant," or "Strained and Cold." 35 years later, researchers discovered that an astounding 100% of people who had rated their relationship with their parents as "Strained and Cold" were suffering from critical health conditions (such as severe heart disease, intestinal ulcers, and alcoholism). This is in contrast with only 47% of the people who described their relationships with their parents as "Very Close" or "Warm and Friendly." The research team concluded that feeling loved by one's parent promotes life-long immune function and good health.

So the next time you pick up your crying baby, make spaghetti with meatballs for your children, or cover a skinned knee with a band-aid and seal it with a kiss, remember that you are doing something of tremendous importance. These minor, daily expressions of parental love, attention, and affection have major long-term positive impact.

It's true -- you will never list these parenting responsibilities on your CV, brag about them to your colleagues, or even to your fellow mothers on the park bench. But the moments, days, and years that you devote to your children are among the most important of your life.

They are certainly the surest investment you will ever make, with the highest possible return. A thriving human being. 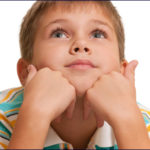 The Power of Yet4 min read 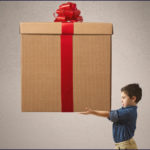 The Best Gift for Your Children3 min read 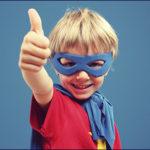 Taking Charge: How To Discipline with Love7 min read