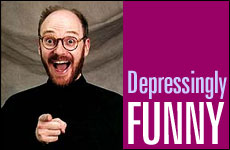 David Granirer was diagnosed with clinical depression. And he thinks that's hilarious.

Standing in front of a packed audience at a local theatre, he jokes about his strategy for those obnoxious telemarketing calls during dinner time.

It's really simple to get them off the line he explains. All you have to do is wail:

"I'm feeling so depressed, I just need someone to talk to. "Please, please don't hang up!"

When David Granirer jokes about being depressed, he's not kidding. He landed up in a psych ward at age 16, battled bouts of depression after a serious car accident at 26, and was formally diagnosed with clinical depression when he was 33.

After spending years in therapy and counseling, he decided to take a counseling course to become a therapist himself. It was during those years that he turned to an unlikely place to help in the healing process: his sense of humor. While working at a local crisis center, Granirer started trying out some of his jokes on the participants. The response was so overwhelming that it made Granirer realize how powerful a tool laughter could be, and its potential therapeutic effect for both himself and others.

"Humor helped me get my confidence back," explains Granirer. "Being able to take some of the painful things I'd been through and make them funny helped me to let go of them. When people laughed with me I felt like they understood and were on my side, which made a huge difference in how I felt about myself."

"Being able to take some of the painful things I'd been through and make them funny helped me to let go of them."

With Granirer turning himself into the resident funnyman, he decided to try out his luck at the local comedy club.

"I completely bombed," he confides.

But this only made him more determined. His next stop was a standup comedy program in L.A. with celebrity standup Judy Carter, and classes using the much vaunted Comedy Gym workbook -- a handbook of standup comedy formulas used by up and coming comics across the globe.

Like many Jewish comics, Granirer was determined to turn his own experience with depression into a source of humor. At the same time, in the Jewish tradition of "tikkun olam" (repairing the world), he wanted to see if his new found love of comedy could help others deal with mental illness as it had done for him.

Enter Stand up for Mental Health, a comedy course Granirer developed to help people who are struggling with mental illness and looking for alternatives to main stream therapeutic techniques.

The objective is to get participants to be comfortable with themselves and be proud of who they are.

"People with a mental illness are always being told what they can't do. In this group they get to prove what they can do," Granirer insists.

Granirer also feels that his graduates, around 60 of them so far, take aim at social stigma just by getting on the stage. "We present people with mental illness as being strong and capable and that goes against what you often hear people say."

"We present people with mental illness as being strong and capable and that goes against what you often hear people say."

After completing the course the new comics perform almost every week for an entire year. One of the places where they can perform is a venue run by Granirer himself.

Imran Ali, one of Granirer's more inventive comics, routinely sings there. The music is from "Tiny Tim's Tip Toe through the Tulips." But Ali turns it into a comical song of "tip toeing through a psych ward."

Audiences respond with laughter laced with respect for someone who has the courage to do an act like this.

Ali has schizophrenia and a couple of other disorders but that doesn't stop him. He says he's determined to make comedy his full-time career.

Granirer has also made something of a career from his innovation to treat mental illness with humor. He recently published his new book "The Happy Neurotic" (Warwick Publishers). The book goes against new age values by maintaining that "you can be happy, productive and well-adjusted while being as neurotic as ever!"

Granirer admits that the pull he feels to help those who are suffering personally comes from the suffering his family endured.

David's father, grandfather and grandmother are survivors of a Romanian concentration camp. They were rescued only because a Christian relative bribed their way out.

"Any time you grow up in the shadow of that kind of stuff, you learn the value of humor and staying sane," Granirer says.

But like any good Jewish comedian, he uses his family's own difficult past, and that of his people, into a reservoir of stand-up material.

"I tell anti-Semites, ‘You're right -- we Jews are trying to take over the world, but we're really bad at it. After 2000 years we've only taken over a very small, hot, dry piece of land -- it's called Miami.'"

David can be reached through his website at www.standupformentalhealth.com

Cassandra Freeman is a freelance writer living in Vancouver.