A Father's Reality of War 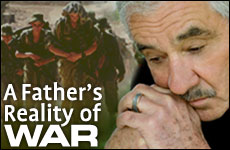 Beyond Cheesecake: Dairy Desserts for Shavuot

I grew up a bit behind Israel; she was born in 1948 and I came along four years later. I was raised in a common American Jewish family in a Jewishy suburb. We weren't religious; we didn't attend synagogue regularly and we observed only the highest holidays. Israel was a place, but she didn't impact my life since I was comfortably Jewish in a Jewish world. Once I left my sheltered suburban community I began to learn that being Jewish was far from the norm, that there were groups of people who had never met a Jew, and even larger groups of armed people in the world who felt that they, not the Jews, were entitled to Israel.

I began studying Judaism in college and grew prouder and more interested in my heritage. And when I married someone who grew up in an observant home, that enhanced my love for Israel and all things Jewish. And the more I learned about the trials and tribulations of Jewish history, the more important the Land of Israel became to me. Israel was no longer just the name of a place, it was my homeland.

This knowledge was empowering, and with that power I realized I had a choice to make. I could remain passive about Israel the rest of my life, or I could begin to live what I believed.

So my wife and I began practicing and living traditional Judaism, including the conscious decision to become a Zionist. The personal challenges required by this decision were sometimes mildly uncomfortable or difficult, but to me they were the least I could do as I tried to live my beliefs. Along with this commitment came many blessings: a wonderful marriage and three amazing children that my wife and I raised in an observant, Zionistic home.

My children grew up, as children tend to do, but they didn't just leave the nest, they left the country. All three moved to Israel and made aliyah.

The past few years have given me many causes for alarm. Suicide bombers, midnight air raids, and terrorist attacks are seemingly everyday events in Israel. Sometimes I think the media should make an event out of a day without some kind of attack on my homeland. Though despite the never-ending attacks, I was usually able to convince myself that my family was safe, and I would go to sleep at a reasonable hour like most parents of adult children do.

That all started to change on July 12, 2006 with the kidnapping of several Israeli soldiers by Hezbollah alongside the Lebanese border, and the kidnapping of a soldier near Gaza by Palestinian terrorists. I began watching TV instead of going to bed. When I finally did fall into bed, sleep would escape me as I thought about the many civilians in northern Israel who were now under fire by a non-repentant group of terrorists bent on Israel's destruction. My youngest son, Yakov, had just finished his tenure in the Israeli Army as a member of the Golani Brigade. He called to tell me he had patrolled that area many times and they were always under alert for kidnapping attempts, since the area was known for its dangerous Hezbollah squads. That phone call calmed me into thinking that my boys were out of harm's way as neither was in the army at that time.

My baby boy going to war?!

A week later, my son Yakov phoned me and said, "I was just called up and am being mobilized immediately." He did not know where he was going; he was just told to report. My anxiety level ratcheted up multiple levels. My baby boy going to war?!

Yakov called a day later to tell me two things: His old unit was preparing to go fight in Lebanon, and he was being sent to an outpost in Judea/Samaria (West Bank) where he would patrol and man checkpoints in order to free up active duty soldiers so they could report to the Lebanese border. To think that Yakov had been on active duty just two weeks before. It was then that I asked him to call me each day when he was back from patrol. I began to live for each and every phone call. While my son was not going to Lebanon, words like night patrol and checkpoints conjured up troubling thoughts in my head.

Time passed in a blur of anxiety and sleepless nights. My life revolved around the ringing of the phone. Finally on August 1, Yakov called to tell us that his tour of active duty was done and he was returning to civilian life. Although the war was not over, I thought my family's direct involvement in it was.

That feeling of relief quickly ended with yet another phone call on August 10 as the fighting in both Gaza and Lebanon intensified. This time it was my oldest, Baruch, with the news: "I was just called up and mobilized with my old unit. We are reporting to the border alongside Gaza." I told him to call me when he could and to let me know what was going on. The next day he phoned to tell me that he would be on patrols during the day and at night while also setting up ambushes.

Again two words (patrol and ambush) conjured up troubling thoughts in my head. I asked Baruch to call each day (or night) when he got back to base. Now my anxiety was complete. My two sons had both been called up to do their duty as Jews, as Israeli citizens, and as soldiers to help protect their country. Was this out of a novel; was this a movie I was watching? Was this something I could be detached from, to put down and pick up at will or after a commercial? No! For my family and me, this was real. No longer was it just about the patriotism of other youngsters and the protection of the land in some detached way. Now Jewish values had slammed its way into my family's life with a challenging force I had never dreamed possible. I tried hard to hold onto all the positive feelings I have always had for the Land of Israel, but try as I might, fear overpowered every other feeling. Each night I waited for the phone call to assure me that Baruch was safe and alive.

My son Yakov phoned to tell me that his former commander was seriously wounded in Lebanon and that several of his friends (those he shared bunks with just a few weeks before) were killed in battle. Names of villages in South Lebanon such as Bint Jabil and Maroun El Ras became part of my consciousness. Fierce battles took place and dozens of Israeli soldiers lost their lives.

How sad I was for Yakov who at age 21 had already lost friends in battle.

How sad I was for Yakov (he had just resumed yeshiva studies upon completing his army duty), who at age 21 had already lost friends in battle. He now planned his visits to hospitals to see his wounded comrades, instead of enjoying conversations with those friends over cups of coffee in outdoor cafes. How upset I was for my son Baruch who had to leave his job and his wife behind in Jerusalem (to suffer the same anxieties that I was), to patrol in and around Gaza -- instead of taking those wonderful walks with her around beautiful Jerusalem.

This was war and this was the disruption of the lives of the Jewish soldiers and their families. This was about fighting for the survival of a Jewish country whose north was being burned up by Hezbollah rockets and whose south was being bombarded by Hamas rockets.

As I waited alongside my wife everyday, our hearts went out to those parents of so many lost Israeli soldiers. Somehow I forged a silent bond with them. My heart cried for the kidnapped, wounded, and killed soldiers. I also felt the anguish of the people who lost their homes. Maybe it would have been better to be in Israel, so at least I would have had the comfort of being around everyone else who faced the same anxieties as me. Instead, I was in Cleveland, spending my nights watching cable news and waiting for phone calls.

The TV ended up being on all day and all night. It became my link to this crazy war that started so abruptly and seemed to end in the same way, with apparently very little resolved other than the fact that I fear my children will have to do this all over again very soon.

Luckily for me, those much-needed phone calls did come from my sons, although war has no set schedule. Baruch went back to his wife in Jerusalem, and Yakov returned to the mystical city of Tzfat to continue his learning. One year later, I am still recovering, trying to come to grips with this terrible, frightening war. 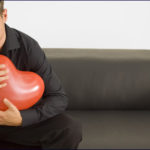 How to Get Over a Break-Up5 min read 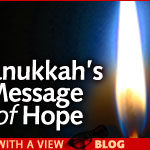 Sabbath: Day to Pray or Day to Play?1 min read