What Did You Just Say? 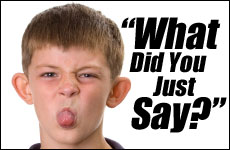 Effective ways to respond to your child's disrespect.

Your blood is boiling. You are seething with rage. Your teenage child has just uttered words of defiance to you that you would never have even dreamed of saying to your parents when you were his age.

This time he has gone too far. What he said yesterday and the day before were bad enough. But this is absolutely too much to tolerate.

As a parent, you are entitled to respect from your children. After all, is that not what the fifth of the Ten Commandments is all about? If you do not put your foot down now, what message will that send to your younger children? Won't they see that as license to copy the same disrespect they see their older sibling display?

Finally, you are feeling hurt and deeply insulted. After all you have done for this child, it is the zenith of ingratitude for him to speak to you the way he just did. Has he forgotten all of the money you have spent for his education, clothing, summer camp, etc.? Does he not remember the hours and hours you spent chauffeuring him and his friends to and from school, ball games, parties, etc.?

You are on the verge of lashing out and answering back. You are about to tell your child what you really think of him. After all, you do not want him to get the impression that he can simply get away with treating you the way he just did.

In case you have the presence of mind and self-control to hesitate before you retaliate, you may be wondering whether responding in kind is the best course of action to take. Will it really help? And if not, what else can you do? How should you respond? Why is your child acting this way and what does it mean?

THE MEANING OF DISRESPECT

Some parents believe that their child's disrespect indicates a deficit in the child's understanding of the importance of respecting parents. In order to remediate this problem, those parents launch into a lengthy discourse designed to inform and educate their ignorant offspring. Others use more forceful tactics, such as shouting, insults and threats, to drive the point home. If you are one of these parents, or, if you know someone who is, you already understand how misguided and ineffective that strategy is.

Adolescents speak disrespectfully to their parents for two reasons: they are trying to flex their muscles of autonomy, and they are acting out their feelings of resentment and anger. Responding with punitive measures, therefore, will only serve to generate more hostility within the child as well as arouse stronger urges for independence.

DEFEND YOUR SPOUSE, NOT YOURSELF

Is it never appropriate to explain to a child that his tone or comments were improper? Is it not part of a parent's responsibility to teach a child the difference between right and wrong? It is not poor chinuch (education) to allow a child to continue speaking disrespectfully to a parent?

If your child speaks to you in an insolent manner and then you make any effort to correct that misbehavior, your child can attribute purely selfish motives to your actions. Your child may assume that you are demanding a level of honor that he feels you do not deserve. You are only looking out for yourself.

If you speak up for your spouse, your child cannot attribute egocentric motives to either one of you.

If, however, your spouse speaks up for you, or you speak up for your spouse, then your child cannot attribute egocentric motives to either one of you. Your actions are more likely to be viewed as altruistic and, consequently, the message you are trying to convey stands a better chance of getting through.

To be most effective, you should keep in mind the following points as you struggle to maintain your balance on the stormy seas of parenthood.

• All flare-ups should be avoided, as much as possible. If your child succeeds at getting a rise out of you with his discourteousness, it will encourage him to repeat his misbehavior again, in the future. It will reinforce the very behavior you are trying to eradicate.

• Silence does not confer license. Just because you stopped and walked away, does not send a message that you approve of the way you were just addressed. On the contrary, it indicates your displeasure in an understated yet more powerful way. It also eliminates any opportunity for confrontation and escalation of the conflict.

• If you can muster the patience - and believe me, I know that is easier said than done - try to address the underlying feelings of disappointment and hurt that generated the disrespectful comments in the first place. Something you did or said provoked your child. The sooner you can deal directly with that issue the better off you both will be.

Before you attempt this, however, you really need to be fully prepared to listen effectively. By effective listening I am referring to listening in a manner that makes your child feel heard, not in a way that enables you to refute his statements more successfully.

In order to listen effectively, therefore, you must be prepared to hear complaints without becoming defensive. That is not easy, but extremely vital.

Of course, you did not mean to be hurtful and, of course, your child is exaggerating the incident or misquoting what you said. If you mention any such mitigating or exonerating points, however, you will be perceived as seeking only to defend yourself from any blame or responsibility for the damage or hurt you caused to your child. This will enflame the conflict and not diminish it.

Try to understand what is really bothering him without contradicting, denying or debating the issue.

Your child is feeling resentment toward you. He is acting out those hostile feelings by speaking to you in a disrespectful manner. You can diffuse the confrontation by encouraging your child to express his complaints openly. But this will only succeed if you will really try to understand what is bothering him without contradicting, denying or debating the issue.

WHAT IS REALLY BOTHERING HIM?

While each family is and only your child can tell you what is really bothering him, it may be helpful for you to eavesdrop on the following complaints other adolescent children expressed to their parents in my office. In each case, the teenager had been speaking disrespectfully to one or both parents at home for some time before the parents turned to me for help. And in each case, the parents had first learned how to listen non-defensively so that their child would be willing to share his true feelings.

Abbie had this to say to his parents: "I can't stand the way you always think you know better about everything. And you can never admit that you made a mistake about anything. You only care about yourselves and my feelings don't fit into your equation.

"For example, when I told you I wasn't happy in elementary school, you didn't ask me what I didn't like or why I was unhappy. You just told me that I had to go to that school because that is where my older brothers went and that was it. That made me feel as if I was not a person. My feelings just did not count."

Ruth put her feelings this way: "It wasn't the fact that you hit me so often, but the way you did it that made me so angry. You would hit me in front of others. It was terribly embarrassing. You would lose control, at times, which really frightened me. And you would give me the impression that you just wanted me to suffer as much as possible each time."

Harold had this to say: "You were so critical of me when I was growing up that I had the feeling that no matter what I did it was never good enough. I remember bringing home tests with grades of 95 or 96 and you asking me why I did not get 100. You seemed to always find something missing or at fault no matter how hard I tried. At one point I simply gave up. I came to the conclusion that I could just never please you."

Hannah eventually blurted this out: "You so often say to me that I should move on and let go of the past. You want me to forgive you for how you treated me. You tell me that you did the best you could and you didn't know any better.

"I want to move on, too. I would like to have a better relationship with you. But, how can I forgive you for the past when you are repeating the same mistakes in the present? And how can I let go of the past when you have still not acknowledged the way you mistreated me?

"When I was younger, I thought all parents act the same way. Now that I am older, I know that is not true.

"You have repeatedly told me that it wasn't as bad as I say it was. I used to believe you. Now I understand that I was not the one distorting the truth. You have been denying the reality of what happened by trying to downplay and minimize it. When you finally acknowledge the full extent of what happened, maybe then I will be able to believe that you really do regret the way you treated me when I was younger." * * *

Abbie and Hannah have much more contact with their parents, yet still manage to steer clear of the insolence which peppered their previous interactions with their parents. This improvement resulted primarily from their parents' learning to listen more effectively.

Your impertinent teenager can end up letting go of his resentments, like Abbie and Hannah, or reinforcing his hostilities, like Ruth and Harold. Which road will be taken is determined more by you than your child. The steering wheel is in your hands. Try not to make a wrong turn.

Hanukkah: 8 Nights of Games, No Gifts

Why does God Make People Sick?