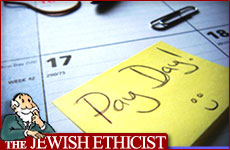 Make the extra effort to pay workers on time.

Q. I always try to pay my workers on time, but sometimes we are a little short. Do we have to borrow to meet the regular payday?

A. Paying workers on time is a high priority in the Torah. There is both a positive commandment to pay on time, and a negative commandment prohibiting delay. In the book of Leviticus (19:13) we read: "Don't defraud your fellow nor rob him; don't leave the worker's wages by you until morning." And in Deuteronomy (24:14-15) we find:

"Don't defraud the hired worker, poor and needy, from among your brothers, or from the stranger in your land, in your gates. On the same day give him his wage, let not the sun set on it. For he is poor, and he has his soul set on it; lest he cry against you unto God, and it be considered to you a sin."

In fact, based on the phrase "he has his soul set on it," the Talmud states: "Anyone who withholds the wages of a worker, it is as if he takes his soul away."

At the same time, the sages of the Talmud were aware of the practical limitations that can sometimes occur. If the employer doesn't have the money available, he is exempt from paying until he is able: "Could it be that the employer transgresses even if he doesn't have [the money]? The verse says '[don't leave the worker's wages] by you' – only when it is by you." (1)

By the same token, the Talmud there states that if the worker knows that it is customary that the employer will only have money to pay on a certain day, then the pay is due only on that day. This is the usual situation nowadays, when most employers don't pay on the last day of the month but rather a few days into the following month.

But these leniencies may not be exploited cynically. For example, it is not proper to hire workers if you know in advance you will not be able to pay them in a timely fashion. The Sefer Hachinukh (588), a commentary on the commandments, writes:

"The Scriptures didn't obligate him unless he has the money or is able to pay, but if he is unable to pay on the same day without suffering a significant loss, it seems that Scripture did not obligate him. Even so, any thinking person should make sure he will have the money at hand before he hires workers."

Since the Chinukh writes that the workers should be paid unless it will involve a significant loss, it seems that if credit is readily available money should be borrowed to pay them on time, and many authorities state this explicitly. (2)

I was once present when an employer consulted a well-known rabbinical authority about what to do since he had no money to pay his workers. The rabbi replied: Look under the floor tiles! Workers expect to be paid in a timely way for their efforts, and employers should leave no stone, or floor tile, unturned in order to fulfill their expectations. The exception is if doing so involves a meaningful loss.

The Jewish Ethicist - Stand Up for Elders' Rights

The Jewish Ethicist - Should I Blow the Whistle

The Jewish Ethicist - Wrong Store
G-d Time
Shavuot is The Holiday of Cheesecake and Blintzes
What Does Kosher Mean Literally?
Comments
MOST POPULAR IN Current Issues
Our privacy policy