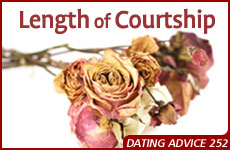 The pressure to become engaged can cause an unhappy marriage, or an unnecessary break-up.

How long should a courtship last? I have been going out with a great woman for six weeks. I see lots of potential, and honestly think I will probably marry her. But she is pushing for a very quick dating period and it is starting to freak me out. In our circles, most couples date for several months before they decide to become engaged.

The reasons why I would like more time is to familiarize her with my family and visa versa, and just to enjoy this period more. I see no reason to rush if we have the rest of our lives to look forward to.

I hope you can help me, because I don't want to throw away this great opportunity because I am a bit nervous.

A second question: I want us to meet each other's friends for the same reason, but she says it's not necessary. Can you give me advice on that too, please?

There is no ironclad rule as to how long a couple should date before they become engaged. That's because each couple is and even when a courtship is going well, the individuals involved can be at different stages of emotional connectivity, feelings about the rightness of the match, and readiness to make a commitment.

Sometimes an advisor -- parent, friend or teacher -- will pressure the couple to become engaged because "it's time," notwithstanding their uncertainty or lack of connectivity. In our opinion, it's wrong to exert this kind of pressure. It often results in unhappy marriages, and other times it results in unnecessary break-ups -- when the couple might have gone the distance if they were allowed to develop their relationship at a comfortable rate.

The period of relationship-building is an emotionally intense time. Daters are busy deciding how much they want to open up to each other, what details they should reveal (and what to hold back on revealing), how much they can trust each other, what they should be giving of themselves (and what they should be taking), whether they can accept the other person's idiosyncrasies, how much affection they have for this person, and whether the two of them have the foundations for a life together. That's a lot to process, and the processing occurs on both a conscious and unconscious level. Because each person processes at a pace, it often happens that one dating partner has already decided they've met their future spouse, while the other partner needs more time to reach the same conclusion.

We certainly don't mean that a man and woman should go out for a prolonged period of time without having any set goals or focus. However, if two people are dating for the purpose of marriage, feel their courtship has potential, and believe that it is progressing in the direction of their shared goal, they should continue moving toward reaching that goal without feeling pressure.

Your letter describes a courtship with great possibilities. At the same time, we can understand why the pressure you are feeling is starting to make you panic. You need more time, and you need to explain that clearly to the young woman you're dating.

We suggest you tell her that you think the courtship is going very well, and you feel that it is moving in the direction of marriage. Tell her that you sense she's further along in the process of figuring things out than you are, and that you hope she can be comfortable with you moving at a different speed. What's important is that you both get to the same place, and that your courtship continues to move in that direction without stagnating or hitting major snags.

This may be all she needs to hear. It will reassure her that you share the same goal, that things are indeed moving forward, and that you're hopeful about the future. Many couples who've consulted with us about this same issue found that after they discussed it in this manner, each of them felt calmer and less anxious, and the courtship progressed well.

As for the issue of meeting each other's friends: We know of many daters who avoid this because they don't want other people to know they are involved in a courtship, until they are on the verge of becoming engaged. Some people don't want to be the subject of gossip. Others don't want to deal with questions from friends who saw them together with someone they eventually stopped dating. And some are worried that their courtship might stir up jealousy that could lead to the breakup of the courtship.

We think it is important for daters to see each other with their families before they decide to become engaged, if this is at all possible, and it often is a good idea to meet some of each other's friends before engagement. This allows each of you to see another dimension about the other person and factor it into your decision as to whether you are right for each other. Since many people are sensitive about doing this prematurely, there is nothing wrong with arranging to meet each other's families and friends after you both realize that you're close to becoming engaged. This way it is still early enough if any alarm bells go off.

Why I Wear a Scarf1 min read