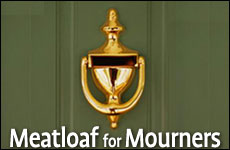 What to do (and not to do) after a death.

When I heard that Leslie's father had died, I thought, hmmm, what should I do? I honestly had no idea. Leslie and I belonged to the same congregation, but I didn't know her well. All I knew was that she was more religious than I was. Then again, who wasn't?

We had recently moved from Los Angeles to Portland, Oregon and had been hunting around for temples. Back in L.A. we had taken an Introduction to Judaism class because we realized that we had to pass down something to our new baby.

The class required regular attendance at a temple of your choice, so we went to a Reform one where we felt comfortable. Due to events that I won't bore you with, we spent a year in Vancouver, BC where Reform is more like Conservative. In this Reform "shul," they called it, you wrapped tefillin. To me, that was the height of piety -- strapping those black boxes on your forehead.

We were suddenly too religious for the Reform temple; us, who knew practically nothing.

When we moved to Portland, we were suddenly too religious for the Reform temple; us, who knew practically nothing. I thought of my father intoning the ultimate Yiddish put-down to all pretentiousness: "Ka-nocker." Look who thinks she's such a big shot.

The next weekend we went to the Conservative shul. Too big. We tried Reconstructionist. Instead of a rabbi, services were led by people like us, only wearing Birkenstocks. Jewish Revival? Too much music; I wanted to grab one of those infernal tambourines and break it over my knee. There had to be someplace for people like us.

"Oh no, not me! If you want to go there, you go alone!" That was my loving reaction when my husband suggested going to the Orthodox shul. He had taken a class given by the new rabbi there.

"But it's got one of those..." my hand made a frantic chopping sign. "Those things down the middle that separate the men from the women."

Long story short, I went and I HATED IT. I went again, and I cried through the whole service. "I miss L.A.!" I sobbed into my prayer book turned to the wrong page. I went again, and asked the woman standing next to me, "How do you know all these songs?"

She answered, "You just come." Oh, so easy. I heard my father's voice -- "Ka-nocker." Nothing's ever that easy for me. I can't whistle, I can't knit, and I sure can't learn to sing songs in Hebrew.

But we kept coming back, and not just because we'd run out of choices. I had never seen people pray with such sincerity. I knew I'd never be that woman in long sleeves rocking back and forth, but I envied her intensity, her belief that God was actually listening.

We had been going to Kesser Israel for about six months when Leslie's father died. Not knowing what to do for her, I called and asked. "Do you guys need anything? Dinner or..."

Her husband saved me, "No, thanks, we're fine."

I was off the hook, that is, until I heard that people were visiting Leslie while she sat shiva, the seven days of Jewish mourning. Cold as it may sound, I was not in the habit of doing things for people I wasn't close to. I was a good friend to my friends, and I did volunteer work for strangers, but this in-between status threw me. I forced myself to visit her, unsure of what I should do or say.

As I approached Leslie's door, I saw Sarah, another congregant coming up the walk. She was carrying a large tin-foil container.

"What did you bring?" I asked, ashamed of my empty-handedness.

Sarah smiled. "I made lasagna."

"Oh, I would have brought dinner, but Michael said they didn't need anything."

"I know, people never tell you."

"You just come," the singing woman had said. "You just do," Sarah didn't need to say.

Sarah walked in without knocking, like Snow White, and put her lasagna unannounced in the refrigerator. She had trouble finding room among all the other dinners that had been brought without being requested. I followed her into the living room where Leslie was sitting on a low stool. Sarah quietly hugged her and sat down. To compensate for this curiously mute moment, I told Leslie how very sorry I was for her loss. She smiled and thanked me.

Several months later I lost my own father. It was then that I learned about the custom of entering a shiva home without knocking -- to spare the mourner from having to get up to greet you. I also learned the reason for Sarah's initial silence; visitors let the mourner set the tone. She can speak or not speak. Or she can just cry. She's not a hostess at a party.

I deeply appreciated not having to hang up people's coats and offer them something to drink. My father was dead, I was sad, and they were there to support me in my grief. "They" were all the people in my congregation, people I loved, liked or barely knew. It didn't matter. They came because "You just come, you just do."

My refrigerator was full. If I hadn't been so depressed I would have enjoyed peeling back silver foil to reveal dinners I hadn't had to make.

Grateful and humbled, I realized what I needed: my own moment's notice shiva recipe. The answer appeared on page 117 of the kosher cookbook my best friend, Meredith, had given me: Meatloaf. It was quick, easy and best of all, comforting. I vowed to always have ground beef and aluminum tins on hand, and over the years, unfortunately, I've had many occasions to make it. Incredibly, I've also learned a few Hebrew songs along the way.


Preheat oven to 375. Mix beef with oatmeal, juice, onion, eggs and spices. Place in 9x5x3-inch loaf pan and spread ketchup on top. Bake for 1 1/2 hours until top is browned and meat is firm. Serves 6-8.

Robin Greenman lives with her husband, Adam, and daughter, Eleanor, in Portland, Oregon where they attend Congregation Kesser Israel. She's an advertising copywriter.

The Robot Within
In the Shadow of David and Goliath
Where Do the Laws of Nature Come From?
Saadiah Gaon, Rashi and Maimonides: How Three Rabbis Revolutionized Judaism
Comments