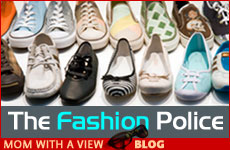 I'm grateful that my girls wear uniforms to school.

The problem of bullying is getting a lot of attention these days. And rightly so. Both the pain of the aggressor as well as that of the victim frequently has deep-rooted sources that need to be addressed. But have we gone too far when we now need to worry about "fashion bullies"? (See recent Wall Street Journal article, 10/25/07.)

Apparently it's a real issue in middle school. And it's not enough that working-class parents spend their hard-earned income on designer clothes (not to mention their precious time schlepping from mall to mall), they have to be the right designer. Just imagine the chagrin of wearing Dolce and Gabbana and finding out it was Juicy Couture that was in vogue that day. Or, in the case cited in the paper, Apple bottoms jeans and Air Force 1 sneakers by Nike (no commercial plug intended).

Teenagers who take pride in their non-conformity are perhaps the most conforming of all.

It's an inescapable irony that teenagers who take pride in their non-conformity are perhaps the most conforming of all. Everyone must dress alike -- in what the crowd deems cool. Acknowledging this reality eliminates one of the most pressing arguments against school uniforms, namely that clothes are an expression of individuality. Stand in any high school parking lot at the end of the day and try to seriously promote that theory.

I would even take it one step further. Why should clothes be such a significant expression of individuality? Shouldn't our personality be? Shouldn't our actions, our character, and ultimately our souls be the true reflections of our ness?

In a paradoxical twist, it seems to me that individuality is most marked in a school where uniforms are worn. Since the clothing no longer distinguishes one girl from the other, it has to be their behavior and their character traits that do. It's easier to notice who's always kind, who works hard, whose hand is in the air and who is eager to help when not blocked by clothing that screams "look at me".

And it's an important lesson for the girls (and boys too). If all that energy isn't needed for shopping and deciding what to wear in the morning, it can be focused on more important things like...sleeping in, I mean, like character development, like studying, like helping overwhelmed neighborhood mothers, like tutoring, like cooking, like helping their own overwhelmed mothers. Our daughters can run Chinese auctions for charity and after-school programs for younger kids. They can visit the elderly and the sick. They can develop into real mensches.

The amount of time and energy we all put into our appearances is staggering. Multiply by at least one hundred to imagine the life of an adolescent. It's a time when mirrors and scales should really be banned from all homes and public areas. I think it relieves our children of a tremendous social pressure to insist on school uniforms. Even if they balk, they benefit.

The Wall Street Journal piece suggests that girls may end friendships over another's poor choice of clothing. Even People magazine's section on style gaffes doesn't advocate such an extreme. Is this really how we want to raise our girls? Instead of lectures and workshops dealing with fashion bullying, why not eliminate it entirely? Don't we have more important things to deal with? Don't we have higher aspirations for our daughters?

I'm grateful that my girls wear uniforms to school. It saves time, it's easier on the pocketbook and most of all, it's easier on them. Don't all mothers and fathers want that for their daughters? It's up to us -- to pressure the schools and put up with the protests from our kids. The ultimate gain in character, peace of mind, and personal growth makes it worth it. Now if I can only figure out what the in-crowd is wearing on Sundays...

Ladies, Don’t Lose Sight of the Essence of Passover

Sharing Your Spouse’s Interests (Even When You Really Don’t)