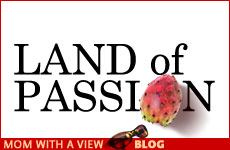 Life in Israel is like a giant roller coaster ride.

I brought a friend to Israel for her first time. Observing the crowds rushing through the streets, she commented that Israelis are like New Yorkers on steroids. Whatever the expression or analogy, everyone always recognizes the same thing. Israel is a country of dramatic contrasts and heightened sensitivities. Everything is more intense in the Holy Land.

Many psychologists believe that teenagers love roller coasters because they are a safe way of flirting with -- and ultimately cheating -- death. Life in the land of Israel is a giant roller coaster ride -- with death (by terror, war, or traffic) an all-too-real threat. Each moment is lived on high alert. There are screams of terror, and screams of delight.

Americans are more polite that Israelis. There's less shoving, pushing to the front of the lines, honking. And less risk, less to put your life on the line for, less that matters. Once you accept the reality of one, the other inevitably follows.

Everyone's philosophies are heightened as well. No one is as secular as a secular Israeli, no one as strict as the chareidim, no one as zealous as the "settlers". It's not a land for the quiet, the placid, the apathetic. It's a land for those who care. It's a land where everything counts. And ultimately it's a land where God is more real. Many of the layers that obscure His presence in other countries are peeled back here. You almost feel as if you can reach out and touch Him. (And so we push ourselves up against the Wall hoping to somehow merge with the Creator, to access His being).

After the Six-Day war, a prominent Israeli general asserted, "God had nothing to do with this victory." Given the miraculous nature of the battles, the statement seems ingenuous. But why say anything? Did Patton comment on the Almighty's role in World War II? God is so present here, He can't be avoided. He must be reckoned with. Even a denial requires His presence, the possibility of His engagement.

And so we push on. It's not a country for the feeble-hearted. Even our ancestors in the desert knew that. They were ambivalent about living in this land, uneasy with the intensity, all too eager to believe the reports of the spies.

No one yells, jostles and elbows you out of the way like our people in the land of Israel. And no one cares, loves, and puts their lives on the line the way they do either.

Many years ago a friend of mind was volunteering on kibbutz and touring the country on her day off. She and her companion missed the last bus out of Jerusalem one evening. Short of funds and concerned about being late for work the next day, they tried a more circuitous route, taking a bus to Haifa and hoping to catch the connection to the north. They explained their predicament to the bus driver, urging him to drive quickly. He began to yell and berate them, "How could you be so irresponsible? What were you thinking?" They were shocked and humiliated by his constant and (very) public attack. Yet when they missed the connecting bus, this same driver brought them home to his family, gave them dinner and a place to stay and returned them to the bus station in the morning. Only in Israel...

It's a land of highs and lows. On Shabbos, the main street in Jerusalem, Jaffa Road, is empty, a veritable ghost town. Two minutes after the end of Shabbos, the streets are so alive it is difficult to navigate through the crowds. It's is a land of joys and tragedies. A land of Jews from across the globe, and across the religious spectrum. It's a country of passions. It's a country that inspires love and hate. It's impossible to remain neutral. It's impossible to remain unaware. It's a place to bask in the Almighty's presence, to feel His love and respond to His demands.

As I said it's not for the weak of heart. Some of us can only come to visit. But if you choose it, it's the roller coaster ride of a lifetime. Only in the Holy Land, only among the Almighty's people, is such a vibrant and full life possible.

Happiness Is Not the Goal