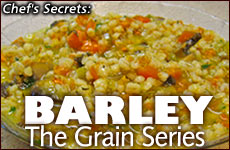 The most popular grains are barley, corn, millet, oats, quinoa, rice, rye, sorghum, triticale, wheat and wild rice. These grains are inexpensive and are a readily available source of protein and have more carbohydrates than any other food.

Barley is a hearty grain used in dishes ranging from cereals to breads to soups. Hulled barley has only the outer husk removed and is the most nutritious form of the grain. Scotch barley is husked and coarsely ground. Barley grits are hulled barley grains that have been cracked into medium-coarse pieces. Pearl barley has also had the bran removed and has been steamed and polished. It is good in soups, stews and cholent.

Barley and Corn Salad with Spinach and Green Beans

Cook beans in large pot of boiling salted water until crisp-tender, about 4 minutes. Drain. Transfer beans to bowl of ice water to cool. Drain well. Cut half of beans into 2-in. pieces. Transfer to bowl with barley. Mix in corn kernels. Coarsely chop 2 bunches spinach; add to bowl with barley mixture.

Barley with Caramelized Onions and Pasta

Heat oil in heavy large saucepan over medium-high heat. Add onions and saute until deep brown, about 15 minutes. Add barley and stir 30 seconds. Add mushrooms; saute until barley browns and mushrooms begin to soften, about 5 minutes. Add broth. Bring mixture to boil. Cover pan; reduce heat to medium-low. Simmer until barley is tender and broth is absorbed, about 25 minutes. Mix in pasta. Season to taste with salt and pepper and serve.

Place barley in heavy large saucepan. Cook over medium heat until pale golden, shaking pan occasionally, about 10 minutes. Add broth to pan and bring to boil. Reduce heat to medium-low, cover and simmer until barley is tender and broth is absorbed, about 35 minutes. Uncover and let barley cool.

Cube red, green peppers. Combine with mushrooms and barley in large bowl. Add tomatoes and next 5 ingredients; toss to blend. Season salad with salt and pepper.

Serve at room temperature. Arrange 6 spinach leaves on each of 4 plates. Top with barley salad.

Melt butter in a pot. Add vegetables and flour, stir 5 minutes. Gradually mix in broth. Bring soup to boil, stirring frequently. Reduce heat to medium and simmer until barley is tender and soup is beginning to thicken, about 40 minutes. Mix in parsley and dill. Season to taste with salt and pepper.

Add carrot and bell pepper; cover and cook until vegetables are tender, about 6 minutes. Remove pilaf from heat and stir. Cover and let stand 10 minute. Discard bay leaf. Season to taste with salt and pepper. Stir in lemon peel and serve.

On Thursday night, soak the white beans and chickpeas in cold water to cover. On Friday morning, first check for worms. Then, in a large heavy pot, saute the onions in the vegetable oil until translucent. Add the brown sugar and water and carefully caramelize the onions over very low heat. Turn off the heat until the remaining ingredients are prepared. Drain the beans and scatter them on top of the onions. Add cubed beef along with bones. Add barley with 1/2 tsp. salt and a few grinds of black pepper. Add kishke, onions, potatoes and eggs. Sprinkle with additional salt to taste, pepper and soup powder. Add water to cover, cover the pot, and bring to a boil. Then transfer the pot on a "blech" (a heated asbestos pad which many Jewish cooks use to keep Sabbath dishes warm) over low heat and leave until ready to serve.

Ever Thought about Giving a Kidney?1 min read

We Will Remember1 min read