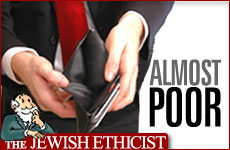 Helping the "not-quite-poor" with credit and discounts.

Q. Our medical institution gives free care to the indigent, and those with health insurance obtain care through their plan. But what about people who aren't really poor but don't have the means to get really adequate insurance? They fall between the cracks.

A. The problem of the "almost poor" arises in many contexts. Recently, Harvard College extended its financial aid package to solidly middle-class families. They concluded that the college had become a place for the rich (who can afford it) and the poor (who are eligible for extensive aid), but had emptied out of the middle class.

This problem exists in Jewish law as well. In fact, the mishna specifically states that there is a sharp boundary of eligibility for charity:

One who has 200 zuz [an amount sufficient for basic expenses for a year] may not take the dropped or forgotten sheaf, or the corner of the field [all these must be left for the poor] or the poor tithe. If he has even one dinar less and he is given even a thousand [zuz] in one sum, he may take it.

If [his assets] are liened to his creditor or to his wife's ketubah [support in case she is widowed or divorced], he may take. We do not compel him to sell his house or his [essential] furnishings. (1)

However, there are various alternative solutions to this problem.

First of all, we need to recognize that even in the case of the impoverished, Jewish law favors loans over gifts, at least when it comes to large amounts of aid. The dropped or forgotten sheaf and the corner of the field are generally small amounts which are enough only for subsistence; even the poor tithe is not usually a huge amount, and a thousand-zuz gift would be very unusual in practice. The very Torah verse which admonishes us to take care of all the needs of the poor speaks of loans, rather than outright charity:

When you will have a needy person from one of your brothers, in one of your gates in your land which the Lord your God gives you, don't harden your heart and don't shut your hand to your needy brother. Surely open your hand to him and lend to him enough for his needs, which are lacking to him (Deuteronomy 15:7-8).

So one practical solution is to offer people of limited means credit, by means of generous repayment terms, even if they are not eligible for a discount.

Another important consideration is that the commandment of charity is precisely "enough for his needs, which are lacking to him." Normally, a person with enough assets for subsistence is not needy, but a sick person has much greater needs. In this case, we fulfill the charity obligation even when we give to a person who would not normally be considered "poor", because in relationship to their extraordinary needs they are indeed lacking. So if it is possible to extend eligibility for aid to middle-class people who have extraordinary expenses this would be desirable

There is also an additional factor at work. Officially your practice defines the regular price as "full price", whereas indigent patients are treated pro bono. But in many cases the reality is that regular patients pay more than what the practice would charge if there were no pro bono cases, so in effect they are making two payments: one is a charge for service, the other a subsidy payment for poor patients.

"Poverty" has to be measured in relationship to a person's needs, and some medical treatments are enough to impoverish even a middle class family.

In this case, it would be fair to charge the patient of limited means only the "true" charge. (This is not the same as "at cost" since you are not deducting your profit, only the subsidy portion.) Jewish law has a clear analog to this. In general every person has to give charity; the most common custom is to give a tenth of one's income by analogy to the poor tithe the Torah imposes on farmers. If a person is poor, then instead of giving charity he receives it. (Jewish law actually states that even a poor person who lives on charity has to give a token amount to charity, (2) since giving charity is a basic human need which is itself "his needs, which are lacking to him".)

But there is also an intermediate category of someone who is not rich enough to give charity and not poor enough to get it. It is appropriate to charge such a person the fee that would apply if there was no need to subsidize poorer patients.

Jewish tradition encourages generosity towards others and obliges us to provide for the poor, but it also educates us to strive for independence. There is no general obligation to give charity to those who are able to make ends meet, even if they have to struggle a bit. But it is certainly desirable to help such individuals out with credit. In addition, "poverty" has to be measured in relationship to a person's needs, and some medical treatments are enough to impoverish even a middle class family. So when expensive treatments are needed even such a family may be considered "needy" for the purposes of giving charity.

Finally, while the almost-poor aren't eligible to receive charity, they are also not obliged to give it (beyond a token amount). So it is desirable to give such individuals a "discount" to credit them for any part of the regular fee which you would consider a kind of subsidy to enable you to provide pro bono services.

The Jewish Ethicist: Fair Pay
Korach 5782: Visit to Lift the Spirit
That Time The Ivy League Found A Way To Limit Jewish Enrollment
Would You Rather Be Right or Happy?
Comments
MOST POPULAR IN Current Issues
Our privacy policy