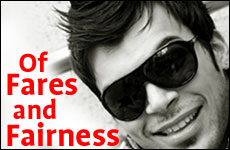 What you see is often not what you get.

If my husband hadn't been at my side, I never would have ventured into his cab. With his metal-studded leather jacket, spiked hair and silver earring, he wasn't the type to inspire a feeling of safety and security. But my husband had no qualms and we slid into the back seat.

We were on a vacation in Netanya for several days. My parents had invited us and our two children to join them on their summer holiday. We were all staying in a school dormitory that had been converted into a serviceable, if not luxurious, resort. During the day we had taken a fun family trip. After we had bathed the kids and bedded them down, my mother offered to keep an eye on them while we went to town. We'd had a lovely evening together relishing our aloneness, and now we had to head back. It was late at night, but we managed to hail a cab with little difficulty.

"Hi," the driver said in a genuinely friendly voice. "Where to?"

We named the school-turned-vacation-resort we were staying at and he started driving. Then I glanced at the meter. It was off. I felt my adrenaline running. This is one of the nastier tricks that some Israeli cab drivers like to play. They don't turn on the meter and then charge you whatever they want when you reach your destination. But I wasn't a greenie, I'd lived here for years and I wasn't going to fall for that one.

"The meter, please," I said in even tones.

"You're from another city aren't you?" the cabbie replied.

"Yes," I answered, rather puzzled, "and I'd really like to drive with the meter."

Sure, the cynic within me said, I'm going to trust you. Why on earth would I do that? But he went on to explain. "Here in Netanya, we have a different system. There is a set price for every destination. It costs ten shekel in the city center, 15 for the outskirts, and so on. It's 35 shekel for the school you need."

The price sounded right but I'd been burnt too many times. I was still leery. "Maybe we'll just take the meter anyway," I said.

The fellow shrugged. "Listen lady," he finally said. "I'll put on the meter, but I'm not going to charge you according to it. I just want to show you how badly you'd be ripped off if you'd do it that way."

I was mollified, and finally allowed myself to sit back and breathe.

After a moment he resumed talking. "Many cabbies would have jumped at your suggestion. They live off of strangers who don't know the system here. But I wouldn't do that. There's a God in the world. He knows the system, and I know that I'm not allowed to cheat. In any case, God decided at the beginning of the year how much money I'm going to earn. I won't earn a penny more than that, so why would I be dishonest?"

I listened in thoughtful silence. What struck me was not just his firm conviction, but the fact that he lived his life based upon those principles. Sure, many of us believe that God sets the amount we are meant to earn, and no amount of funny business will earn us a penny more. But do we act upon this, or do we try to pad our expense forms, leave side income off our IRS report, or even just slip a five year old into the zoo for free, passing her off as a four year old? Do we allow God into our synagogue and kitchen and somehow leave Him behind when we have to pull out our wallet?

This man -- spikes, metal jewelry and all -- was actually living what we were supposed to believe. He certainly seemed like a strange teacher, but this was Israel, and I long ago learned that what you see is often not what you get.

We continued driving in silence. Finally, we pulled up to the driveway of the school. He switched off the meter. "Fifty-four shekel," he said triumphantly. "You would have had to pay me almost 20 shekel more if we would have done it your way."

He turned around and gave us a brilliant smile. And it glowed far brighter than the earring in his ear.