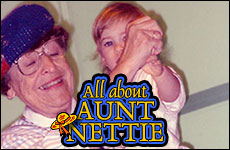 It's a rainy Saturday night. Aunts and uncles are pouring into my parents' living room, arriving from the five boroughs of New York City for another monthly gathering. Already in pajamas and observing the commotion from a crack in my bedroom door, I see Uncle Leonard and Uncle Herbie in animated conversation. Suddenly, the front door bursts open. In walks Aunt Nettie (Uncle Jack is just a few steps behind). Within seconds, her dripping coat still on, she strides up to her two kid brothers, snatches their eyeglasses and proceeds to clean them with a rumpled tissue, buried moments ago in her pocketbook. Leonard and Herbie keep talking; like me and every other myopic member of the family (that means practically all of us), they're used to this.

That's Aunt Nettie. You might call her the mother hen of the family. But ironically, Aunt Nettie was never a mother. She and Uncle Jack were unable to have children.

Still, Aunt Nettie most certainly experienced motherhood. How? By perfecting the role of professional aunt.

Being a professional aunt means many things, among them: always having a supply of brand new balloons in your purse; never visiting without bringing along some home-made sponge cake; and reading a How I Spent My Summer Vacation essay and pronouncing its author the next Hemingway. But Aunt Nettie had carried the art of professional aunthood to rare heights. I know. I was uplifted by it many a time.

Aunt Nettie came to the rescue for years after I contracted polio back in the 1950's. Week after week, she'd take a two-hour subway trip from Brooklyn to a hospital in Upper Manhattan (Aunt Nettie never learned to drive) to see me. As soon as she entered the children's ward, her hat always askew, she'd get busy devising ways to entice me to eat. Once, she rummaged in her huge shopping bag and pulled out a bunch of seedless grapes. "All right, young lady," she announced. "Let's see how many of these we can stuff into that little mouth. Maybe we can break a record." And she proceeded to cram grapes into my mouth until my cheeks were stretched to the limit. With all the giggling that ensued, I barely noticed that I was getting vital nutrition at the same time.

Then came Aunt Nettie's piece de resistance. She'd rummage once again in her oversized bag and, with a flourish, unwrap mouth-watering lamb chops. At the age of seven, I was too young to know the exorbitant cost of this delicacy. But if I had asked, "Aunt Nettie, aren't lamb chops expensive?", I am sure she would have answered, "Nothing is too extravagant for my niece!"

One did not need to land in the hospital to get this kind of royal treatment. My cousin Mimi remembers that Aunt Nettie appeared on her doorstep (following another two-hour subway trek) every Thursday for the first five years of her life. "Out came her bag of balloons," Mimi recalls. "The four of us would pick out our favorite color and Aunt Nettie would blow each balloon up with great fanfare."

"And what about the smiling rolls?" Mimi's brother Josh adds. "Aunt Nettie would always bring them, fresh from the bakery. And if we started misbehaving, she'd pull one out and say, 'Are you going to turn these smiling rolls into frowns?' Her strategy always worked."

As her nieces and nephews got older, breads and balloons were replaced by more serious fare: most notably, newspaper clippings that might contribute to a term paper. Even though I hadn't written a term paper in decades, Aunt Nettie was still sending me clippings in 2002.

That was Aunt Nettie, a woman who went unsuspectingly to her surprise 50th wedding anniversary celebration when told that she would be attending a party for her youngest nephew. When she got there, she and Uncle Jack found a packed hall of admirers ranging in age from 86 to 18 months. My guess is that Aunt Nettie had been mother to all of them at least once.

During the festivities, and the speeches that interrupted them, it dawned on me that I knew very few specifics about my aunt. I learned that she enrolled in Brooklyn College's evening session at the age of 40; ten years later, she had in hand her bachelor's degree in elementary education. Not content to rest on her laurels, she promptly pursued a master's degree. At 55, when most of her contemporaries were contemplating retirement, Aunt Nettie began her career as a substitute teacher in New York City's public schools. For over 20 years, this professional aunt served as surrogate mother to hundreds of underprivileged children.

I'd always loved Aunt Nettie but I'm ashamed to admit that until that gala anniversary party, I rarely gave her personal life a second thought. But I soaked up all the speeches that night, and the data they contained, as if my life depended on it. You see, it was 1988. I was 36 years old and, like Aunt Nettie, a professional aunt. Like Aunt Nettie, I had to confront childlessness. Doctor after doctor recently had told my husband and me that we could never be parents.

Aunt Nettie became a major preoccupation. I began to wonder, how did she cope with Mother's Day at my age? Did she cry into her pillow, as I often did? Did family gatherings, with siblings' children running amok, break her heart?

If they did, that was her secret. No one could have guessed because her smile was ever present. Embarrassed to broach the subject with Aunt Nettie when she had never alluded to it, I turned to her sisters and brothers for answers. As I should have expected, I was told that she never discussed the matter, she never acknowledged the pain. Instead, as one sibling put it, she immersed herself in other people's pain. And those people, spanning four generations, rarely if ever detected hers.

As an icebreaker, Aunt Nettie often asked youngsters, "So, tell me, what is your favorite prayer?" She'd listen intently to the reply, nodding slowly with lips compressed in concentration. Not surprisingly, she'd always confide in return, "My favorite prayer is Modim anachnu Lach." [We are grateful to You, a portion of the Shmoneh Esrei]. She bore God no grudge. And to prove it, she and Uncle Jack fulfilled the very last of His 613 commandments, one which very few Jews ever accomplish: the writing of a new Torah scroll.

Commissioned in honor of their 50th wedding anniversary, that Torah scroll was ushered into Aunt Nettie and Uncle Jack's synagogue with all the pomp and elation associated with a wedding ceremony. A couple who had never known the joy of escorting a child down the aisle marched along Brooklyn's Avenue J, a chuppah [wedding canopy] overhead, trailed by hundreds of well-wishers. And in Uncle Jack's arms was the Torah that he and Aunt Nettie had brought into existence, the Torah that they loved as if it were their child, the Torah that -- as their child would have been -- was a link to the eternal.

Together with Uncle Jack, Aunt Nettie also donated an ambulance to Israel's Magen David Adom, stating in her innocent optimism that she hoped it would only be used to take pregnant women to the hospital. As she aged, especially after Uncle Jack passed away in 1997, she herself was rushed to the hospital on many occasions. In the last painful months of her life, a young doctor asked her if she was occasionally depressed. "Oh, no, doctor," she replied. "You see, I'm Jewish. I know that everything comes from God."

"Depressed? Oh, no, doctor," she replied. "You see, I'm Jewish. I know that everything comes from God."

Sixteen years have passed since I celebrated Aunt Nettie and Uncle Jack's 50th wedding anniversary, simultaneously choking back tears of identification. Since then, my husband and I, to our doctors' astonishment, have been blessed with two miracle children. They too grew up with Aunt Nettie's weekly visits, replete with her balloons, smiling rolls, sponge cakes, blintzes, newspaper clippings -- and her complimentary eyeglass cleaning service.

In March, Aunt Nettie passed away at the age of 92. There were no children left to mourn her. But during the shiva week, her great-great niece gave birth to a baby girl, who was promptly and proudly named Nechama, Aunt Nettie's Hebrew name.

Alone in Lenox Hill
In the Shadow of David and Goliath
Where Do the Laws of Nature Come From?
Saadiah Gaon, Rashi and Maimonides: How Three Rabbis Revolutionized Judaism
Comments