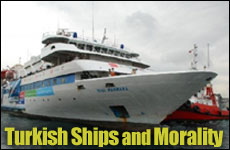 Facing worldwide hypocrisy, this is a time we need to stand together.

With the recent events on the Turkish sponsored "peace flotilla," Israel has once again been tossed into another lose-lose public relations game. Had Israel refrained from acting, as the self-declared moralists of the world demanded, then Israel certainly would have won a few brownie points for good behavior. However, this momentary prize would have come at the very steep price of further strengthening Israel's regional enemies who would have interpreted inaction as another sign of Israel's declining strength. Of course by taking the initiative and acting, not surprisingly the floodgates have been opened for the very predictable condemnations.

Anyone who possesses even a shred of honesty knows quite well that this whole event was nothing but a provocation against Israel. Therefore Israel, and the entire Jewish people with them, should not run like usual to apologize or to condemn the actions of our soldiers but rather should stand together in the face of our enemies. That people were killed is unfortunate, but Israel is certainly not responsible and in no way should we be fazed by all the hypocritical condemnations. There are threats all around us here in Israel, real dangerous threats, so this is not the time to become unraveled by acts specifically designed to unravel us.

If anyone is not convinced of the hypocrisy here, or of the fact that most of the world just doesn’t care, then perhaps we should take a look at the story of another ship that was connected to Turkey. Although long before the advent of internet and therefore less known than the current story, this maritime drama was certainly no less tragic.

Very briefly, in late 1941 nearly 800 Romanian Jews boarded an old and dilapidated ship called the Struma in an attempt to escape from Nazi Europe and make their way to Palestine. The first stop of the ship was in Istanbul, Turkey, which also turned out to be the final stop. With the British pressuring Turkey not to allow the Jews to continue on their voyage to Palestine, and Turkey refusing to allow the Jews to disembark since they didn’t possess visas for Turkey, the Jews were stuck on the overcrowded ship for nearly ten weeks while various solutions were discussed. Due to the wretched conditions on the ship, pleas were made to move the Jews to temporary transit camps that were to be completely funded by Jewish organizations. Nonetheless, the pleas fell on deaf ears with the Turks. Finally, the drama was ended when the Turks unexpectedly decided to tow the ship back into the Black Sea without fuel, food or water. Within a few hours the fate of the nearly 800 men, women and children was quickly sealed when the torpedo of a Russian submarine sunk the defenseless ship. There was only one survivor.

In the face of such lack of concern and hypocrisy, both 70 years ago and today, it’s time that the Jewish people, all of us, stand together as one against our enemies and stop being so influenced by their hypocritical condemnations and phony calls of morality.

This article was originally published by Pajamas Media.

Yoel Meltzer has an MA in Middle Eastern Studies and lives in Israel.