The Jewish Ethicist - I Spy 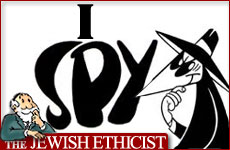 Can I spy on my spouse and monitor his internet use?

Q. I'm very concerned about the internet habits of my spouse. There are so many immodest sites and stories of intimate chats. Is it ethical for me to use clandestine means to monitor internet use?

A. Certainly we hear many dismaying stories of relationships strained by internet use. This includes not only "adult" sites but also internet friendships that sometimes seem to crowd out domestic intimacy. It is understandable why someone would want to monitor spouse internet habits, if only to be reassured that everything is fine.

We seem to find conflicting sources in the Talmud regarding the desirability of such monitoring. On the one hand, we find that the Talmud considers the fear of discovery to be a valuable and desirable aid in helping people overcome temptation. While Jewish law forbids a man and woman who are not nuclear family members to be together in a secluded place, the Talmud tells us that if there is a door open to a public thoroughfare it is permitted. While it is relatively unusual for someone to barge in unannounced, the very possibility that this could occur is considered enough to remind the couple of the need for modesty. (1)

Yet we seem to find the opposite point of view in the following passage: "Seven things Rabbi Akiva instructed his son Rabbi Yehoshua: . .Don't enter your house suddenly, so much the more your friend's house." (2) Another passage counts entering suddenly into one's house among acts which are "hateful". (3)

The great early authority Rabbi Shmuel bar Avraham explains that sudden approach should be avoided because one's household members may be engaged in some private activity. (2) It seems from this that it is wrong to create the threat of sudden entry to deter the negative kind of private activities.

One thing we can notice right away is that neither of these sources refers to totally clandestine observation, only to the possibility of sudden discovery. It would seem that totally secret surveillance would be considered a breach of privacy as well as a breach of trust. At the very least any means of supervision used should be known to the family member. Even when the possibility of sudden entry is considered a positive force, this is because it deters the harmful behavior in the first place, not because it enables us to catch perpetrators red-handed.

In my opinion, there is no real contradiction between these two sources. For most kinds of improper behavior, the possibility that someone could arrive suddenly is a deterrent even if the person gives a brief warning. Again, the objective is not to catch people in the act but only to deter them and remind them that their behavior could be observed or perhaps merely inferred. The conclusion is that it is a good check on misbehavior to know that someone could come on very short notice, but without barging in.

I think that totally clandestine means are inappropriate for any family members. For young children, who need a great deal of supervision and are often even grateful for it, there is nothing wrong with installing some kind of monitoring software, but they should be notified in advance. This is an educational step only when you explain to them that the object is not to catch them in misbehavior but rather as an aid to keep them on the right track.

With regard to a spouse, I would consider even announced surveillance an absolute last resort when the person recognizes there is a problem with his or her behavior. As a monitoring strategy, the best thing is just to pop in every so often when your spouse is using the computer. Don't tiptoe, but approach normally, knock briefly and come in. This kind of habit communicates positive concern, not negative suspicion.

For the same reason I also recommend that all spouses, and especially husbands, be proactive in forestalling such worries by using the computer in a place which is easily accessible and being accepting and understanding about occasional kibitzing. Again, recognize that this shows love and concern. This was discussed in more detail in a previous column.

The Jewish Ethicist: When Parents Disagree

The Jewish Ethicist: Watch Your Mouth