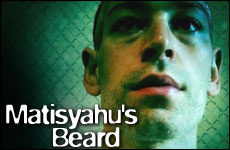 I grew my beard as an expression of Jewish pride, not as a response to weakness.

This morning I posted a photo of myself on Twitter. No more Chassidic reggae superstar. Sorry folks, all you get is me…no alias. When I started becoming religious 10 years ago it was a very natural and organic process. It was my choice.…. At a certain point I felt the need to submit to a higher level of religiosity…to move away from my intuition and to accept an ultimate truth. I felt that in order to become a good person I needed rules—lots of them—or else I would somehow fall apart. I am reclaiming myself. Trusting my goodness and my divine mission…. Matisyahu.

In a subsequent interview with WNYC radio, the Grammy-nominated singer explained that he remains observant but underwent a transformation. He kept the long beard, he said, out of fear that removing it would result in being denied God’s mercy. He overcame that fear and no longer needs facial hair.

As one who appreciated his music and loved his message, the tweet gave me pause. It brought me back to the day that I, too, shaved my beard.

I grew a beard when I was 21 years old. A fledgling rabbinical student with a pronounced speech impediment, I had just finished the most depressing year of my life. The intensive speech therapy program I had engaged in was failing, and the yeshiva I attended beheld a culture I could not embrace. It was time for a new beginning. I was going to Israel to attend the renowned and revered Mir Yeshiva. Throughout my darkest moments, I craved - and felt - a special relationship with God. But within that relationship it was time for renewal, time for a new tempo to the song of my life.

My flight to Israel was scheduled for late summer. “The Three Weeks,” a time when Orthodox Jewish men don’t shave to express mourning for the destruction of the Temples, fell a few weeks before my departure. Already adorned by red stubble, I chose to not shave and let it grow into a red beard.

Life is replete with symbols. The clothes we wear, the company we keep and the haircut we sport, each express the person we are and the person we want to be. Teenage boys wearing hair combed towards their forehead appreciate this, as do scientists sporting unkempt hair and shaggy sweaters. I did, too. The beard – the male expression of maturity – defined my commitment, devotion and determination to connect with God anew. It was a new look and a new beginning.

I kept the beard for two years, throughout my stay in Israel. By then I felt much better inside and outside. I met people who were both friendly and Godly, my studies were progressing, and I found friends who understood me and rabbis whom I understood. Just before I came home to the States, the Remington came out and the beard came off.

I kept the beard off for three years. Then I met my soul-mate, married and chose a career in the field of Jewish education and outreach. One month after our wedding was sefira, when Jewish men don’t shave to commemorate the loss of the academy of Rabbi Akiva to a plague, in 150 CE. The beard grew again, and it's been on ever since.

I feel comfortable with it because it was added as an expression of Jewish pride, not as a response to weakness. Judaism is my life. And I don’t intend to remove it.

Matisyahu remains an observant Jew and, even more, a keeper of the beard does not make one a keeper of the faith. But it would be remiss to ignore that it was the beard which made Matisyahu a sensation. The removal of the beard occurred because Matisyahu no longer saw in it the symbolism that the media and his fans saw in it. A clean shaven white guy doing reggae, no matter how clever and talented, would not have made it to the Jimmy Kimmel Show.

The world knows that the Orthodox Jew speaks to mankind. The wise, sagacious rabbi envisioned by our greatest admirers is bearded, as is the evil, world-dominating caricature concocted by anti-Semites.

What does the Orthodox Jew say to the world? He says that God is infinitely engaged in creation. He says that God calls mankind to self-regulation, to commit to absolute values, to break the idol worship of self and to build and dignify the institution of other. He speaks of the deep richness of the Godly and the fleeting pleasures of the worldly, imploring mankind to choose spiritual fine wine over material candy. He says that the battle between good and evil exists and persists at all times, in the world and within our lives. And he proclaims that ultimately our good deeds will usher in a Messianic era when all mankind will recognize God as Creator and loving Father.

Orthodox Jews know the message, and it was the medium of Matisyahu that helped to bring it to the masses. I will miss Matisyahu’s beard. And pray that others – with or without beards – learn to express, as Matisyahu did, a craving for the Divine, absolute values that are sublime, to help turn the tide for a great nation in moral decline.

This article first appeared on www.jewishworldreview.com.

The author of two books, Yaakov Rosenblatt is a rabbi and businessman living in Dallas, Texas.

Everything and Its Opposite Is Given as a Reason for Antisemitism
The Blue Beyond
Great Place to Live
Is Eating Supposed To Be Spiritual?
Comments
MOST POPULAR IN Israel
Our privacy policy