The Jewish Ethicist - Revealing a Secret 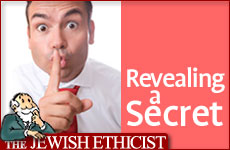 Should I tell my boss about my students' impending protest?

Q.After I taught my students about the importance of avoiding waste, they decided to organize a protest against wasteful practices at the school. They asked me to keep their secret in order to maximize the impact of their protest, but I have an obligation to my employer to inform them of disruptions. Should I respect their request?

A. In many cases, the decision between keeping a secret and preventing harm is a wrenching one. Overall, Judaism encourages keeping secrets. "One who goes about as a gossip reveals a secret, but the faithful in spirit conceals a matter" (Proverbs 11:13). Of course when disclosing the secret information could protect someone from harm, as in this case, we encounter the obligation to protect others from loss: "Don't stand idly by your fellow's blood" (Leviticus 19:16). But sometimes even potentially harmful information has to be kept secret because without a commitment to secrecy the information would never be revealed. This is relevant for example to lawyers, counselors, and some health workers. The Talmud teaches us that in such cases only extreme exigency justifies disclosure. (1)

But in this case, the dilemma is absent. Your students did not demand your silence as a condition for revealing their plans; indeed, you did not solicit their revelation at all. They should even be aware that you have some obligations to disclose potential disruptions to the administration.

Another reason that you are not obligated to secrecy is that the students' plan is improper. If by threatening to reveal it you will frustrate their plan then you are doing the right thing.

Jewish tradition does acknowledge that there is an occasional place for disruptive protest. A classic example is the following passage from the Talmud:

The wicked kingdom [Rome] decreed destruction on Israel, that they should not occupy themselves with Torah, and should not circumcise their sons, and that they should desecrate the Sabbath. What did Yehuda ben Shamoa and his fellows do? They asked the advice of a matron who was frequented by all the Roman leadership. She said to them: Go and protest at night. They went and protested at night. They said: For heaven's sake! Are we not brothers? Are we not the sons of the same father, and are we not sons of the same mother? How are we different from every other nation and tongue that you make evil decrees on us? And they cancelled them. (2)

We see in this story the eternal essence of a demonstration: it is annoying (no one likes to be awakened in the middle of the night), but the true object is not to disturb others but in order to attract their attention in order to obtain their sympathy with a message of identification. There is an inherent element of provocation, but this is precisely meant to show that the protester is so certain of the underlying bedrock of solidarity that he is willing to risk a little annoyance. Yehuda wanted to force his Roman neighbors to say to themselves: We must have done something terrible if it has caused an upstanding human being like Yehuda ben Shamoa, with his message of brotherhood, to risk our ire.

But our tradition equally teaches that such disruption is considered an absolute last resort, not a first one. After exhausting the usual, transparent channels of direct communication, sometimes a person has no recourse except to bring attention to his plight through a more disruptive action. In this case, the magnitude of the imagined misdeed is in no way comparable, and the students have not made even the slightest effort to learn about possible justifications for school policy or to make constructive efforts to improve it.

The Torah tells us, "Surely reprove your fellow, and don't bear sin towards him" (Leviticus 19:17). The commentators explain that the reasoning behind this commandment is that the suspected wrongdoer should first of all have an opportunity to explain and justify his actions; if he is convinced that they are wrong, he should be informed in a gentle and dignified fashion; otherwise the critic will "bear sin towards him". This admonition applies even more forcefully towards the school administration, which is due a special degree of honor.

By the same token, you should take up the matter with your students in a delicate and dignified fashion. Engage them in discussion to see why they think their divisive tactics are appropriate and try to convince them that what is needed is conversation and not confrontation.

The Jewish Ethicist - Predicting the Future
For Every Individual, A Torah Scroll
Allegiance To The Monarch
Meet the Real You: Yom Kippur
Comments
MOST POPULAR IN Current Issues
Our privacy policy
Aish.com Is Looking for Great Writers