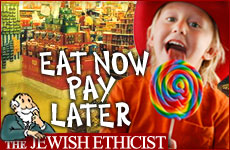 Can I open kids' treats in the supermarket and pay at checkout?

Q.When I take children to the market I often give them a treat before I pay to keep them quiet. Is this proper?

A. The case of taking someone's property with the intention of paying afterwards is discussed in two main Talmudic passages. Let us see how the nuances of these passages can shed light on your dilemma.

In a seemingly similar situation, the Talmud asks if it is possible to feed one's animals from a stranger's field with the intention of paying afterwards. The conclusion is that this is forbidden. A Scriptural allusion is found in the verse: "If the wicked will return his theft, he has gone in the laws of life" (Ezek, 33:15). The future tense is interpreted literally: if he WILL return his theft, he is still called wicked (at the time of the theft itself). (1) The evident justification for this prohibition is that the owner may not find this arrangement advantageous. He may not be interested in getting payment, preferring instead the object. Also, a future promise of payment is not very attractive.

Based on this rationale, the distinguished early authority Rabbi Asher ben Yechiel writes that if payment is ready and the owner is clearly willing to sell it is permissible, "for instance, an object which is for sale." (2)

From this point of view there is no objection to your behavior. The merchandise you take is clearly intended for sale, and your don't plan to pay for it at some unspecified future time but rather immediately as you leave the store -- exactly as you would have had you bought without opening. For this reason many stores don't have any objection to occasional cases of "eat now pay later".

However, there is another relevant consideration which we learn from a different passage in the Talmud. The Torah commands "Don't steal" (Leviticus 19:11.) The Talmud infers from the categorical nature of this commandment that stealing is forbidden under all circumstances. Stealing is prohibited even if the intention is to return the stolen object and pay the requisite fine, which would seem to provide an unambiguous benefit for the "victim". (3) Maimonides explains that this is "lest he become accustomed" (4). This is a common theme in Jewish sources: taking advantage of seeming loopholes in prohibitions is often prohibited since this tends to weaken our natural aversion to wrongdoing. By the time a person steals a few times as a practical joke and a few more times as a way of "rewarding" the victim with the payment of the fine, stealing doesn't seem to him a very serious transgression, and it will be easy to find additional justifications and rationalizations.

I think this consideration is definitely valid in the case of buying from a supermarket. The items are not neatly arranged and easily observable, and a customer can easily slide down the slippery slope into an "easy-come, easy-go" attitude towards paying – not to mention the mess. Therefore, even in supermarkets which do not object when you eat first and pay later, I think that this should be done only when there is a compelling reason, for instance the example you give of keeping young children quiet. And of course the wrapping must be scrupulously preserved so that the cashier can easily scan the item without getting a hand full of gook and drool.

The Jewish Ethicist: True to Your Word

The Jewish Ethicist - Garage Sale Gem
In the Shadow of David and Goliath
Where Do the Laws of Nature Come From?
Saadiah Gaon, Rashi and Maimonides: How Three Rabbis Revolutionized Judaism
Comments