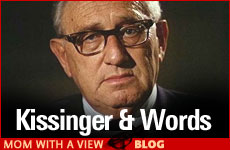 Will your words come back to haunt you?

Now that the storm has died down over Henry Kissinger (“Henry Who?’ asked my kids), it may be appropriate to reflect more soberly on the recent revelation of his ill-chosen (to say the least!) words. As we all now know, while acting as Nixon’s Secretary of State, Kissinger spoke very cavalierly about the gassing of Jews. “If they put Jews into gas chambers in the Soviet Union, it is not an American concern.”

Yes, he has an explanation. Yes, he has apologized. But the words were said. They can’t be taken back – and no description of the context, the circumstances, the time and the place – can change that.

Words have power. This is emphasized throughout the Torah. What we say means something. Our words are a reflection of who we are. And words can hurt. Badly. Deeply. Irrevocably.

The words of people in positions of power and leadership are even more powerful. They shape policy, they affect nations; they alter the course of history. Not always for the worse. Everyone is inspired by the words of Martin Luther King Jr.’s “I have a dream” speech. They lift us to a better place, to the kind of people we’d like to be. John F. Kennedy’s “Ask not what your country can do for you…” is another example. Even Detroit Tigers pitcher Armando Galarraga, denied his place in history for pitching a perfect game, only had words of compassion and understanding for the umpire who mistakenly spoiled his chance. He used his words to heal tensions instead of inflame them.

Yet stacked against this positive use of the power of the tongue are not just the destructive speeches of Hitler, Stalin and Mao but the vitriol of Helen Thomas or the Reverend Jeremiah Wright.

Words make a difference. Each of us in our own little world affects those we care about through the way we speak and the things we say.

We all have to choose our words carefully. We all have to be like the wise man in Ethics of Our Fathers who foresees the consequences of his words and deeds.

I don’t know if Henry Kissinger’s career would be considered illustrious or not. I don’t know if he was a good or wise or thoughtful Secretary of State. But fair or not, he will be remembered for those words on that tape, the words that seemed to suggest a completely lack of empathy for or identification with the plight of his fellow Jews.

And it’s sobering for every one of us. We all need to watch what we say. We want to our words to make us and those who know us proud, not to, God forbid, come back to haunt us.

But I Was Only Joking: When Teasing Hurts
Near Death Experience Panel
The Western Wall: The Heart of the World
Ask the Right Question: Tisha B’Av
Comments
MOST POPULAR IN Family
Our privacy policy
Aish.com Is Looking for Great Writers