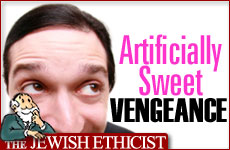 We must pursue strict justice, but we don't rejoice in it.

Q.Some time ago a person wronged me. Recently I heard a misfortune befell him, and I was distressed to see that I had a sense of satisfaction at his suffering. What does Judaism say about this feeling?

A. Virtually all of us know the feeling of morbid satisfaction at the suffering of someone who has wronged us. This sentiment, akin to a feeling of vindication, is different from, and more understandable, than a general feeling of glee at the misfortune of others. Being happy at others' misfortune, sometimes described as schadenfreude, is simple misanthropy – antipathy for mankind. Certainly this does not need to be explained or justified.

We can however muster some understanding for someone who sees some kind of poetic justice in the suffering of wrongdoers. Even so, the Torah educates us to eliminate all such feelings. The verse begins, "Don't act vengefully" -- punishing someone who has wronged us, but then continues "and don't bear a grudge"(Leviticus 19:18).

The book of Proverbs deals directly with this sentiment, stating: "One who rejoices in [another's] calamity will not be absolved" (Proverbs 17:5). This too does not refer only to gratuitous schadenfruede; our tradition always understands this as referring to a person who was wronged by the victim. Even so, we are forbidden to rejoice in his suffering. The commentators often connect it with the parallel verse "Do not rejoice in the suffering of your enemy" (Proverbs 24:17). (This does not necessarily apply to someone who repeatedly and gratuitously harms others, and who has not repented.)

The reason that this sentiment comes to us so naturally is due to our sense of fairness and justice – we feel it is only fair and right that a wrongdoer should be punished. Indeed, this justification is so logical that we may ask, why does Scripture condemn this sentiment?

In order to understand this, we need to understand two concepts that are central to the Jewish understanding of God's providence in the natural world: justice and mercy. The element of "justice" does not just refer to reward and punishment, but also to the laws of nature or any blind system of cause and effect. Justice is often depicted as blindfolded because we uphold an ideal of "blind justice"; we want the punishment for a crime to be a natural and non-judgmental consequence just as getting cut is a natural consequence of stepping on glass.

The attribute of loving-kindness, by contrast, is completely personal: it means seeking to benefit and delight each individual, according to his own nature and inclinations.

As science learns more and more about the astonishing scope of the lawfulness of nature, it occurs to many that the world is sustained solely through the working of cause and effect – the attribute of justice. But Rashi explains that such a world is not sustainable. Loving-kindness is a vital ingredient. Not only that, Rashi writes that God gave precedence to this attribute. The essential purpose of the world as God created it is to benefit each creature. However, it was still necessary to make justice a partner. Without justice too the world cannot survive; this was obvious from the very beginning. In God's plan, the laws of cause and effect, as well as the laws of reward and punishment, are a means to an end; they are necessary to keep the world functioning so that it can attain its primary aim of beneficence.

We are commanded to pursue justice, even blind justice. The Torah warns us, "Don't do any distortion in judgment; don't show partiality to the lowly, nor elevate the great. Judge your fellow with righteousness". (Leviticus 19:15.) But we do not rejoice in justice. The Talmud tells us that members of a court that sentences someone to death must fast that entire day. (1) Certainly they do not regret their action; it is the solemn responsibility of the court to try people for their offences and dispense impartial justice. But it is still a sad event when a fellow human being is killed.

A person who is wronged is sometimes inclined to see something fitting in a misfortune that befalls his wrongdoer; it seems like justice is done. But our tradition condemns this sentiment. Even when we are commanded to punish wrongdoers, we do not view it as a privilege but rather as a regrettable, necessary evil. Certainly when misfortune comes by chance our primary sentiment should be dismay at the suffering of a fellow human being.

The Jewish Ethicist: "I Quit!"

Taking Credit
The 21st President of the United States: Failure or Inspiration?
Hiding Their Jewishness
The Jewish Pope: Following the Questions Home
Comments