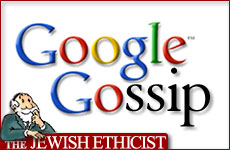 If it's on the web, isn't it no longer private?

Q. Recently you wrote that it is improper to pry into someone's private affairs through a web search. What can be wrong with this given that all the information is already publicly available?

A. In a recent column I discussed the now-ubiquitous phenomenon of doing web searches on potential business partners, dates, hires, etc. I suggested that a simple web search is fine, because the kind of material found there is generally harmless, or very widely known, or can be easily removed since search engine finders have become somewhat more sensitive to the need to allow people some control over what web pages are publicly searchable.

However, I wrote prying further by using ingenuity or specialized "private eye" web sites is improper. I will try to clarify my reasoning while relating to this reader's question.

In its simplest form, the prohibition on idle gossip involves spreading damaging information on someone. In order to extend this idea to doing a detailed web-search, we need to fill three missing links:

The first link was joined in the earlier column by reference to the laws of "sight damage". The essence of this prohibition is that ongoing invasion of privacy is considered like a kind of tort. Even activities that are not secret, and can be casually noticed by passers-by, are protected from close scrutiny by neighbors, who can watch more or less constantly.

There is an equally valid source for this extension of the laws of damaging speech. Maimonides states that the essence of the prohibition does not depend at all on the fact that the speech is damaging; spreading idle gossip is in itself a transgression of the verse, "Don't go about as a talebearer among your people". Here is the quotation from Maimonides' Code:

One who gossips about [literally, "spies on"] his neighbor transgresses a negative commandment, as it is said, "Don't go about as a talebearer among your people". . . Who is a gossip? One who bears rumors and goes from this one to that saying, "This is what so-and-so said; this is what I heard about so-and-so", even if it is true, it ruins the world. (1)

The second link is equally simple to demonstrate. Again, there are two distinct sources. One source is that listening to gossip is forbidden just as saying it is. In the same chapter Maimonides writes regarding gossips that "it is forbidden to dwell near them, so much the more to sit with them and hear their words". But this is mainly referring to passive listening. Rabbi Yaakov Chagiz explains that when we actively seek out private information, such as by reading a private letter, this is actually considered to be like telling it. What difference does it make, he asks, if I reveal private information to someone else or if I reveal it to myself? (2)

Let us now draw the final link. It is true that a special exception is made for information that is already widely known. The Talmud tells us: "Anything that is said before three people is spared from being considered forbidden speech. Why? Your friend has a friend, and your friend's friend has [yet another] friend." (3) At a certain stage, it becomes assumed that a fact is common knowledge, and then there is no culpability to mention it.

However, the rabbis point out two critical reservations to this exemption:

Maimonides writes in our same chapter:

If the things were said before three, [we may assume that] the rumor has already been heard and is known, and if one of those three tells it another time it is not considered lashon hara (damaging speech); this, on the condition that he does not actually intend to spread the rumor and disclose it further.

The conditions are that it is one of the three who retells it (that is, it is still within the original circle of people familiar with the story), and that there is no intention to spread the story. Both conditions are generally violated in sophisticated web-searches. The fact that some information (marriage, divorce, arrests, etc.) is available to someone who schlepps out to a remote country courthouse certainly does not make it common knowledge. If someone then goes out and digitizes those records it's still not common knowledge, partially because it may be improper in the first place to make them so freely available and secondly because the information is still not available without special knowledge and effort (and sometimes without spending money).

So the fact that information is available to people who have the knowledge to seek it out and is permissible for people who have a genuine need to know (if there is a court case then finding out about previous marriages and divorces could be critically important) doesn't make it "common knowledge". The sin of the gossip is precisely taking information which is known to a few and available for the asking to those with a special need, and disseminating it to the masses.

So I reaffirm my previous conclusion: Safeguards on web searches could be better, but given the current state of availability and safeguards doing a simple web search on someone generally does not invade his or her privacy as privacy is construed by most people nowadays. But prying farther by using ingenuity and money to dig up hidden information, even information which is technically public available, is just a modern twist on the ancient pastime of pernicious gossip.

The Jewish Ethicist: Is the Seller Taking Advantage of Me?

The Jewish Ethicist - Predicting the Future
Vayelech 5783: Regret and Repent
Rabbi Sacks: Focus On the Important, Not the Urgent
Put Your Foot Down: Are Human Feet Poorly Designed?
Comments
MOST POPULAR IN Current Issues
Our privacy policy
Aish.com Is Looking for Great Writers