Intermarriage and the N.Y. Times 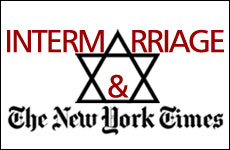 Is there ever any line that is crossed that calls for communal condemnation?

Readers of the New York Times must have been surprised to learn this past week that modern Orthodox Jews are some of the most extreme religious fanatics. That at least is the impression left by Harvard University Professor Noah Feldman in his Sunday Magazine article "Orthodox Paradox," as he recounts in heart wrenching detail his enforced estrangement from the Jewish community.

Feldman, as he tells us, is a graduate of Maimonides school in Brookline, Massachusetts. Educated in what he refers to as "at once a Lithuanian yeshiva and a New England prep school," the very institution founded by Rabbi Joseph Soloveitchik in accord with his philosophy of synthesis between secular and Torah studies, Feldman was a fully committed practicing Jew for a number of years after his graduation. Blessed with brilliant academic achievements, he was warmly embraced as a magnificent role model both by his alma mater and the many Jewish organizations with which he was affiliated.

All that changed however when he made one life-altering decision. He chose to marry a non-Jew. With his learned background, he knew that according to Jewish law his children would not be considered Jewish unless his partner converted to Judaism. With full knowledge of these consequences, he nevertheless chose to marry out of the faith rather than perpetuate the Jewish people. And to what he claims is his great surprise and dismay, he no longer found full acceptance by the institutions that educated him.

Feldman shares with the Times readers the -- for him -- shocking facts that the alumni newspaper refused to offer him wishes of Mazal Tov upon his marriage or the birth of his children. Indeed, an alumni photograph went so far as to excise him and his girlfriend from a group picture -- an act that he believes is a personal slight beyond comprehension. In his brief about the horrors of Orthodox separatism, he leads us ultimately to the examples of Yigal Amir, assassin of Prime Minister Rabin, and Baruch Goldstein of Purim massacre notoriety.

At first glance, it is difficult for anyone with compassion not to empathize with Feldman's pain. Those of us who feel strongly about bringing Jews closer to their heritage by showing them even greater love must hesitate as we consider the wisdom of educators who shun rather than accept, no matter what the transgression.

Yet it is precisely a tragic event such as this that must force us to confront the question: Is there ever any line that is crossed that calls for communal condemnation? Does tolerance have its limits? Even if as Jews we strongly believe in the potential for every Jew, no matter how far removed, to become proactively engaged in Judaism, is there not a time that we have to make clear we abhor the act although we still love the sinner?

Responding with no condemnation, the Jewish world would in effect be condoning. If we cherish Jewish survival, that is an impossible alternative.

In a society such as ours which worships at the shrine of "Do your own thing" and willingly accepts any kind of behavior as but another form of permissible personal expression, Feldman's hurt resonates with all too many people. Why be so vindictive? is the knee-jerk response to his marriage out of the faith. Allow me to disagree. Does someone who flaunts behavior that strikes at our most precious beliefs -- and does so not out of ignorance but with full knowledge of the consequences -- continue to deserve communal embrace?

Responding with no condemnation, the Jewish world would in effect be condoning. If we cherish Jewish survival, in this instance, that is an impossible alternative.

How far can one ignore that his actions have necessary consequences. Listen to Feldman's own words: "Despite my intimate understanding of the mind-set that requires such careful attention to who is in and who is out, I am still somehow taken by surprise each time I am confronted with my old school's inability to treat me like any other graduate...I have not felt myself to have rejected my upbringing, even when some others imagine me to have done so by virtue of my marriage... If this is dissonance, it is at least dissonance that the modern Orthodox should be able to understand: the desire to inhabit multiple worlds simultaneously and to defy contradiction with coexistence."

His words bring to mind Solomon Schechter's pithy response to a plea for religious moderation: "It reminds me of the American juror who said 'I am willing to give up some, and if necessary all, of the Constitution to preserve the remainder.' "

Refusing to the draw the line anywhere is not an attempt to grapple with contradictions within religion, it is choosing to bring about an end to Jewish identity for his children. Does this not constitute a rejection of his upbringing? Is it really so surprising why his classmates and rabbis refuse to rejoice with him by offering wishes of Mazal Tov?

Fascinatingly enough, Feldman admits that not one of his former rabbis would refuse to shake his hands even now. Personally he is not a pariah. For those who wonder why his former school no longer showers him with recognition, the answer ought to be obvious. As an individual, we must still offer him love and convey the hope that some day he will come back into the fold. But as a community, there has to be some expression of antipathy for an action that, if collectively followed, would spell the end of the Jewish people.

The Times article has sparked heated discussion and debate. For modern Orthodox Jews, accustomed to being criticized for excessive liberalism and outreach to those not ready for full Torah commitment, it must be strange to suddenly find themselves accused of narrow-mindedness and fanatic adherence to their faith. Perhaps that can serve as a wonderful reminder that even liberals have to have limits.

Perhaps by demonstrating how much we care about our survival, we will express to Noah Feldman and many other Jews the need to rethink the possibility that Judaism bears a powerful message worth preserving.