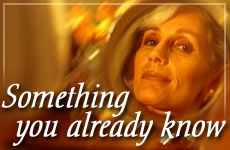 The world is divided into two kinds of people: those who fear getting older and those who do not.

The world is divided into two kinds of people: the kind and the unkind.

When time was a flower blossoming slowly in the palm of my hand, how was I – the baby in the family – to know it wouldn't take a hundred years to reach middle age? With each step I take into deeper water, my definition of the term middle age has magically continued to shift, like an outgoing tide, farther and farther off toward the horizon.

For decades, I've been trying to keep each passing present momentary fragment under lock and key, to preserve it, to save myself from being swept away in time's maddeningly unstoppable tidal wave.

This year, our first time ever, my husband and I experienced the incredible satisfaction of introducing two people who subsequently got married. "You've hit the bulls-eye!"
the man exulted.

An unexpected side effect of our success (in spite of their speedy divorce) is that we've now gotten three calls asking for 'the shadchanim, (matchmakers), Mr. and Mrs. Shapiro."
I got the third call this morning.

"Hello,"
she said, with what sounded like a Dutch accent."My name is H–, and I was given your name by C– . I converted to Judaism seventeen years ago, during the final stages of my husband's illness. The conversion was an outgrowth of that absolute loss, and certain insights which it fostered, which...well, I don't need to go into it. Two of our children are married and working happily, and the third is going through what he has to go through. I am fifty-one. I look quite a bit younger than that, however. Not that I've tried."

"To look younger than I am. I respect age too much to do that."

"Just that. I respect age."

"Oh, certainly. I would not trade what I have learned, nor the understanding that I have acquired, for a face without wrinkles or a firm this or smooth that. Age is an achievement. A crown."

I murmured an encouraging noise. I wanted her to go on.

"Because to get older,"
she said, "is to become part of the ultimate purpose. There is a purpose to all events, after all, you know. Each detail of our lives leads us toward a more complete flowering. To have the opportunity to grow older is a great – a great thing. It is a wonderful thing to learn through our individual trials, to become more wise, to open our eyes more and more to the greater reality. For there is a greater reality. There is a greater purpose than our individual trials, yet it is through these small personal trials that we become a part of God's goal in having created human beings in this world. And whether we know it or not, that is what each of us wants: to take part in this process. If we do not see that we are moving along towards God, which is what we really want, then all we see is that we are losing the self we possessed during earlier stages – which we usually possess without even noticing it at the time. We are so afraid of the dying! The new wrinkle. All we see is: ‘Look at this new gray hair! That gray hair!' That is a horrible trivialization of our role in the world."
She paused. "Is this something that's on your mind, Mrs. Shapiro?"

"Then forgive me for going on like this. Well, if any of it strikes a chord in you, I'm just saying something you already know."

While brushing my teeth this morning, I beheld in the mirror, lo and behold, a new wrinkle, previously undetected, and reserved a hall for that very night.

It was a gala celebration, standing room only. At seven o'clock sharp, the wrinkle stepped up to the podium. To the blasting of trombones and clashing of cymbals, the wrinkle, in its tux, proclaimed: "My human host,"
(I blushed) – "is utterly thrilled to be progressing toward her ultimate goal! She's on the universal journey whose every second swells with infinite meaning! Whose course is unpredictable! Whose unknown destination will be eventually shared by everyone in this room tonight!"

I sensed a wave of impatience rippling through the audience.

'If that's something you already know, I mention it only because I thought maybe somebody out there would know of someone for my friend over here."
I asked H– if she'd be so kind as to come up on stage. "In the middle of her journey, this individual is seeking a partner who – "
I rustled through my purse for the card. "Oh, here it is. A nice Jewish fellow unfazed by the unknown, someone who will neither be terrorized by light years of despair, nor unduly discouraged by black holes of emptiness along the path. Should preferably know that darkness is just the flip side of light and that the bitter is sweet. Non-smokers only need apply."
(H – gave a grateful nod in my direction.) "Have-nots welcome if they consider themselves haves. She's seeking a giver and a taker, but please, no IBM Compatibles. Someone in perpetual awe of the Creation, and supremely thankful, at this very moment, to be alive."

An excerpt from the forthcoming "A Gift Passed Along"
, published by Artscroll.

Eight Days with Our Baby

Alzheimer’s and the Here and Now
Extras In Our Own Epic
Evolution 2.0: The Coming Darwinian Revolution
Chukat 5782: Let’s Play the Blame Game!
Comments
MOST POPULAR IN Family
Our privacy policy