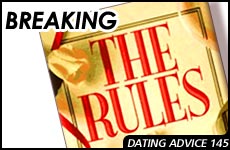 Following a book's advice on dating games doesn't seem to be working.

I am 21 years old and from London. On my birthday, my friend gave me a book about finding Mr. Right called The Rules. It made me realize that if I want someone to respect me, I have to play "hard to get."

I've been on three dates in the last three months, and thought I was on a lucky roll. On all three dates, I tried to be mystical and not give away too much about myself. After the date, I made sure that I never called them. Unfortunately, they never called me, either.

What am I doing wrong? Is it my personality? Should I not play by these rules? Will I ever find anyone who is right for me?

Please help, as I thought I was doing everything right for a change!

We're glad it took you only three dates to realize that playing games doesn't work. Books like The Rules sell because they use an attention-grabbing premise that sounds new or different, or offer the promise of a quick fix to a serious problem. This has the same long-term value as a grapefruit or cabbage soup diet has to someone looking to lose weight. It sounds interesting and promising, but isn't effective in the long run.

For many generations, people assumed that they would meet a nice man or woman who wanted similar things out of life as they did, that they'd get to know each other over a period of dating, and if they fell in love they would get married. They defined "love" as affection and caring, and expected that marriage would involve growing together and sharing life's joys and difficulties. They looked for something much less exciting than what the media has conditioned our generation to expect, but they certainly didn't suffer for it. Actually, we both followed the same process and we're glad we did.

Unfortunately today, a large percentage of singles have abandoned the tried and true method, and are instead hoping to find the Right One by playing games, becoming entrenched in a group social structure that stifles an independent social life, expecting a mythological instantaneous emotional connection, or looking for a great "dating partner" instead of someone who will become a great "life partner."

Society has conditioned us to expect to be instantly attracted to a dating partner -- to sense a strong physical attraction, to experience a "click" of personalities right away, or to feel that we are "soul mates" who have known each other all our lives. Movies, novels, television and pop-40 songs have done a great job of selling us these fantasies -- and in doing so have made a substantial contribution to the epidemic numbers of unmarried men and women who are futilely trying to find marriage partners (not to mention the millions of those divorced).

There is no quick fix. Many times, even someone seriously focused on finding the right person, and who follows what we call the pattern of traditional courtship, must wait a few years to find the Right One. It is easy to become discouraged, anxious, and doubtful during this process, and a new approach that promises success sounds very appealing to someone who feels as if s/he is in a dating rut. But, if you look carefully at books like The Rules, you can see the fallacy behind its premise.

The Rules tells you that dating is a game, and that if you want to catch a man you have to stop being yourself and adopt a persona that is mysterious and beguiling. It's bad enough to use this persona to snare an unsuspecting guy, but once you've got him, The Rules tells you to keep playing the game -- forever! Do you really want to develop a relationship with someone who doesn't appreciate you for who you really are? Do you really want to base a marriage on this premise?

Furthermore, The Rules doesn't offer any guidance on how to develop an emotionally intimate connection. In our view, emotional intimacy is a vital ingredient in marriage, and husband and wife must work on nurturing that throughout their married lives. If you aren't "yourself" with the man you date, how can you develop true emotional intimacy… and how do you sustain something that doesn't exist?!

Most of the men we know don't like playing games. Yes, playing hard-to-get might be intriguing for a while, but a man looking to share his life generally wants genuine emotional honesty. And you don't have that when you play games.

What's the alternative to The Rules? We recommend that you start with a clear idea of your values and the direction you'd like your life to take. Know yourself -- what type of a person you are, and what positive qualities best define you as a human being. In addition, think about the qualities you would like your future husband to possess, and narrow your list down to the four most important ones. Look for a man who is moving in the same general direction as you, and who has the personal qualities you feel are important.

When you go on your first date, think of it as an ice-breaker that is simply a prelude to a second date. Don't have any expectations other than meeting a nice person that may be compatible. If you're like most, you'll simply think that their date is a "nice person." In such a case, even if the date was "just okay," we encourage you to go out again. Most people don't begin to connect until the second or third date, when you'll feel a little more comfortable with each other, have a little more to talk about, start to understand your date's style of communication and sense of humor, and develop some shared experiences to build upon.

Of course, there are times when it isn't a good idea to go out again -- e.g., if there is something about your date you strongly dislike, if he acts inappropriately or offensively, or if the two of you have very different value systems and are clearly heading in different directions.

After the second date, if you decide to continue to go out, use the next several dates to gradually open up and get to know each other. Hopefully, the physical attraction and emotional connection will take root and grow. In a promising courtship, a man and a woman also develop mutual respect, admiration for character qualities, acceptance of each other's imperfections, and, of course, affection for each other.

We'd like to recommend some effective books to help you clarify what you're looking for, and engage in a dating process that leads to marriage: Talking Tachlis and In The Beginning (by Rosie & Sherry), Head Versus Heart (by Gila Manolson), Getting the Love You Want (by Harville Hendrix), and of course Men Are From Mars, Women Are From Venus (by John Gray).

The most important ingredient is to be honest with yourself, follow these suggestions, and understand that it may take a bit of time before you meet the man who is right for you. But with God's help you will achieve your goal of a happy and enduring marriage.

Dating Maze #217 - Bickering In-Laws
Olivia Newton John’s Grandfather was a Nobel-Prize Winning Jewish Physicist
Don’t Believe in Other Gods Versus God is One
Seeing Without Eyes
Comments
MOST POPULAR IN Dating
Our privacy policy
Aish.com Is Looking for Great Writers