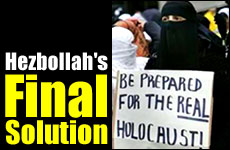 The Iran-Hezbollah axis is the greatest threat to world peace, to Jewish survival, to Western values, and to civilization.

The ness of the Holocaust was not the Nazi's determination to kill
the Jews of Germany and even of neighboring Poland. Other genocides,
such as those by the Cambodians and the Turks, sought to rid particular
areas of so called undesirables by killing them. The utter ness of
the Holocaust was the Nazi plan to "ingather" all the Jews of the world
to the death camp and end the Jewish "race" forever. It almost
succeeded. The Nazis ingathered tens of thousands of Jews (including
babies, women, the
elderly) from far flung corners of the world--from the Island of Rhodes
from Salonika and from other obscure locations -- in order to gas them
at Auschwitz and at other death camps.

The official leader of the Palestinian Muslims, Haj Amin al-Husseini,
the grand mufti of Jerusalem, collaborated in the Nazi genocide,
declaring that he sought to "solve the problems of the Jewish element in
Palestine and other Arab countries" by employing "the same method" being
used "in the Axis countries". Husseini, who spent the war years in
Berlin and was later declared a Nazi war criminal at Nuremberg, wrote
the following in his memoirs:

Our fundamental condition for cooperating with Germany was a free hand
to eradicate every last Jew from Palestine and the Arab world. I asked
Hitler for an explicit undertaking to allow us to solve the Jewish
problem in a manner befitting our national and racial aspirations and
according to the scientific methods innovated by Germany in the handling
of its Jews. The answer I got was: "The Jews are yours."

Husseini planned a death camp for Jews modeled on Auschwitz, to be
located in Nablus. He broadcast on Nazi Radio, calling for genocide
against all the world's Jews: "kill the Jews wherever you find
them--this pleases God, history, and religion." Professor Edward Said
has acknowledged that this Nazi collaborator and genocidal anti-Semite
"represented the Palestinian Arab consensus" and was "the voice of the
Palestinian people." Yasser Arafat referred to Husseini as "our hero."

Never before or since in world history has a tyrannical regime sought to
murder all of the members of a particular racial, religious, ethnic or
cultural group, regardless of where they live--not until now.
Hezbollah's aim is not to "end the occupation of Palestine," or even to
"liberate all of Palestine." Its goal is to kill the world's Jews.
Listen to the words of its leader Sheikh Hassan Nasrallah: "If Jews all
gather in Israel, it will save us the trouble of going after them
worldwide." (NY Times, May 23, 2004, p. 15, section 2, column 1.)
Nasrallah is one of the most admired men in the Muslim and Arab world
today. Hitler made similar threats in Mein Kampf but they were largely
ignored. Nasrallah has a reputation for keeping his promises.

His genocidal goals--to kill all Jews--were proven by two recent
statements. He has warned the Arabs and Muslims to leave Haifa so that
his rockets can kill only Jews. And he apologized for causing the deaths
of three Israeli-Arabs in Nazareth, when a Katuysha struck that
religiously mixed Israeli city. Hezbollah also worked hand-in-hand with
Argentine neo-Nazis to blow up a Jewish community center, murdering
dozens of Jews.

Nasrallah is a modern day Hitler, who currently lacks the capacity to
carry out his genocide. But he is an ally of Iran, which will soon have
the capacity to kill Israel's five million Jews. Listen to what the
former President of Iran has said about how Iran would use its nuclear
weapons:

Hashemi Rafsanjani, the former president of Iran, has threatened Israel
with nuclear destruction, boasting that an attack would kill as many as
five million Jews. Rafsanjani estimated that even if Israel retaliated
by dropping its own nuclear bombs, Iran would probably lose only fifteen
million people, which he said would be a small "sacrifice" from among
the billion Muslims in the world.

Now listen to the current President of Iran, Mahmoud Ahmadinejad, who
denies the Nazi Holocaust, but calls for a modern Holocaust that would
"wipe Israel off the map."

Despite these anti-Semitic and genocidal threats, some of the hard left
admire Nasrallah and his bigoted organization, as well as Iran and its
anti-Semitic president. Others do not seem to take his threats
seriously.

For example, the notorious Jewish anti-Semite Norman Finkelstein has
said, "looking back my chief regret is that I wasn't even more forceful
in publicly defending Hezbollah against terrorist intimidation and
attack."

Finkelstein's hatred of Jews runs so deep that he has actually implied
that his own mother, who survived the Nazi Holocaust, may have
collaborated with the Nazis. If so collaboration with evil seems to run
in the family, because Finkelstein has clearly become a collaborator
with Hezbollah anti-Semitism and Nazism. Finkelstein's website is filled
with Hezbollah promotion, including breathless reprints of Nasrallah
speeches.
Noam Chomsky, who works closely with Finkelstein, has said of
Finkelstein that he is "a person who can speak with more authority and
insight on these topics [Israel and anti-Semitism] than anyone I can
think of."

The Iran-Hezbollah axis is the greatest threat to world peace, to Jewish
survival, to Western values, and to civilization. Those like
Finkelstein, who support Hezbollah, and even those who refuse to fight
against this evil, are on the wrong side of history. They are
collaborators with Islamofascists -- today's version of Nazism. 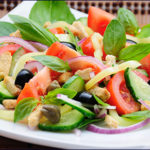