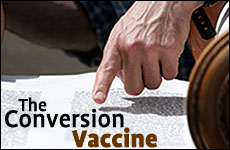 The best defense to the ambitious "Jews for Jesus" missionary campaign.

This July, like so many before it, New York City's oppressive summer weather is being accompanied by another perennially irritating mass of hot air. "Jews for Jesus" -- this year along with "The Chosen People Ministries" and the "Christian Jew Foundation Ministries" -- are out in force, trying to convince Jews that relinquishing their faith in favor of a contrary belief system (one, even, in whose name untold numbers of Jews over the centuries were made to suffer and die) is somehow not an abandonment of Judaism but its "fulfillment."

Boosted by a budget of millions, Jews for Jesus alone has mailed material to 400,000 Jewish homes in the area, and Yiddish DVDs to 80,000 Orthodox ones. It is also running radio spots (complete with a klezmer "Hava Nagila" in the background) and placing ads in subways and newspapers.

Although in the past the missionary organization focused on Manhattan, this year it is aiming at all five New York City boroughs and surrounding counties, with special campaigns aimed at Russian-speaking Jews and Israeli expatriates.

Many Orthodox recipients of the Yiddish DVDs, seeing their title and packaging, assumed that they contained inspirational Jewish material. When they popped the discs into their computers, though, their anticipation turned to disgust as they realized the deception (call it Ruse for Jesus). After filing the unwelcome gift in appropriate receptacles, many then telephoned Jewish organizations like Agudath Israel of America, and Jewish newspapers, to warn others about the high-tech wolf in sheep's clothing.

Even the group's name misleads. There must surely be some Jews within its ranks, but interviewing a random sampling of its clean-cut, fixed-smile minions quickly reveals that the organization is composed less of Jews who have embraced the Christian savior than of born and bred evangelical Christians trying to foist their faith on Jews.

For the most part, it is Christians whom they attract, too. As a recent New York Times article noted, most of those "who pray with Jews for Jesus missionaries... are, in fact, non-Jews, according to the organization's statistics." Still and all, for those of us Jews who consider every Jewish soul infinitely precious, the missionaries' pushy pushing of their "good news" among our brethren is bad news enough.

Familiarity with Judaism's beliefs and Jewish history is a most effective inoculation against conversion-itis.

It is, of course, an exceedingly rare product of a traditional Jewish education who might fall prey to Christian proselytizing. Familiarity with Judaism's beliefs and Jewish history is a most effective inoculation against conversion-itis. Unfortunately, though, there is no lack of Jews with sorely limited knowledge of their own faith. To the missionaries, they are their keys to heaven; to us Jews, they are our brothers and sisters, whose own road to heaven lies in a connection to their people and their ancestral faith.

And so the current missionary onslaught should serve as yet another timely and trenchant reminder that we Jews, all of us, need to do more to empower Jewish education -- and the Jewisher the better.

In the wake of the 1990 National Jewish Population Survey's alarming statistics, there followed an increased awareness within the larger Jewish community of the importance, and dire underfunding, of Jewish day schools, high schools and yeshivos. In more recent years, though, according to Dr. Marvin Schick, who is intimately familiar with the landscape of American Jewish education, things have changed, and not for the better.

Indeed, while there have been laudable private initiatives and some communal restructuring of priorities, few if any Jewish federations place support of day schools high on their list of concerns. An informal survey of Jewish federations in several large American cities yields average allocations of 2% to 7% of federation funds for such schools, with most contributions, including in New York, well toward the lower end.

Is it unreasonable to expect more from our Jewish philanthropic structures?

True enough, most Jewish schools are Orthodox, and most contributors to Jewish federations are not. But is that reason to turn a blind eye -- or, at best, a severely myopic one -- to the need for, and needs of, schools that happily accept, nurture and educate all local Jewish children, regardless of their families' level of observance?

Particularly important (and particularly needy) are Jewish "immigrant schools," those that provide for the education of children from families who have come to our shores from former Soviet Union lands and elsewhere. Such families are considered high priority by missionaries. Should they not be of equally high priority to Jewish charitable institutions?

If the broader Jewish community truly wants to fight the missionary scourge, it needs to ponder hard the fact that, in the realm of spiritual health no less than physical, an ounce of prevention is worth a pound -- here, a ton -- of cure.

From the mouths of missionaries.

Nas Daily: How One Man Built the Fastest Ambulance
Why My Iranian Mother Didn’t Want Me to Become a Religious Fanatic
The Jewish History of Prague
Why the Sexual Revolution was Bad for Women
Comments
MOST POPULAR IN Israel
Our privacy policy
Aish.com Is Looking for Great Writers