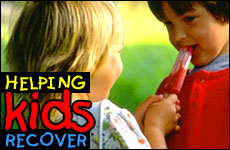 You never return to who you were after terror rattles your world; you become somebody else.

An art therapist is in my office when she hears the title of this article. They don't recover, do they? she asks.

Recover is not the right word. Because you don't return to who you were; you become somebody else. The loss stays with you forever -- and as a child, you keep confronting it with each year you mature. You have to keep integrating the loss, and what it means to you.

My daughter was 11 when her 13 year old brother Koby was killed by terrorists. She started a new school a year later, and didn't tell the class about Koby until last week -- 2 years later. My daughter is now 13 herself.

The teacher kept encouraging her to share with the class. But Eliana didn't want to. The teacher went so far as to write on Eliana's report card that she knew Eliana had 'problems' and that she understood that her grades were low as a result.

Eliana was mortified. She felt that her privacy had been invaded. But an expert in child psychology who wrote a book on children and bereavement told me that she thought the teacher's comments were appropriate.

The truth is there is no easy answer with children or with people -- what works for one child may not work for another. But there are certain things I think that do create unhealthy situations.

One of them is the insistence on strength. When I recently spoke to a group of high school principals, I told them I didn't understand what was so great about being strong. In Israel there is such an emphasis on being strong. Crying for me is strong -- sharing the truth of feelings. The principals nodded and looked like they understood. At the end of the session the superintendent of the entire district thanked me. "Be strong," she said.

We have such a need to make sure the other is strong. What do people fear? I think they need others to be strong so that they don't have to confront the enormity of death, the staggering weight of loss, and the fact that all of us will die. Of course in Israel, people do need to go on because the society needs to survive. We would always be grieving. But expressing feelings doesn't mean that you don't go on. In fact, it may mean that you go on in better emotional health than if you are "strong."

"What do you like about the camp?" Eliana answered: "We make jokes about the kids who died."

Eliana told her class about her brother and her family. And then she told them about the camp we run and that she attends, Camp Koby for children who have lost loved ones to terror. Her teacher asked: "And what do you like about the camp?" Eliana answered: "We make jokes about the kids who died."

The girls in her class kids gasped. They didn't understand.

But her teacher said: "And that makes you feel better, right?"

Kids love the fun at our camp. But they also love the feeling of being normal there. At camp they can joke and say: If he was alive I would kill my brother, I'm so mad at him for dying." They can express feelings of anger, pain, and annoyance. If they want to talk they can. Nobody is telling them to be strong. By joking, the kids take ownership of their stories, shaping it into a narrative that they can carry and share. They retell their stories in terms they can deal with. But you can't tell your story if your objective is to be strong. You spend your time guarding it,

The Hebrew word for recovery is related to the word to dream. For real recovery, you need to have a dream. You can't give a kid a dream. They have to find their own -- and then you can encourage them. By seeing people around them who have survived loss not by being strong, but by changing and growing and being more than they were, that gives kids the idea that they too can emerge from heartbreak with the power to dream -- and to work toward their dreams.