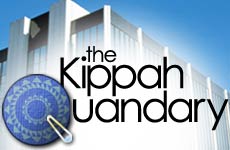 My landmark dilemma: Do I wear a kippah to the job interview or not?

I have a confession: I wear a kippah. And not just in synagogue either. All the time. Even in social situations. I didn't used to. In fact, for the first 36 years of my life I only wore one in synagogue. And even that was a rarity.

The phenomenon of the switch from "no kippah" to "everyday kippah" is most indelibly recorded by the reactions you get from friends, family and co-workers. These reactions range from "Why are you wearing that? Is it some kind of Jewish holiday again?" to "He's such a fanatic!" to "He wears it to hide his bald spot!" (I only wish I had thought of that when my bald spot first appeared 15 years ago!)

But my favorite and most subtle reaction came from a colleague whose eyes would dart back and forth between my kippah and me about 50 times during a 5-minute conversation.

A landmark dilemma of newfound "kippahedness" comes when confronting your first new work situation wearing the "traditional Hebraic skullcap," as one co-worker deemed it. This involves meeting with someone outside your current company and thus, outside of the group who saw your slow transition from secular guy to religious guy, and who asked all the questions about your new practices and actually seemed interested in the answers. Now you are venturing beyond the safe zone, out into the final frontier.

To kippah or not to kippah? That is the question.

For me, this "first contact" came while interviewing for a new job. What made it even more difficult was that it was a job I actually wanted! In other words, there was a lot at stake professionally. So, now I had to make a choice. One does not have to wear a kippah to work if it will prejudice his position in a negative way. So, I had an "out" if I wanted one. But should I take the out?

To kippah or not to kippah? That was the question.

Whenever I have these deep, moral questions, I always consult my wife. She's not just smarter and cuter than I am, she's a whole lot wiser. As usual, she had a brilliantly insightful response. "Well," she said, "if you're afraid that your new prospective boss may not like Jews or religious people in general, it's better to find out in the interview stage, rather than after you're working for them."

And with that, the decision was made. I would kippah.

I arrived at the interview a few minutes early and went to the men's room to check my wardrobe. I looked pretty much the same as I had in all my other job interviews. Except for the circular addition atop my head. My kippah was clean and tasteful (I wouldn't be caught in public without a tasteful kippah!), but it was also a statement. A BIG statement. So standing there in the restroom, I hesitated for a moment and thought, "You can still take it off."

But then I realized that not wearing my kippah would be an even bigger statement. A statement about denial of who I am. A Jew. A religious Jew. So for me, going in without a kippah would be a statement that I am less-than-fully committed to those ideas around which I base my life. So, in I went – tasteful kippah and all.

The man who greeted me smiled and shook my hand. No eyes darting from my kippah to me, no jaw hanging down to the ground like in the cartoons. Just a nice "hello."

Early in the interview, he asked me, "What are you passionate about?"

"In business or in life in general?" I asked.

"Life in general," he replied.

I thought for a split second. Should I be really honest? Should I tell him what truly animates and motivates me in life? Or should I just give him the stock corporate answer that "a job well done and sacrifice for the company is what makes me tick"?

I opted for the former. I figured what the heck, he's already seen the kippah. Might as well be honest. Just go for it.

"My passions are God, family, community, and work. In that order."

I tried to soften the blow. "Probably not what a manager wants to hear! But don't misunderstand me. I work hard and take my job seriously. But it's a matter of priorities."

I looked for his response; any sign of shock or noticeable disappointment. I saw none. He simply smiled and continued the interview.

What is your passion in life?

We really clicked and the rest of the interview went great. But I couldn't help wondering what he thought of my answer to that first question. At the end of the interview, he asked me if I had any questions for him.

"Just one," I said. "What are you passionate about in life?"

(When I later told my friends that I asked him that, they were as shocked as if I had asked him whether he wore boxers or briefs.)

"Well," he said smiling. "It's funny. As I listened to you answering that question, I felt as if I was hearing myself answer it."

I got the job shortly thereafter.

In the end, going to the interview with a kippah, and answering the questions in an honest-but-not-politically-correct way, was not a heroic act. My in-laws who survived the Nazi concentration camps, my father who flew over 50 combat missions during World War Two – they are the true heroes.

Still, what I did made a bold statement. I took a stand for something I believe in. It became clear to me that if I am only a religious Jew in private, then what, if anything, am I really? If I never take a stand on anything, then I really stand for nothing. Indeed, maybe because my kippah and my words evidenced that I did stand for something, I stood out from the other candidates and got the job.

The Jewish Ethicist - Predatory Lending
Where Do the Laws of Nature Come From?
Saadiah Gaon, Rashi and Maimonides: How Three Rabbis Revolutionized Judaism
King Sennacherib and the Siege of Lachish
Comments