Pick Up the Phone 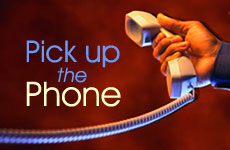 I hadn't thought much of Michael in the last three years. Until a few weeks ago when I heard that he had died of a sudden heart attack.

By the end of 1997 I was down on my luck. Earlier in the year, I had come down with a bad case of dot.com fever and I was determined to establish The Next Big Thing in hi-tech.

As I made the rounds from one venture capital firm to another, though, I was met with the same response. The words varied but the direction was always the same.

By the time I was given the name of a private investor named Michael Karash, I had been out of work close to a year and what little savings Jody and I had left had all but dried up.

My first meeting with Michael was in his Tel Aviv office. As soon as I walked in the door, I knew something was different. First of all, he had actually read my business plan and had marked it up with all manner of comments.

Michael asked me several questions, mainly about my character. There was an immediate rapport, even a playfulness one wouldn't expect so soon in a relationship.

"You know what 'Karish' (the Hebrew pronunciation of his name) means don't you?" he asked.

"It means shark," he said and chuckled while flipping through my documents one last time. Then he turned to me and said point blank: "Okay, I'll give you $150,000 today. But I take 50% of the company."

And then with a sly grin that I would come to know almost as well as my own children's, he added, "You and I will be partners."

I told him I'd think about it, but I already knew. It was now or never and I was far too close to the edge of never. Michael was what they call in the industry an angel. In more ways than one, I thought as I walked back to my car.

Over the course of the next two and a half years, Michael and I became like family. We were the parents presiding over our growing family. Our little company opened offices in Jerusalem, New York and San Francisco, hired -- and fired -- some 25 employees, and in the end raised over $3 million dollars.

It was a glorious ride. We flew the redeye in business class to give presentations and meet with strategic partners in Denver, Minneapolis, Philadelphia, Dallas and countless other locations I no longer can or care to recall. We negotiated in fancy restaurants and slept in $300 a night hotels.

As the company began to disintegrate along with the rest of the hi-tech industry, it was money that tore us apart.

Ultimately, though, as the company began to disintegrate along with the rest of the hi-tech industry, it was money that tore us apart. Just like family. Arguments over final salaries and divvying up the remaining assets became painfully contentious.

When the company finally closed its doors, we fell out of touch.

I hadn't heard nor thought much of Michael in the last three years. Until a few weeks ago when I received an email saying that Michael had died of a sudden heart attack. By the time the message found its way to me, the funeral had already passed.

The next day, I had a meeting with Ami, my accountant. We'd become embroiled in a seemingly intractable argument over expectations and services rendered. As we sat together, trying to come to an amicable agreement that was looking increasingly remote, I felt small tears welling up in my eyes.

This was not a good negotiating tactic.

But suddenly everything looked different. Ami and I were family too. I had worked with him for even longer than I had with Michael. And just like Michael, he could drop dead at any moment.

As I struggled with my thoughts, I tried to figure out exactly why this was hitting me so hard. It wasn't like I wanted Michael back as my constant companion just like in the good old days. Nor were there burning words I still felt I needed to say. I had accepted that we had gone our separate ways and I was okay with that. Any anger had long since dissipated.

But it was inconceivable that, after everything we had been through, we no longer had a relationship. That I hadn't in the three years that had passed ever picked up the phone to say "hi."

And now I couldn't.

I turned to Ami and shared the news about Michael. I told him how I didn't want us to stumble down the same path. Then I made a financial offer which was more generous than I'd originally planned and I said I hoped he'd accept it.

He did. We shook hands and embraced.

And now I turn to you, dear reader. Pick up the phone and call someone you haven't spoken to in awhile. Not because you want to be best buddies. Not because you even want to get together for coffee.

But because you never know when you won't have the chance again.

Brian Blum writes the syndicated column "This Normal Life" at http://www.brianblum.com. Email him at brianblum@mail.com.