The Rabbi and Katrina 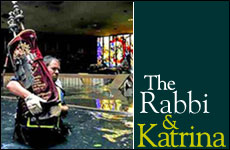 A deeper look at the storm's impact from a spiritual leader in New Orleans.

Life can change so quickly. On Sunday, one week before Katrina hit New Orleans, we had a wonderful event at our synagogue: a baby-naming for our new daughter. The entire community attended, and everyone's spirits were high. It was a beautiful way to start the week.

Sure, we'd heard that Katrina was coming, but ongoing projections were that the storm was going to cross over Florida and head north – nowhere near New Orleans.

So I was rather surprised when I arrived at shul that Shabbos morning, and one of my congregants said, "So, rabbi, are you planning to evacuate?" I hadn't yet heard, but the storm's path had switched dramatically and was headed straight at us.

I stayed up late Saturday night nailing boards over the windows of my house. I caught a few hours of sleep, and then awoke at 4 a.m. to check the weather forecast.

It was clear that we had to evacuate. We threw a few days worth of clothing into a bag, and at 5 a.m. loaded our family into the car and headed for Memphis, a six-hour drive away.

We received the worst news possible: the levee breeched.

On Monday we received the worst news possible: The levee wall of the 17th Street Canal had been breeched. Our neighborhood is protected by that levee, so every building – including our shul and our home – was submerged by 8-10 feet of water.

Bottom line: Most of the homes in our neighborhood have been totally destroyed. And we have been thrust into a state of doubt: Where will we live? Where will our children attend school? When will we return to home?

Everyone is being forced to start life anew.

This is the message of Rosh Hashanah. There is no guarantee from one moment to the next. Nothing is to be taken for granted. We need to make an accounting of who we are, what we really need, and what is our place in this world. Each moment, we are granted life afresh. Are we deserving? How will we utilize that life?

Those displaced by the storm are also faced with one of the most difficult questions of all: How will I support myself? Professionals – doctors, lawyers, businesspeople, teachers – have no office, no patients, no clients, no students. Everyone is looking for a job.

In this regard, the Jewish world has been incredible. Just about every Jewish community in America has contacted me offering homes and free day school tuition for any of my congregants who needs.

And therein lies one of the most painful and bittersweet aspects of this storm: Right now, many of us are being supported through charity. My garage here in Memphis is filled wall-to-wall with a truckload of clothing that was sent from the Jewish community of Queens, New York. I've had trouble distributing the clothing, because people are reluctant to take these clothes; the reminder of being homeless and living off of charity is too painful to bear.

This outpouring of charity is what family does for one another.

I recently spoke with a Jewish man in New York who is sending me a truckload of essential household needs. I expressed to him how difficult it is to be on the receiving end of charity. And this man, whom I've never met, replied: "We are all family, and this is what family does for one another."

So while the tragedy is overwhelming, it is also phenomenal in the positive sense of knowing that everyone cares. It is a great source of comfort to know that we have something to fall back on.

I recently received an anonymous letter, written on notebook paper. It said: "I know this isn't a lot of money, but it's what I saved from babysitting. I'm sending it to you, to let you know that I care." Enclosed was $10. Deep down, this girl feels that the Jews of New Orleans are her extended family.

In the aftermath of the storm, one of my congregants died. He didn't drown in the flooding. He was old and infirmed, and when they evacuated his nursing home, he died, most likely from the stress.

A volunteer from the search-and-rescue squad Zaka was going to New Orleans to retrieve the body, and we arranged that he would also go to the shul and take out the Torah scrolls. Our seven scrolls are all over 100 years old from pre-war Europe, and they are precious for both their financial and spiritual value.

To rescue the Torah scrolls, a helicopter flew near the synagogue, and dropped him on a boat.

About five miles from the synagogue, the Zaka volunteer had to stop because the neighborhood was so flooded. So with the help of various Jewish and governmental agencies, we arranged for a helicopter to fly him within a mile of the synagogue, and from there he boarded a small boat.

The synagogue was still swamped by four feet of water, and the Zaka volunteer had to wear rubber pants up to his waist. When he opened the holy ark, he discovered with great distress that all the scrolls were damaged beyond repair. He removed them and had them buried.

It's heartbreaking. New Orleans is a beautiful historic Jewish community, and for over 100 years, our synagogue has been an oasis of Torah on the Central Gulf Coast. We're known for offering the only regular daily minyan in a 350-mile radius.

Now that is gone.

Thanks to email, I have been able to stay in contact with Beth Israel's 175 member families.

For most of them, the future is uncertain. Many have moved into rental apartments – in Houston, Memphis, Atlanta and elsewhere – and are trying to return to some level of normalcy: finding a job, furnishing their home, putting their children in school.

Financially, this has been extremely difficult for people. Most have insurance, but it will be months before they can get back to New Orleans, assess the damage, meet with an insurance adjustor, and actually receive a check.

So my primary role right now as rabbi of the community is to assist people financially. I am collecting money and distributing it. That's what people need right now.

Before the storm, nearly all our congregants evacuated New Orleans, but there were a few who stayed. One middle-aged man, for example, refused to evacuate and in the midst of the storm, he called me and said, "Rabbi, it's bad here. Really, really bad."

He stayed behind, sleeping on a runway for two days without food.

I didn't hear from him for another week, and I wasn't sure if he'd survived. It turns out that the roof of his one-story house had blown off, and the floodwaters completely engulfed his home. He had a rowboat, and made his way to another rooftop where he was rescued by firefighters. They dropped him off in downtown New Orleans and he had to walk down Canal Street in waist-high water. From there he was taken to the airport where he slept on a runway for two days without food. He was then given a small of parcel of food to share with 20 other people.

This man was totally traumatized. Besides the destruction of the storm, and the death of all his pets, what shook him most was what he witnessed during the looting and chaos: other human beings completely degrading themselves. That alone is giving him nightmares.

After a few days, he was so distressed that he stole a bicycle and made his way to one of the suburbs. He has now rented a house and is putting the word out that other members of the congregation are welcome to stay there as necessary. And perhaps that is the most amazing aspect of his story: Amidst his own devastating loss, he is still focusing on ways that he can help others.

In life, nothing is random. God runs the world (quite precisely, in fact) and everything happens for a very good reason. The lesson of Katrina is that material things are totally unimportant. Because when they've been taken away – as in this case – you still have what really matters: your relationship with God and your family.

I can say that for me personally, since the storm, these relationships have only gotten better. Because I know that to be happy, I don't need much: just my family, God, and a little food and shelter.

This is the message of Sukkot, the culmination of the High Holiday season. On Sukkot, we leave the comfort and security of our homes, and spend one week in a flimsy shack, enjoying the company of family and friends, protected only by the Almighty's presence.

And it is precisely when we feel that vulnerability that we can ask life's deepest questions: Where am I going? What am I living for?

My congregants want to know: How do we take this experience and grow?

I am impressed and amazed that not one of my congregants has asked, "Why me?" Rather everyone accepts the righteousness of God's judgment. What they want to know is: What's next? How do I take this experience and use it to grow?

A number of my congregants have already decided to turn this into an opportunity – to move to a larger Jewish community where, for example, there are broader prospects for children's education and for Torah study.

On some level, people have a sense of relief and gratitude at being given the opportunity to ask these questions, and to ultimately understand themselves better. And I believe that as the initial shock subsides, that feeling will grow.

Where will we go from here?

I think about the many expulsions the Jewish people have endured over the centuries. And in one respect that gives me strength, for indeed, we are experts at rebuilding from the ashes.

Of course, this time there is a big difference: Historically when a Jewish community evacuates, they are never to return. In our case, there is a group who is strongly committed to going back to New Orleans to rebuild. And thank God, with the help of so many people who care, we have the resources, the energy, and the freedom to do so.

We are determined, as the saying goes, that this synagogue "will rise again."

Intermarriage and the N.Y. Times

When God Moved Out
Don’t Believe in Other Gods Versus God is One
Seeing Without Eyes
Why Shouldn’t We Eat Whatever We Want?
Comments
MOST POPULAR IN Israel
Our privacy policy
Aish.com Is Looking for Great Writers