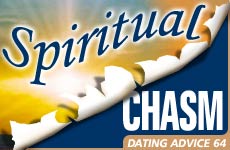 She's leaning toward traditional Jewish practice. He's an atheist. Is there hope for them together?

I have been dating a guy for six months. I am 40 and he is 42. I have never been married, he is divorced with no kids. Our dating has progressed swimmingly so far. We are both attracted and compatible in nearly every way. My family adores him and his family adores me.

We are both Jewish. However, Judaism is a lot more important to me than it is to him. He considers himself an atheist, although he was not raised that way. I am not observing much right now (don't keep Shabbat or kosher, though I do have a kosher kitchen), but I have in the past and hope to again in the future, especially when I have a family. Pretty early on, I knew that this could be an issue with us, but it just didn't seem so important back then.

Now that we've passed six months, I am pretty antsy about getting engaged. I'm feeling pressure from friends and family, but mostly from myself. We've started to talk about it. To my dismay he said that he does not want to raise our (potential) children as Jewish. There is no way I could ever agree to this!

Maybe we should plan not to have children, or just deal with this if and when it comes up. Or maybe we should part ways now, even though our courtship has been going great. Or maybe I should encourage him to read and take classes and try to keep an open mind.

A subject as important as the role that Judaism, or any religion, will play in family life is something that everyone contemplating marriage should discuss at length before their engagement. This is especially true in your case, when you and this man have very different outlooks and expectations. Delaying a difficult discussion only delays the inevitable, and often creates more problems than would occur if the issue were discussed and resolved at an earlier time. Similarly, if you continue to avoid this difficult topic and suppress your spirituality in order to avoid confrontation, you'll end up resentful and angry, and that will have a deleterious effect on your marriage and family life.

Raising children would also be very complicated and a source of strain on the relationship. How can one parent ask the kids not to eat cheeseburgers (for example) while the other parent is eating cheeseburgers?! I can just hear the less religious partner saying, "Leave them alone, dear. What's the difference, as long as they're enjoying themselves."

Children raised in homes where the parents do not share the same beliefs are going to be confused no matter how careful you are in raising them.

We recommend that the two of you have a frank discussion about your spiritual beliefs, and expectations of the role you would like Judaism to play in your home. You can talk about compromises each of you is willing to make, and try to come to a solution that satisfies you both. Working out an acceptable arrangement about such an important area of your lives, and about which you both have very different outlooks, will set the tone for how you both can successfully resolve future points of disagreement in your marriage.

We have seen these challenges work out in several couples who have different views on Judaism and religious observance, although there are many couples who are unable to reach an acceptable arrangement. Husbands and wives who succeed in synthesizing their diverse outlooks have two things in common:

When the two of you have this important discussion, please bear in mind the following: You can't go into a marriage hoping that you will be able to change anyone's basic beliefs. It isn't realistic for you, and it isn't fair to him. As much as we would like to see him change his attitude toward God and our faith, this isn't something you have the right to expect from him.

It is good, however, to ask him to keep an open mind. Successful marriages require partners who are open-minded, and who are capable of growing and changing. This man may change his outlook, as many people do over time, and your own spirituality may help influence him in this regard. However, these changes will have to come from the heart -- his heart.

It would certainly help to expose him to good Jewish role models. Rabbis can inspire, but your friend can never imagine fitting that model. Even more important role models are successful, intelligent laypeople -- who are also very Jewishly committed.

Also, give your friend a chance to see how your observance and learning directly increases your appreciation, respect and affection for him. In other words, do something really nice, and then when he thanks you, explain how you were inspired by having heard a certain Torah lesson. Once he sees the correlation, and how your Jewish involvement is "good for him" in a practical everyday sense, then he is bound to be more encouraging and interested himself.

If the man you're dating is willing to learn more about Judaism, we suggest that he consider reading an autobiography tracing one man's personal odyssey of alienation from Judaism to Jewish commitment: "From Central Park to Sinai: How I Found My Jewish Soul," by Yisrael Neuberger.

Another good way to jump-start the Jewish engine is by attending a Discovery seminar -- email discovery.usa@aish.com, or online at: http://www.discoveryproduction.com. Discovery has inspired many people to seek answers to their own spiritual questions by taking a closer look at their own Jewish faith. We hope it has a similar effect on your friend.

Dating Advice #103 - Getting a Late Start

Dating Advice #109 - The Missing Spark
Should I Break Up, Get Engaged or Keep Dating?
Time Is Your Precious Commodity
A Constant World in Flux
Comments
MOST POPULAR IN Dating
Our privacy policy