The Greatest Confession in 2,000 Years 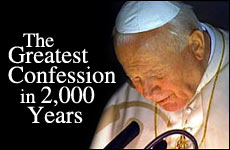 The pope's legacy to the Jews.

As the world mourns the death of Pope John Paul II, we present this commentary written in March, 2000.

The Baltimore Catechism instructed generations of American
Roman Catholics that the marks of the church are four: It is
one, holy, catholic, and apostolic.

Comes now Pope John Paul II and adds a fifth: It is sinful.

"Lord God," the pope prayed on Sunday, "your pilgrim church
... counts among her children in every age ... members whose
disobedience to you contradicts the faith we profess ...
Forgive our sins."

To be sure, the pope was not technically confessing the sins
of the church itself, but those of "her children." No matter.
The Bishop of Rome was begging forgiveness for the cruelties
and evils that have been done in the name of the Church of
Rome. This was unprecedented, another milestone in what has
proven to be the most consequential papacy in centuries.


An abiding commitment to truth has been a hallmark of John
Paul's stewardship. That was apparent from the outset, when
he refused to mince words in speaking about totalitarianism.
His challenge to the legitimacy of the Evil Empire triggered
the fall of Communism in Europe. And that challenge was
fueled above all by a determination, as he put it, "to call
good and evil by name."

In his biography of John Paul II, George Weigel quotes a
Polish student for whom the pope's pilgrimage to Poland in
1979 was a turning point. "We might have to live and die
under Communism," the student said. "But now what I want to
do is to live without being a liar." Moscow could withstand
much, but not the pope's assault on the falsehoods that
propped up Soviet rule.

John Paul would have been a hypocrite if his passion for truth
had ducked the long history of Roman Catholicism. It didn't.
For years, he has spoken of the need for the church to search
its conscience; in a 1994 apostolic letter, he made it
explicit. "As the second millennium of Christianity draws to
a close," he wrote, "the Church should become more fully
conscious of the sinfulness of her children, recalling all
those times in history when they . . . indulged in ways of
thinking and acting that were truly forms of counterwitness
and scandal."

He has practiced what he preached. In 1998, one scholar
counted 94 occasions on which John Paul had confessed the sins
and failings of Christians, in matters ranging from the
treatment of women to the treatment of Galileo. Since then,
he has pushed the total well into triple digits.

The pope's plea for forgiveness does not, needless to say,
undo the crimes committed in the name of the church. The Jews
and Muslims slaughtered during the Crusades, the innocents
burned at the stake during the Inquisition, the massacre of
French Protestants on St. Bartholomew's Day and in the Wars of
Religion, the forced conversion of non-Christians -- the agony
of the victims is not lessened retroactively by John Paul's
prayers. Neither is the guilt of their tormentors. "What's
done is done," Lance Morrow writes at Time.com. "The ashes of
heretics burned centuries ago are cold indeed."

In any case, genuine forgiveness can be granted only by the
one who was sinned against. The Talmud teaches that God does
not forgive the sins we commit against others unless we seek
their pardon first. That is why murder is literally
unforgivable: How can a dead man absolve his killer?

All this the pope knew, of course. Just as he knew that no
confession of the church's sins would be sufficient for the
church's critics. Sure enough, scarcely were the prayers
uttered last Sunday than the reproaches began.

Some of these reproaches were the standard PC litany. "The
pope's apology for discrimination against women is welcome but
difficult to square with his continued opposition to abortion
and birth control, and to women in the priesthood,"
editorialized The New York Times. "Regrettably, he made no
mention of discrimination against homosexuals." The pope, in
other words, should have apologized for being Catholic.

Other criticisms are not so easy to evade. Why did the pope,
many asked, make no mention of the Holocaust? The stony
silence of Pius XII, who spoke not a public word in defense of
the Jews as millions were shipped to the death camps, was a
woeful moral failing. Perhaps the explanation has to do with
timing. Next week John Paul will visit Yad Vashem, the
Israeli Holocaust memorial; that will be the place for him to
talk about the reticence of the church during the blackest
moment in Western history.

In the end, however, no amount of second-guessing can diminish
what this pope has done. For centuries the church has claimed
to be infallible in matters of morals. For centuries the
church denied responsibility for the brutality and slaughter
committed in its name. Yet now, on the verge of its third
millennium, all that is overthrown. A staunchly conservative
pope has done something revolutionary. John Paul "has struck
a blow at the forces of demonization within religion," says
Richard Landes, a medieval historian at Boston University,
"and he has begun with his own religion and his own
institutions."

If the Roman Catholic church -- the most powerful,
hierarchical, and far-flung church in the world -- can confess
its gravest failings, what excuse is there for any religion --
for any institution -- not to do likewise?

The pope's confession is a moral event of seismic proportions.
The 21st century will be shaped by its aftershocks.

Zoom Bombed: Take a Stand Against Racism and Anti-Semitism

How To Work Miracles - The God Factor: Part 2