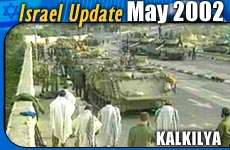 In this issue: Exploding myths, a visit to the Holy Land, and the question of pigskin for terrorists.

“For tactical reasons, Jordan, which is a sovereign state with defined borders, cannot raise claims to Haifa and Jaffa. While as a Palestinian, I can undoubtedly demand Haifa, Jaffa, Beer-Sheva and Jerusalem. However, the moment we reclaim our right to all of Palestine, we will not wait even a minute to unite Palestine and Jordan."

Moslem clerics have responded with mockery to the myth that putting pigskin on the bodies of Muslim terrorists prevents them from entering paradise.

Sheikh Palazzi, head of the Italian Islamic Community and an outspoken supporter of Israel, told IMRA:

"In traditional Sunni Islam, the status of the intermediate period between death and resurrection is such that an eventual profanation of the copse or its contact with impure substances can cause pains for the soul, and this is the reasons why corpses are accurately washed from any unclean substance and enwrapped.

"The only exception to this rule is the case of a shahid (martyr). Eventual outrages to his corpse are in that case considered part of his martyrdom, do not cause pain to the soul, but on the contrary make his reward in the world-to-come even greater. Consequently, the body of a shahid is never washed and enwrapped."

This week, the online publication Slate.com published an excellent analysis piece, "Why Israel is Winning the War Against Suicide Bombers" by Jonathan Chait. An excerpt:

Last week a suicide bomber killed 15 Israelis outside of Tel Aviv. Here is how a New York Times editorial reacted: "But as was sadly demonstrated again yesterday, no amount of military action can stop the suicidal madness. That can only happen if there is Palestinian moderation, Israeli restraint and progress toward an equitable settlement."

You have probably read sentiments along these lines so many times that this reasoning sounds sensible. But it's complete nonsense. First of all, the bomber came from the radical group Hamas, which openly rejects any peace with Israel and tends to strike anytime progress toward peace appears imminent. So, far from deterring suicide bombings by Hamas, an "equitable settlement" would likely have provoked more.

Second, prior to Israel's offensive in the West Bank, suicide bombers were striking at nearly a once-a-day rate. Since then, they've struck at a rate closer to once a month. Third, last week's attacker came from the one location (the Gaza Strip) that Israel didn't target.

Moshe owns and operates the Shorashim Gift Shop in the Jewish Quarter of Jerusalem (http://www.shorashim.net). He told the following story:

In a town in New Jersey a father picked up his son up from school. The boy was a month away from being a Bar Mitzvah. There is an old custom of beginning to wear the Teffilin (phylacteries) a month before one's 13th birthday. The boy was going to celebrate this first time with his family and school friends that Thursday, and his father was picking him up in order to buy the boy a suit for the occasion.

The boy noticed the serious look in his father's eyes.

"Son," his father said, "I'm not going with you to the party in school on Thursday."

The boy was flabbergasted. "But Dad, this only happens once! How can you miss it?"

His father looked at him and said: "We're also not going to get you a suit today. Actually we're on our way to the airport. You and I are going to Jerusalem, and the first time you put on Tefillin is going to be at the Western Wall."

When they came into my gift shop several days later, the father explained that not only was this the best way to commemorate this moment in his son's life. He felt that this "trip" at this time in Israel's life was the most apt lesson he could pass on to his son. The boy was euphoric and learned that no celebration is complete in a Jew's life without including and heartening Jerusalem.

In Praise of Abnormality

Disappearance of Bishop Tutu
It Takes A Lot Of Faith To Be An Atheist
How Instagram Brought Back This Nostalgic Soup
What Makes Eli Run?
Comments
MOST POPULAR IN Israel
Our privacy policy