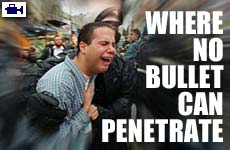 First-person account of the shooting spree on Jaffa Road.

Shmuel Waldman was glad the bus had finally arrived. He'd finished early that day and was eager to get home to his wife.

A few paces away, 19-year-old Shayna Gould was in a great mood. She was on her cell-phone talking to her girlfriend in London. Her parents had bought her a ticket to visit her friend as a birthday/Chanukah gift and they had lots of plans to make.

The bus arrived and Shmuel hopped on. He'd barely reached the top of the steps when heard a noise that instantly turned his stomach.

Back in London, Shayna's girlfriend heard it too. Over the din of the Jerusalem street-noise, it was unmistakable. And terrifying...

Shayna's laughter was suddenly silenced as the bullet pierced her upper chest, puncturing a lung.

Before Shmuel could jump for cover, it was too late. He was hit at point blank range. Two bullets tore his leg open.

Over a year ago, Shayna's parents supported her decision to leave Chicago and come to Israel to learn about her Jewish roots. They were fully aware of the potential dangers involved, but in the words of her sister Jessica: "There was just no stopping her! Shayna worked hard to get to Israel. She worked in kosher restaurants to save money, and she even made special 'Send Shayna to Israel' tzedakah boxes to help out with the expenses."

On this, her second trip to Israel, Shayna spent her days learning Torah at the Neve Yerushalayim Seminary, and took every opportunity of free time to tour the country.

Shmuel, a Borough Park, NY native in his 20s, moved to Israel nearly five years ago, also to study Torah. He got married six months ago.

Nothing could have prepared either of them for what happened...

4:15 p.m. Pools of blood litter the sidewalk. A nauseating smell mingles with the afternoon rain. Loved ones try to reassure one another through the tears.

Shayna is oblivious to the yelling, panic and sirens as she is put into a Magen David Adam ambulance. She has lost a lot of blood and her condition is critical. She doesn't have much time, and Shai, the driver, knows it. As he races through the narrow streets of Jerusalem, he made a move that may have well saved Shayna's life: He calls his wife who (“coincidentally”) was working at the hospital that afternoon. He tells her to break standard hospital procedures and prep the operating room immediately, bypassing trauma and all other delays.

Shayna's heart stopped on the operating table. She had no pulse. No blood. Her heart was dry.

Shayna's father later explained: "By the time they arrived, the medical personnel were waiting. Shayna's heart stopped on the operating table. She had no pulse. No blood. Her heart was dry. They literally had to refill her with blood -- and bring her back to life."

THE MERIT OF A MITZVAH

Back on Jaffa Road, another extraordinary event had been unfolding.

The terrorist had opened fire like a madman -- spraying his M-16 semi-automatic rifle haphazardly in all directions, trying to kill or maim as many Jews as possible.

Shmuel Waldman had also been waiting at that bus stop. But Someone had other plans. A young man was stranded without bus fare, and asked Shmuel if he could help. Even though he was a stranger, this was a fellow Jew, and Shmuel wanted to help.

Since Shmuel didn't have any coins, he went to a nearby kiosk to get change to help the stranger. Shmuel gave the change to the stranger, and then immediately started to board a passing bus. It was at that moment that the terrorist began his shooting spree, with Shmuel getting the first two bullets.

Shmuel's life was spared. If he wouldn't have done kindness for a stranger, he would have been waiting at the original bus stop where the terrorist concentrated his fire.

As the shooting began, an old man jumped onto the bus for cover. He fell, landing on top of Shmuel's ruptured leg. When the old man saw the blood, he thought it was his own, and began to panic. Shmuel was worried that the man would go into shock, and somehow managed to disregard his own pain, working intently to keep the man as calm as possible, ensuring that he didn't go into shock.

The bus driver didn't waste a moment either. Like a scene out of a bad movie, he put his head down and maneuvered the mammoth vehicle through traffic, directly to the hospital.

Amongst the craziness, Shmuel managed to place quick cell-calls to his wife and family to let them know that he's “okay.”

Meanwhile, halfway across the globe in Brooklyn, NY, Shmuel's parents were scrambling to arrange a flight. No sooner had they made the booking, when they got a call from a few members of the local Jewish community, whom they only knew by acquaintance. "Do you need any help?" they asked. "What flight are you on?"

Shmuel's father explained that the best they could secure was a late-night flight. "Don't worry, we'll get you on the next flight out of here. Just be ready!"

The next thing they knew, the Waldmans had an 80 mph NYC police escort to the state line, where -- like an Olympic relay team -- there was a seamless change-over with the New Jersey police across the bridge. Less than 90 minutes after the initial phone call, they were on the airplane. The men had even arranged a complimentary upgrade to business class, to make their anxious journey a little easier.

Two women lost their lives that day. Over 40 were injured. Shmuel and Shayna consider themselves among the lucky ones.

“It's not like a car accident. Somebody tried to kill you and their comrades are still out there, looking to finish you off.”

Among the victims, many suffer from trauma and shock. “It's not like a car accident,” said the relative of one victim. “In this case, somebody tried to kill you. And you know that their comrades are still out there, looking to finish you off.”

A week later, the dust has settled, somewhat, and the families are putting the pieces of their life back together again.

Shmuel has been in and out of grueling surgeries. His leg is healing, but the emotional trauma plagues him.

Shayna lost a lung. She also lost all memory of the attack.

Slowly, so as not to overwhelm her, her family is reconstructing the events of last week. When she eventually learned that she had been shot, her reaction surprised many people.

Her mother adds: "Shayna was very concerned for the man who shot her - out of humanity sake. 'Why would another man have to die', she said, 'even though I was shot?'"

Shmuel's reaction was similar. "I'm not into revenge," he said. "All it does is build up hatred in people. I know there's a God in this world and that everything serves a purpose -- even the guy who shot me. I think it's sad, though, that they allow themselves to shed so much blood in the name of God. It's just sad."

This sharply contrasts the Palestinian militias who constantly call for “revenge,” and claim that this attack and others (including the Bat Mitzvah shooting which left 6 dead) were in revenge for the IDF's killing of a known terrorist.

"Why is this happening?" we ask ourselves, mournfully, rhetorically. "What can we do?"

The world heaves a collective sigh -- and then weaves back into traffic.

On days like this, everything seems so bleak. So lost.

But the truth is, it's not. Sometimes it takes an experience of this magnitude, to bring out the true colors of a Jew.

When Sayyid Ibrahim Ramadan opened fire on Jaffa Road, he underestimated the power and resolve of the Jewish nation.

"Terrorist attacks prove nothing, gain nothing, and solve nothing," says Shayna's father. "Sure, he caused a lot of pain. But was that the goal? If he's hoping to discourage Jews, it won't work. Shayna still wants to stay in Israel!"

Shmuel and his wife have no intention of leaving either.

Perhaps Ramadan and the rest of the terrorist world don't yet understand: This battle is fought in a place where no bullet can penetrate. The deepest place. The place that makes a Jew a Jew.

Wayne Kopping is an award-winning filmmaker.

Too Close to Home

Arthur Cohn: Guardian of Zion
The Japanese Everything Bagel Spice Recipe
How To Stock A Jewish Pantry Wherever You Live
Blessing on Chewing Gum
Comments
MOST POPULAR IN Israel
Our privacy policy