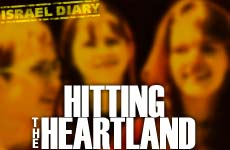 A group of Aish students tour America, and discover that a good idea is worth pursuing.

During the last two weeks, three friends and I traveled across the Midwestern U.S. speaking to college students about the current situation in Israel.

A few weeks earlier, the four of us were sitting at Aish HaTorah in Jerusalem, where we all currently study, frustrated by the crisis Israel is facing. Most frustrating of all was the fact that Jews outside of Israel were not receiving the full picture. They were getting most of their perceptions from a mass media, which has been anything but unbiased. We wanted to reach out to fellow Jews, especially those in our age group, to let them know that Israel is not the "immoral Goliath" it is often reported to be.

Everybody in the world has good ideas; ones we know could make a big difference. But usually we don't act on them. Why not? Perhaps we get distracted and lazy. But I think the most common reason is that we begin to doubt ourselves and say, "This won't really make a difference. It's not so important, anyway."

Our campus tour showed me loud and clear that we, as individuals, can make a big difference.

We knew from the beginning that our idea was worthwhile, though we weren't sure if it would become a reality. We received a lot of encouragement from rabbis and fellow students. We began calling Hillel Houses and AIPAC chapters at various universities, with the idea of arranging group seminars. The response was overwhelmingly positive. Students were lacking information and support for Israel was waning. We set up dates over a two-week period, and before we knew it, we were on an airplane to America.

Over two weeks, we went to nine different campuses, including the universities of Michigan, Wisconsin, Indiana and Northwestern. The majority of students we spoke with, while emotionally supportive of Israel, were empty of knowledge to intellectually defend their position. With an onslaught of pressure from various Arab student groups, many of the Jewish students felt pushed into a corner, with nothing to answer back.

Our message to them was strong and clear:

1) Israel has always been, and continues to be, a nation pursuing peace. From the acceptance of the UN's partition plan in 1947... to the giving away of the Sinai Peninsula to Egypt, a country which had attacked and lost a series of wars... to the recent Camp David meetings where Prime Minister Barak went further than any previous Israeli leader, Israel's consistent message has been the pursuit of peace.

2) While many Arabs also want peace, the leadership is not sending that message to their own people. Through incitement on television (including children's programming), through government-created textbooks and through religious preaching, the Palestinian Authority is indoctrinating its public, and especially its children, to hate Jews with a violent passion. No signing of a piece of paper can bring peace when children -- the next generation of adults -- are being taught to hate.

3) The Israeli army is acting with amazing restraint, in complete opposition to their portrayal in the international media. One of the guys traveling with us was a soldier in the Israeli army, and his description of the orders he is given as a soldier completely contradict the perception that the Israeli army is "purposely killing innocent children." Israel has acted responsibly and even put its own soldiers' lives in danger in order not to inflame the confrontations.

4) The media has often been inaccurate, and at times, outright biased. From misinformation, to a lack of context, viewers need to be aware that the media is often not a reliable source to understand what is happening in Israel.

One of our biggest worries during our preparations was the reaction we would receive from Arab students who would inevitably come to our talks. While we are all knowledgeable and passionate about the Middle East situation, surely it was possible that we would be challenged or confronted.

At our first school, Northwestern University, we were immediately put to the test. An Arab student, who happened to be the son of the Palestinian Authority Minister of Agriculture, came to hear us out. To his credit, he was polite and allowed us to go through with our presentation. But once we started the Q&A session, his challenge began.

He first challenged us (unsuccessfully) on a quote from Yassir Arafat, displaying a lack of honesty in signing the Oslo Accords. He next claimed that the entire Middle Eastern conflict would be solved if only Israel would abide by UN resolutions passed -- purposely omitting the resolutions call on peaceful compliance from the Arab side. We knew we had clearly won the debate when he blurted out the ridiculous statement that "Ariel Sharon is a known terrorist!" We had faced and overcome our first challenge.

Our true message to these students, though, was to show them that what is happening in Israel should matter to them. In the last couple of months there have been anti-Semitic attacks all over the world. The Simon Wiesenthal center reported over 80 attacks in Australia alone! What is happening in Israel is not just something "over there," but rather it affects all Jews, no matter their location, religious observance or cultural identity.

For good or for bad, in times of crisis, Jews unite, and these students needed to know that their support and unity with Israel at this time was crucial.

In the end, we knew our efforts had a deep impact. Wherever we went, students told us how much they learned and how much stronger they now felt in their support for Israel and their identity as Jews. A few have even decided to come to Israel in the next few weeks on tour-and-study programs.

One student sent me an email following the talk at Indiana University:

I want to thank you for coming to IU and talking about Israel. My Judaism is so important to me, but since I don't live in Israel and am not a Jewish Studies major, I get a little out of the loop sometimes! I think it's incredible the lengths Israel is going to fight as honorably as possible, and even to harm as few of their enemies as possible. I totally agree that the best way I can show my support is by going over there. I'm not sure why that makes sense to me, but maybe it's that I too will have to endure all the same feelings that Israelis do everyday, even if it's only for a few weeks.

DETERMINED TO DO MORE

For us, the biggest revelation was the discovery that we could make a difference. We began with an idea in our heads, and through determination and support of others, we made it reality.

For future ideas, we have no more room for excuses. When something needs to get done, no matter the obstacles or the "reality" standing in the way, we have a responsibility to act. Just imagine the impact we could collectively make, if every one of us shook off our self-doubt and took action today.

My Name is not Susan

Unstuck: The Aliyah Chronicles
Would You Rather Be Right or Happy?
Korach’s Unique Punishment
Who Was Josephus? The Controversial Backstory of the Famed Historian
Comments
MOST POPULAR IN Israel
Our privacy policy