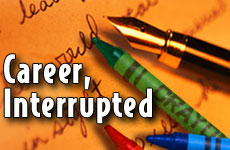 I have never second-guessed my decision to be a stay-at-home mother, but getting the head and heart to merge has been tough.

Fifteen years ago, I willingly surrendered my company-issued American Express card in favor of a spit-up bib and a new life trying to squeeze a career into a tiny corner of a tiny bedroom with a tiny baby, all in my "spare time." Over the next several years, I watched as former colleagues zipped ahead in their careers, snagging promotions and continuing to have a good reason to dress up each day and shoot out the door to be A Professional. It didn't take long for me to feel left behind.

I have never second-guessed my decision to be a stay-at-home mother, but getting the head and heart to merge has been tough. I first felt pangs of career envy when my first son was still a baby. Before he was born, I had worked in health care public relations, both at a university and in the private sector. Both jobs were fun, energizing, and stimulating. When my son was born, I began part-time freelance writing and editing. That day, I was flipping through a magazine that had come in the mail. I was struck by the editor's photo that accompanied her column, because she looked to be about my age. That might have been me, I thought, alarmed by the unsavory jealousy welling up inside.

That might have been me, I thought, alarmed by the unsavory jealousy welling up inside.

I stared at the editor's photo a little too long. She was dressed smartly but with studied casualness, without so much as a single Little Tikes Push-and-Ride Doll Walker or a tap-and-tune piano to clutter her office. In my mind, I fast-forwarded an image of my life over the next decade, as I hoped to have more children (a hope that was blessedly fulfilled) and other women, like this young editor, collected more prestigious magazine clips, pay raises, and accolades for their work.

What I have is invaluable compared to that, I told myself, believing it yet not feeling it. She may not even be married yet! Since I had no department meeting to attend, I put my son in the stroller and went out for a walk to try to rid my mind of that annoying photo.

But when you are passionate about something, you can never give it up. And since childhood, writing has been that passion for me. Motherhood might have blunted my career, but it could never stop me from writing.

Since giving up my office job for motherhood, I have written for pay and written for free; anything to keep my skills fresh and sharp. As a freelance writer, though, my work is so hit-and-miss that I often feel I'm often banging my head against the wall. While I sometimes hit the jackpot with lucrative assignments, I fight hard for every sale I get. More often, I spend a huge amount of time preparing pitch letters for writing projects that won't end up as assignments, and trying to promote my books to a public already on information overload. But that is the nature of this particular beast, and I have chosen it as the price to pay for my writing passion.

Still, my decision to stay home with my kids has fueled my career in unexpected ways. By the time my four kids were all school-age, I was seized with an idea for a humor book about motherhood, an idea that became "Carpool Tunnel Syndrome: Motherhood as Shuttle Diplomacy." The kids had mixed feelings about being used as fodder for the book, but they were also proud that their mother was a "real" author. Since 2000, I have had two books published, and those books, in turn, helped me to wrestle my way in to writing (on occasion) for some top-paying magazines.

I also recognize my good fortune that I am able to pursue this dicey work while my husband supports our family. If we had to depend on my income to live, we'd probably have to move to a tent city. I know that countless women do not have the luxury that I have had to work part-time, by choice, on projects that are almost entirely speculative and where big payoffs are rare.

As I watch them grow into secure and reasonably happy individuals, I like to think that my having stayed home with them has had something to do with it.

Often, I have heard friends yearn for the professional fulfillment they left behind when they closed their office doors behind them to take care of their children. And after a prolonged absence in the workplace, they may also have a tougher time getting back into their fields, perhaps no longer current with industry trends. Some clever moms have used their mothering experiences in resumes, listing jobs as "social director for primary-aged children" and "transportation director for school field trips," to show the diversity of the skills that moms demonstrate on a daily basis. But more often, women who are wonderfully creative end up settling for jobs because they mesh with their carpool schedules, yet are far beneath their creative capabilities. After all, there are bills to be paid.

Motherhood is a full-time job, and while I may have missed out on some career opportunities, I have never missed the tension and stress that being a full-time career mom would have brought into my life. For example, I've always had a strange reaction when one of my children wakes up sick. Of course, I'm distressed that they are sick, but I am also hugely relieved that I don't have to choose between calling in to work sick, perhaps jeopardizing my job, or having to take my child to a "sick child day care" or other non-home environment. I'm thrilled that my own "flex-time" schedule allows me to come to the class performance at 2:00 p.m. on a Wednesday, that I can drive on a field trip, or make an afternoon parent-teacher conference, without worrying about what my boss will say when I'm out of the office again.

As the years have gone by, I've had fewer jealousy pangs over seeing photos of young (and increasingly younger) magazine editors. My biggest and most important career investment is not in any magazine articles or books I have written. Those will all eventually gather dust, get tossed, go out of print. But my kids are the investment of a lifetime. As I watch them grow into secure and reasonably happy individuals, I like to think that my having stayed home with them has had something to do with it. My career may have been interrupted, but it can wait. My kids are growing up now.

Wanted by the FBI
Faith: the Axis Upon Which the Wheel of Science Turns
Love - Not Just About Chemicals Anymore!
Is There a Moral Code in a Virtual World?
Comments
MOST POPULAR IN Current Issues
Our privacy policy