The Tightrope of Life 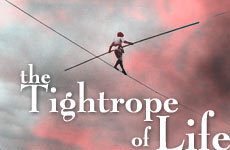 Terrorists aim to destroy the survivors as well by instilling a sense of paralyzing fear. We must not let them win the war against our nerves.

The morning broadcaster on New York City's WINS news declared in
astonishment: "Traffic on FDR Drive is at a standstill, as everybody is
getting out of their cars to watch the amazing spectacle occurring at the
top of the World Trade Center!"

This happened on a sweltering morning, August 7, 1974, when the Twin Towers
were near completion. There was little or no security at the construction
site, and the stunt artist smuggled in the rope at night, shot the end of
the rope to the other tower, tightened it, and walked across in the morning.
The tightrope walker was a young Frenchman, Phillipe Petit, who became
famous from this, his first public stunt of such magnitude.


Most New Yorkers had lots of sympathy for Mr. Petit when the police arrested
him for trespassing and disturbing the public order.

When the law and the emotions are in conflict, it can be difficult to
identify the "good guy" and the "bad guy."

For the past 30 years, the world was generally ambivalent, understanding and
even sympathetic at times to terrorism. The squalid conditions in refugee
camps, the freedom fighters' determination, their role as the underdog,
etc., all bred confusion in the public mind as to whether terrorism can or
should be justified, condemned, tolerated, discouraged, or anywhere in
between.

All this changed in one morning. Terrorism in its full ugly force had hit
home, not in some faraway country in the Middle East. The personal self-confidence and security was shattered almost immediately. Now what? Should we no longer
work in skyscrapers? Should we ban air travel? Terrorists can even plow into
a stadium full of people, and wreak havoc in a flea market.

Our lives seem to be enveloped with a sense of insecurity and disquiet.

President Bush is promising to uproot terrorism, and to go after those who
support and harbor the terrorists.

It is difficult dealing with terrorism. It is an unclear enemy. A terrorist
is just one person, with a small team of radicals like himself, and has many
substitutes even after he is eliminated. There are no international
boundaries, buildings or even specific people, when it comes to terrorism.

Here in Israel, we've tried negotiating with terrorism, and we've tried
fighting them. Nothing much has helped. It is an invisible and nebulous
enemy.

What can we do?

On the personal level, we need to maintain our sanity. We cannot live in
a state of constant fear. Bolster your trust in God. Pray that He
destroy our enemies - visible and invisible - before they destroy humanity. Our prayers should be more intense.

Be suspicious, but not paranoid. Balance the extreme fear by plunging into acts of loving-kindness and giving to others.

Rabbi Yekutiel Halberstam, Rabbi of Klauseburg (and later in New York and
Israel), was a prisoner in the concentration camps. His wife and eleven
children were killed in Auschwitz. He had all the reasons in the world to
be in despair, depressed and be suspicious of every person. Yet, throughout the war, he helped other inmates and gave away from his own rations in order to save some starving "Muzzlemen."

Instead of capitulating to fear and depression, he garnered his strength and did for others.

After the war, when he realized the magnitude of the destruction, he did not become discouraged. To the contrary, he was so tempestuous and active. He opened schools for the refugees. He collected money to feed and dress hundreds of orphans. He went back to the camps and buried the skeletons of those that were still to be found. He came to New York and opened schools. Later, he built the Laniado Hospital in Netanya, Israel. The list goes on and on.

He did not capitulate to fear and depression, the plagues that befell many after the war. He garnered his strength, and did for others.

The terrorist's ideal is to destroy the survivors as well; instill fear
in them, so that they become paralyzed and inactive. Do not let
them win the war against our nerves. Caution - yes! Being petrified - no!

The attacks in New York and Washington also demonstrate that human power
and wealth has no bearing on the ultimate happiness and security of the
person. Let us treat all friends as equals; money, power and status should
cease to be the barometer in our attitude towards others.

Ironically, on the very next day that Mr. Petit did his acrobatic and
daring performance between the Twin Tower roofs, President Richard Nixon
announced his resignation from office. In his farewell speech to the White
House staff, the president said an extremely moving speech, "One can never
appreciate the highest mountains, unless he has been in the deepest
valleys..."

Perhaps, with our new perspective of recent events, we will now start
appreciating all the great gifts of God. Let's stop taking, even the most common and simplest things, for granted. Let us learn to appreciate our family and friends. And start thanking God for all that He gives to us.

With the merit of good deeds, we shall, God willing, be deserving of the
redemption, where a just and peaceful world will replace the fear and agony
we now experience.

Rabbi Pinchas Waldman teaches at Dvar Yerushalayim, and is a resident expert at Aish.com's "Ask the Rabbi."