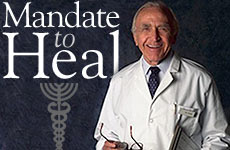 What is the role of a physician in Jewish law?

We take for granted that Judaism allows us to go to the doctor when we are ill. We pride ourselves on being a "rational" religion whose dictates usually mesh with common sense. When someone is seriously ill, we are zealous to desecrate the Sabbath to save their life because the Torah clearly states "and you shall live by them (the mitzvot)" which the sages of the Talmud explain to mean, "to live by them, and not die by them."

In fact, medical issues occupy a great deal of space in the Talmud and throughout Jewish literature dating back to the Torah. The long tradition of great physicians throughout Jewish history, (who incidentally were also great rabbis -- the most famous being Moses Maimonides), would appear to firmly establish the Torah's positive attitude towards medicine and physicians.

IS THERE A MANDATE TO HEAL?

There actually is a great deal of controversy in Jewish halachic literature as to where we derive the mandate to heal. While most authorities derive a very broad mandate, there are a few very famous minority opinions that severely limit the scope of the authorization to provide medical care.

The most obvious source to look for the authority to heal would be from the case of two men fighting in Exodus 21:18-19. If one man strikes another and the victim does not die (which might make it a capital crime), "[the aggressor] shall pay for his [lost] time [from work] and he shall cause [the victim] to be thoroughly healed."

Rashi, the great Biblical commentator, learns that this passage instructs us that "he shall pay the fee of the physician." Clearly, if the aggressor is commanded to pay the doctor's bills, then seeking medical treatment and providing medical treatment must be not only permissible, but also obligatory.

Not so, writes the Ibn Ezra, another great Biblical commentator. The command to heal "is a sign that permission has been granted to physicians to heal blows and wounds that are externally visible. But, all internal illnesses are in God's hand to heal."

WHY QUESTION THE MANDATE TO HEAL?

Why does the Ibn Ezra take a limited view of the mandate to heal? Are we indeed in agreement with the Christian scientists who teach that all healing comes from God, to the exclusion of human medical intervention? The Ibn Ezra's case is not a hard one to make. The Torah itself instructs that if we listen carefully to the mitzvot of the Torah "then any of the diseases that I placed upon Egypt, I will not bring upon you, for "I am God, your Healer" Exodus 15:26.

This verse implies that God does not need man to cure the afflictions that He creates. The Ibn Ezra argues that the meaning of this Torah passage is that because God acts as the (sole) healer of all illness, we will not need physicians. If this is the case, is it not a lack of faith that would lead us to seek medical care?

If the Ibn Ezra is correct, by what virtue does man attempt to "short circuit" God's will and attempt his own meager cures? Does man have any right to heal at all, and if he does, are there any limitations on how it may be accomplished? Is every action done in the name of therapy justified, solely because a physician performs it?

WHY DO WE GO TO DOCTORS?

Because Judaism recognizes the enormity of these questions, it requires direct permission from God to permit the practice of medicine and carefully circumscribes the limits of medical practice. The duty to save one's fellow man is well grounded in the Torah and the restrictions are discussed at length in our codes of Jewish law.

"The Torah gives permission to the physician to heal; moreover, this is a mitzvah."

The complexity of the previously mentioned philosophical tension between God's control of health and the role of the human healer is encapsulated by the enigmatic opening words of the Code of Jewish Law's discussion of the laws applying to physicians : "The Torah gives permission to the physician to heal; moreover, this is a mitzvah (religious obligation) and it is included in the mitzvah of saving a life; and, if he withholds his services, he is considered a shedder of blood."

This sentence is rather puzzling. We do not find the Code of Jewish Law informing us that the Torah gives permission to keep kosher, the Sabbath, or any of the other mitzvot enumerated in the Torah. Why is permission specifically granted here? Because only here we may have thought that the action should be forbidden. Left to our own logic, we would have no choice but to assume that God makes people sick and God alone heals.

So, are the Christian scientists correct? No, they are not. Once the Torah clearly stated that healing is permitted, it immediately becomes a mitzvah -- a religious obligation -- like all other mitzvot. Therefore, the Code of Jewish Law quite appropriately states that "The Torah gives permission to the physician to heal; moreover, this is a mitzvah."

THE JEWISH VIEW OF THE PHYSICIAN

What is the Jewish approach to the physician? There is a fascinating insight about Asa [King of Israel] when he became ill. The Bible records that: when he became sick, "he did not seek out God, but only doctors" Chronicles II 16:12.

Healing is a partnership between God and a man.

If healing and guarding health are mitzvot, what did King Asa do wrong? His error was that he only sought out the doctors. Healing is a partnership between God and a man. While God is the ultimate healer, He delegates part of His role to mankind and asks the physician to practice medicine for the good of man. This relationship can be conceived of as follows: God makes a person ill until he finds the right doctor to heal him.

That is, part of the "punishment" of illness is the fear that one will not find the right physician capable of healing him. This is why the Code of Jewish Law states: "if he withholds his services, he is considered a shedder of blood. And even if there is someone else (available) capable of healing, not every physician is able to heal every patient."

Medicine is an art and therefore one must pray that he finds the right doctor who can cure him. Similarly, no physician may excuse himself from a case merely because there is another physician present, for he may be the one destined to cure this patient (i.e. he may be the one who will make the right diagnosis and prescribe appropriate treatment when all others are baffled or incorrect). This approach must obviously exist within the reality of the physical limitations of each physician.

The Jewish approach to illness and medicine requires us to recognize the preeminent role of God in healing, while seeking appropriate medical care. Asa's sin was seeking out the doctors only, without the recognition of God as the ultimate healer.

The Talmud states: "tov sh'brofim l'gehenim" which is colloquially translated as "the best of the doctors are bound for hell." Such a statement appears antithetical to the positive view Judaism promulgates regarding physicians. One traditional explanation is that the physician must recognize the awesome responsibility that he holds in treating illness, with even a small error possibly leading to death. Constant vigilance is required to avoid making a preventable error that would be considered bordering on criminal negligence.

A second understanding of this mysterious passage sheds light on one of the great risks of medical practice -- arrogance. The statement can be understood to mean that it the specifically those doctors who consider themselves to be the best that are bound for gehenim. The humble physician will realize his limitations and consult with colleagues, bringing the best care to his patients. The "best" doctor will see no need to consult with those less qualified than himself, eventually causing unnecessary harm to a patient for which he will be culpable.

Like the patient, the physician must have the same recognition of his role as an intermediary in healing, not its source. When the physician begins seeing himself as the source of healing, he is destined for gehenim.

With this understanding it is quite logical that, despite the normative Jewish attitude that considers healing to be a mitzvah, even in the most expansive Jewish approach to medicine, there are limits to the authorization to heal. With the sacred privilege of healing come inherent limitations. For example, the thought of a physician assisting a patient to commit suicide is anathema to a Jewish view of medicine. Physicians (and for that matter, anyone else with medical knowledge such as nurses, emergency medical technicians, or lifeguards) are granted a mandate to heal. However, it is unequivocally clear from halacha that permission is granted to a physician to treat a patient only when he can offer that patient therapy that can be reasonably expected to be efficacious. This, at times, may include even experimental treatments that could be helpful.

When a physician cannot offer effective therapy, cannot alleviate pain, and cannot cure the patient, he or she ceases to function as a physician. In such a case, he or she has no more of a license than anyone else to cause harm to another person. Physician-assisted suicide is wrong because it undermines the mandate that the Torah grants to physicians to be God's partners in the treatment of the sick.

We can now appreciate that Judaism believes that both a great opportunity and an awesome responsibility have been granted to physicians. The mandate to heal is a command to rise to the challenge.

Is Stem Cell Research Ethical?
Blessing on Chewing Gum
Was Rahab a Prostitute?
Extras In Our Own Epic
Comments
MOST POPULAR IN Interpersonal
Our privacy policy