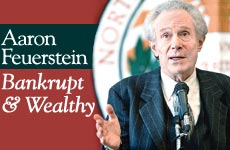 Mr. Feuerstein is a legend in the corporate world. His company is now bankrupt and he doesn't regret a thing.

Malden Mills, of course, is the New England manufacturer of fabrics like Polartec and Polarfleece, "climate control" materials used by companies like Lands End and L.L. Bean in their winter clothing.

Malden's CEO and owner, Aaron Feuerstein, became the focus of broad press attention seven years ago, when a fire ravaged much of his factory and he decided to shun the idea of resuming his operations overseas, and rebuilt the mill in the same Massachusetts community where it had stood. What was more, and even more remarkable, he continued to pay his thousands of idled workers -- whose families were dependent on his factory -- for the months that passed until it was operative again.

"Maybe on paper our company is worthless to Wall Street, but I can tell you it's worth more."

"I have a responsibility to the worker," he told Parade Magazine in 1996, "both blue-collar and white-collar. I have an equal responsibility to the community. It would have been unconscionable to put 3000 people on the streets and deliver a deathblow to the cities of Lawrence and Methuen. Maybe on paper our company is worthless to Wall Street, but I can tell you it's worth more."

A religious Jew, Feuerstein went on to explain that the ideals of his religious heritage had played the major role in his decision, quoting the famous first century Talmudic scholar Hillel twice:

And: "Not all who increase their wealth are wise."

In an era of widespread corporate downsizing, Feuerstein's actions were roundly hailed as a model of both corporate sensitivity and deep menshlichkeit.

Unfortunately, subsequent years brought mounting debt and, while the company may well rebound and thrive again, questions inevitably arose about whether Feuerstein's benevolence may have helped bring his company to bankruptcy.

To Feuerstein, though, the point is moot. In March, when asked by the CBS program "60 Minutes" if, knowing how things played out, he would do the same thing he had done, he responded, "Yes, it was the right thing to do."

We are charged with acting not for the moment but rather for the larger goal.

It was a simple but powerful sentence, reflecting a simple but powerful -- and wholly Jewish -- idea: We are charged with acting not for the moment but rather for the Moment, for the larger goal, for what is right. It is a profoundly subversive thought in a society saturated with unlimited expectations and trained in instant gratification.

One of the very bases of the Torah is that there is an ultimate reward for the just, and punishment for evil. But from our limited vantage point as mortals, we cannot see that, and so are anguished at the "bad things" that seem to happen to "good people" and vice versa. But being a believing Jew means trusting that God knows, even if we don't, just what He is doing. A time will come when clarity will replace confusion, when understanding will supplant puzzlement.

At times, one encounters a word or phrase that may seem unremarkable but becomes considerably more poignant, even striking, when savored slowly and thoughtfully.

Barbara Lee Toffler is an adjunct professor at Columbia University's Graduate School of Business and an expert on corporate responsibility. When asked by The New York Times last November about Mr. Feuerstein's actions in the wake of the Malden Mills fire, and about the company's newly precarious economic prospects, she suggested that "it may have been that the desire to take principled action somehow blinded him to thinking long term."

She had it exactly wrong, of course. Long term was precisely what he was thinking.

The Jewish Ethicist: Ethics and Sportsmanship

The Jewish Ethicist - Forgiving and Forgetting to Ourselves
Chukat 5782: Let’s Play the Blame Game!
The Sin of Moses: The Two Ways to Communicate
In Aftermath of Chicago’s July 4th Shooting, Local Moms Provide Countless Points of Light
Comments
MOST POPULAR IN Current Issues
Our privacy policy