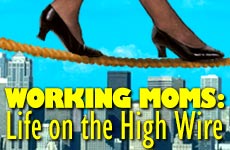 Both the tightrope man and the working mom make it look easy.

It may take one to know one. I can always spot a working mom, especially one with multiple children. If she's in the supermarket, she's the one still in her business suit purposefully stuffing every available nook and cranny of the grocery cart. If she's in a business meeting, she's the one surprising her male colleagues with her consensus-building techniques. "How did we reach a resolution so fast?" the male CEOs wonder, oblivious to the mediation skills of the working mom in their midst.

Of course, a career woman who is also a mother doesn't talk about her children in these high-power surroundings. She hesitates to openly display her feelings of loyalty to her family, as this might reveal where her priorities lie. More often than not the working mom wants to prove that she can be as great an asset to the corporation as any other worker. In fact, a working mother might argue that she brings tools to the workplace. After all, the skills she uses to institute a new operations policy at the office are the same skills she has perfected to get her kids into the habit of putting their dirty clothes down the laundry chute.

Working moms are not only in competition with men in the workplace; they are also competing with other career women trying to rise beyond the glass ceiling. Other women have the advantage of being unencumbered by family pressures so that they can single-mindedly apply themselves to their work. As self-assured and purposeful as a working mom may seem, she always has a certain preoccupied look about her, as if there is some distraction that only she is aware of. Her expression is not unlike that of a high-wire artist carefully balancing himself as he adroitly places one foot in front of the other, gazing forward, never down, with a determinedly confident smile. Both the tightrope man and the working mom make it look easy. But just imagine what they feel in the deep recesses of their hearts when there is any glitch in the routine.

She commissioned the state helicopter to fly her home when she learned that her baby had a medical emergency.

Take the very public example of Lt. Governor of Massachusetts, Jane Swift. Ms. Swift campaigned for office while expecting and gave birth two weeks after she was elected. She campaigned on the principle that her new baby would be an asset, not a liability, in her performance of public duties. Now the Massachusetts government could show itself a bastion of family values in actual practice and not merely in political rhetoric.

Ms. Swift recently had to do a bit of explaining to her constituents, however, in response to certain liberties she took with public funds. What egregious deeds did she commit? She commissioned the state helicopter to fly her home when she learned that her baby had a medical emergency.

On the one hand, we are talking about public funds here so prudence is in order. On the other hand, I have been in a similar situation; on the way to a board meeting, hundreds of miles away, when I learned that my nine-year-old was about to have an emergency appendectomy. So, I can really empathize with Ms. Swift's taking the fastest and most accessible means of transportation home.

Commentary on National Public Radio purported that Ms. Swift got what she asked for because she had made her family such a prominent campaign issue. While the people of Massachusetts may care about family values enough to elect Ms. Swift as governor, they are not willing to share the Lt. Governor with her family.

Let's face it, working mothers are held to a higher standard.

Let's face it, working mothers are held to a higher standard. It really doesn't make a difference if they've chosen to make a working career a part of their life because they need the income or because they need the emotional or intellectual sustenance that work outside the home provides, or for any other reason. Like the hire-wire artist, they had better watch their balance.

A course in public administration might be a first step in organizing the competing needs of office and children. Actually, many of the working moms I know could probably teach the course. I have a friend who is a computer software engineer, who takes three lunch hours per week to volunteer in each of her children's classrooms. That way, the kids are more understanding when Mom just can't reschedule her meeting to catch them in the school Book March for which she spent hours the night before sewing costumes.

My internist has her staff schedule a few minutes in between each patient so she can pump breast milk for her third baby who is with her "stay-at-home Dad." "I feel like Elsie the cow," she admitted to me recently. Is it possible to keep up the nursing and work full time? It's complicated, but most of the working moms I know will make accommodations at work, without jeopardizing the quality of their performance, so they are able to give their kids what they need.

Many working moms, like myself, feel their kids are their greatest accomplishments. Who wants to squander such precious assets – and who wants to deal with the guilt?

Lisa Hiller is VP-Administration for the Helen Bader Foundation, a private family foundation in Milwaukee, Wisconsin, where she oversees human resources, compliance issues, grants and communications management. Lisa holds a Journalism degree from the Medill School of Journalism of Northwestern University, and has worked in communications and non-profit management for over 25 years. Lisa, her husband and seven children are active members of Congregation Beth Jehudah led by Rabbi Michel and Rebbetzin Feige Twerski.