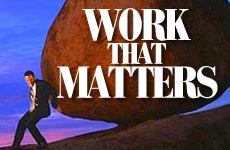 We all face defining moments in our life. In answering the question "Why do we work?" we can each discover our own greatness.

It was that day in 1943. A 19-year old boy from Dorchester, Massachusetts had become a low-beam radar navigator in the United States Air Force. And today was the day for him to fly his first mission... over Germany.

The boy had to make a decision that would leave childhood far behind: Whether or not to wear his Jewish Star of David on his missions. He knew the price. If his plane were shot down, his chances of survival would plummet with that Star.

That boy decided to wear that Star – as have other Jews and other peoples of different nations, religions, races and creeds in similar situations throughout the history of humankind. As the legendary Scot, William Wallace of Braveheart fame, exhorted his men: "Cowards die many times; brave men die only once."

The young man had declared to himself who he was – and who he wanted to be. By that one act, the man who would be my father had also declared the values passed on to his family.

A number of Saturdays ago, I told this story to my Torah study group. Don Robinson, a senior member of the group, asked us this fact-based question: Imagine standing in a line of soldiers, captured by an enemy who commanded every Jewish soldier in the group to take one step forward (and be killed). If you were Jewish, what would you do?

After no response, the stakes were raised: If all the Jews did not step forward, every tenth man in line would be shot and killed. Now, what would you do? How would you balance the instinctual desire for survival with the morality of being true to your identity? Would your answer be different if you had a spouse, children, or dependent parents?

The questions and challenges, the defining moments we face in our careers, may pale in comparison to those of life or death. Still, whether it is a moment that asks you to stand up for your nation, your religion, your beliefs, or for your brothers and sisters – it defines your life forever. Some moments are subtler, many go unnoticed, but their impact over time may be no less, perhaps, than those of life and death.

I often think about my father's challenge. At times, I am envious of its clarity.

I come from a different era. We had no popular war, no common enemy. My identity, my integrity, has never been questioned as starkly and deeply. I have had no war, no frame of reference to know how I would fare, how I would balance two such extreme possible outcomes.

It has made it harder to know who I am and what I stand for.

Yet I do know that in small ways I too have this challenge daily. As I strive to be a better person, a "good" person, I know that it is all those little decisions that will make a difference in living a life that honors what many have died for – a life in harmony with the Ying and the Yang of our existence.

What are your goals in your life? In your work life? What is your career really about, beyond "making a living for my family?"

The promise of the new economy is that we all should do Work That Matters. It is the legacy of men and women like my father. They created a better, safer world for many of us. It is our responsibility to use that gift in a way that honors that tradition, to make this a better world for those with less, for those who suffer.

"How wonderful it is that nobody need wait a single moment before starting to improve the world." -- Anne Frank

There is an old Hassidic story in which everyone is admonished to wear a coat with two pockets in order to receive God's message. In one pocket, the message is: "You are nothing but one of millions upon millions of grains of sand in the universe." In the other pocket the message from God is: "I made the universe just for you."

My Dad was not a practicing Jew or an American zealot. He did what he did because it was how he made sense out of his world, his life and his place in that world. So while to some degree we work to make a living, if that is the only answer, it leads to an incomplete life, an unsatisfying career.

This column will look at why we work and the challenges we face in integrating work into our faith, in how we spend our life energy, and how we honor the gifts of the generations before and after us. For it is in answering this question – why we work – that we each discover our own greatness. That we each fulfill the promise, "I made the universe just for you."

"Can we actually 'know' the universe? My God, it's hard enough finding your way around Chinatown." -- Woody Allen

Mark Albion is the New York Times' Best Selling author of Making a Life, Making a Living® (Warner Books, 2000), currently being translated into several languages, including Chinese and Japanese. Mark spent nearly 20 years at Harvard University and its Business School and in 1993 co-founded Students for Responsible Business (now Net Impact), an international organization of MBAs dedicated to economic and social justice. People as diverse as Ronald Reagan and Mother Teresa have recognized his work, and Business Week has called him "the savior of b-school souls." His global monthly ML2 E-Newsletter, now read in 87 countries by millions, can be found free at his Website: www.makingalife.com.

Over 170 members of his family were killed in the Holocaust, but his parents escaped. The life story of their son, Mike Barr, as a builder of corporate statesmen and women, appears in Chapter 8, "Seek Common Ground for Uncommon Results," in Dr. Albion's New York Times' Best Seller, Making a Life, Making a Living: Reclaiming Your Purpose and Passion in Business and in Life (Warner Books, 2000). The first chapter and excerpts are available on his Making a Life, Making a Living® Website at http://www.makingalife.com/ml2/index.com.

The Jewish Ethicist - My More Observant Spouse
The Blue Beyond
Great Place to Live
Is Eating Supposed To Be Spiritual?
Comments
MOST POPULAR IN Current Issues
Our privacy policy