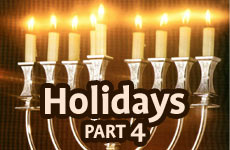 The rabbinic holidays of Chanukah and Purim.

Chanukah celebrates the victory of the Maccabees over the mighty Greek army, and their rededication of the Holy Temple in Jerusalem. Today, we light a Chanukah menorah to commemorate the miracle of oil that lasted eight days.

In the second century BCE, the Greek armies were keen on conquering not only the Jewish state but also the Jewish spirit. They destroyed the Temple in Jerusalem and converted it into a house of idolatry. They also forbade the Jews to observe Shabbat, perform circumcision, and study Torah, under penalty of death. Under such pressures, many Jews chose to abandon Judaism and adopt the Greek (Hellenistic) way of life.

When the Greeks challenged the Jews to sacrifice a pig to a Greek god, a Jewish leader named Matityahu responded by organizing a revolt. After many years of battling unbelievable odds, he and his small army uprooted the Greek enemies and recaptured the Temple. They found only one flask of oil for the Temple's Menorah. This small amount of oil miraculously burned for eight days.1 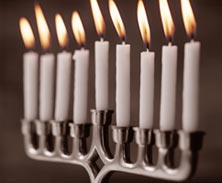 To publicize the Chanukah miracle, Jews light a menorah during the eight nights of Chanukah. To clearly distinguish which night of Chanukah it is – for example, on the eighth night – all eight candles should be at the same height, and preferably in a straight line.2

The menorah should be lit immediately at nightfall,3 or until the members of the household are present.4 The candles must burn for at least 30 minutes,5 during which time no use should be made of its light.6 It is preferable to use olive oil7 – since the miracle of the Maccabees occurred with olive oil. (Glass cups to hold the oil can be placed in the candle holders of any standard menorah.)

In addition to the main eight lights, the menorah has an extra "helper candle" called the Shamash. Since the Shamash does not count as one of the regular eight lights, it should be set apart in some way – either placed higher than the other candles, or off to the side.8

On the first night, one candle is placed at the far right (as you face the menorah).9 Another candle is placed for the Shamash, which is used to light the others. On the second night, two candles are placed in the two far-right positions – and the left one is lit first. Follow this same procedure each night of Chanukah.10

To publicize the miracle, the menorah is ideally lit outside the doorway of your house,11 on the left side when entering.12 If this is not practical, the menorah should be lit in a window facing the public thoroughfare. Someone who lives on an upper floor should light in a window. Otherwise, the menorah may be lit inside the house on a table.13

After lighting the candles, one sits around the menorah and sings Maoz Tzur and other classic Chanukah songs. Listen to the audio tracks.

The Tenth of Tevet is a 'minor fast day,' recalling when the Babylonians first laid siege to Jerusalem, beginning a chain of disasters which ended with the destruction of the first Holy Temple in the 5th century BCE.14 The fast begins at dawn, and ends at nightfall.15

Tu B'Shvat is the New Year for the Trees. It is technically the day when trees stop absorbing water from the ground, and instead draw nourishment from their sap. In Jewish law, this means that fruit which has blossomed prior to the 15th of Shvat could not be used as tithe for fruit which blossomed after that date.16

The custom on Tu B'Shvat is to eat fruits that grow on trees, especially fruits from the seven species for which the Land of Israel is praised: "...a land of wheat and barley and (grape) vines and fig trees and pomegranates, a land of olive trees and (date) honey" (Deut. 8:8).17

On Tu B'Shvat, it is also customary to eat a "new fruit" (a seasonal fruit that you have not yet tasted this season), and to say the She'hecheyanu blessing. Kabbalistic tradition even includes a mystical Tu B'Shvat "seder" service, where the inner dimensions of fruits are expounded, along with blessings, songs and deep discussion.18

The day before Purim is a fast day, commemorating how the Jews fasted and prayed in preparation for their defense against Haman's decree of annihilation.19 This also commemorates how Esther, having agreed to visit the king uninvited, asked the Jewish people to fast for three days beforehand.20

At the Mincha service, it is customary to give three (half-shekel) coins to charity, in remembrance of the mandatory half-shekels given to the Holy Temple.21

The fast begins at dawn, and ends at nightfall.22

Purim commemorates the dramatic turn-around of events in Persia 2,300 years ago, when tremendous Divine providence – channeled through Esther and Mordechai – saved the Jewish people from Haman's decree of annihilation.

There are four mitzvot on Purim: 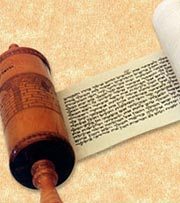 The Megillah (Book of Esther) is read on Purim night and again the next day.27 Every word must be clearly heard.28 We read it in the synagogue,29 because the larger the crowd, the greater publicity is given to the miracle of our being saved.30

The name Megillat Esther actually means "revealing the hidden." Unlike every other book in the Bible, Megillat Esther never mentions God's name even once.31 The hidden hand of God was revealed as a seemingly unrelated series of events spun together. And in the end, Haman and his evil sons were hanged, and Mordechai became prime minister in his stead.

On Purim morning, we reach out to with gifts of food to friends (Mishloach Manot) and gifts of money to the poor (Matanot La'evyonim).32

Then comes the day's grand finale – the festive meal. We eat our fill of "hamantashen" cookies, and dress up in costumes, to let our defenses down and open up to deeper realities. We also imbibe alcohol (responsibly, of course) until one doesn't know the difference between "cursed is Haman" and "blessed is Mordechai."33 We strive to see how life's problems and imperfections are really a unified expression of God's infinite perfection. By using food and drink to gain greater spiritual awareness, "Purim is holier than even Yom Kippur."

In certain walled cities like Jerusalem, "Shushan Purim" is celebrated on the following day, the 15th of Adar. This is because in the days of Esther and Mordechai, the Jews prevailed over their enemies on the 13th of Adar, and on the 14th they celebrated the victory. But in Shushan the capital, the battle lasted another day and Purim was not celebrated until the 15th of Adar.34

In the springtime, the Sages instituted four special Maftir and Haftorah portions, to be read in the synagogue on four different Shabbat mornings:35

1. Parshat Shekalim – Exodus 30:11-16 is read in commemoration of the Half-Shekel announcement which every Jew brought before or on the first of Nissan, to pay for the public offerings in the Holy Temple. This portion is read on the Shabbat preceding Rosh Chodesh Adar (or Adar II in a leap year). If Rosh Chodesh falls on Shabbat itself, then that Shabbat is Parshat Shekalim.36

2. Parshat Zachor – The Shabbat immediately preceding Purim is called Shabbat Zachor. The portion of Amalek (Deut. 25:17-19) is read, since Haman was a descendant of Agog, King of Amalek. Zachor means to remember, and the Torah commands us to "remember what Amalek did to you on your way out of Egypt" (Deut. 25:17). The Sages explain that the definition of "remembering" is to speak the matter aloud at least once a year. Thus most halachic authorities consider it a Torah-level mitzvah to hear this portion once each year.37

3. Parshat Parah – Numbers 19:1-22 is read on the Shabbat following Purim. These verses deal with the Red Heifer used in the spiritual purification process at the time of the Holy Temple. This issue is important at this season of the year, since in looking forward to Passover, every Jew is careful to maintain spiritual purity in order to partake in the holiday offerings. Many authorities hold that this reading is a Torah precept.38

4. Parshat HaChodesh – Finally, on the Shabbat preceding Rosh Chodesh Nissan, we read the special Maftir from Exodus 12:1-20. These verses contain the commandment to make Nissan the head of all months. This was the first mitzvah given to the Jewish people while still in Egypt. By declaring the new month, the Jewish people have the ability and responsibility to sanctify life and the passage of time.39

Rosh Chodesh: Laws and Customs
Why Are The Prayers Of Yom Kipur So Repetetive?
Ha'azinu 5783: A Time for Unity!
Twisted Thinking
Comments