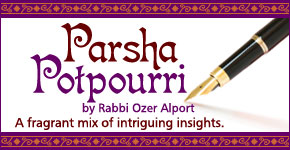 "When you come to the Land of Canaan which I am giving to you for an inheritance, and I will put a plague of tzara'as in the houses of the land of your inheritance." (Lev. 14:34)

"It informs that plagues come upon them because the Emorites hid gold in the walls of their houses all the 40 years that the Jews were in the desert, and through the plague they break the houses and find them." (Rashi)

Parshas Tazria introduced us to the laws governing the different types of tzara'as which can afflict a person's body. Parshas Metzora begins by teaching the elaborate procedure which a stricken person must go through to purify himself. Afterward, we are introduced to a new type of tzara'as, one which afflicts a person's home.

Curiously, Rashi comments that in warning the people about the possibility of tzara'as striking their homes, God was actually conveying good news. Because the previous Canaanite inhabitants hid their treasures in the walls of their houses, the process of scraping a house with tzara'as would actually reveal to them valuable items. This concept seems difficult to understand. Although discovering the hidden treasures would certainly lessen their pain, why did God choose to give them reward in this peculiar manner?

Rabbi Mordechai Kamenetzky offers an inspiring answer to our question based on the following story. After the conclusion of World War II, Rabbi Eliezer Silver was active in visiting DP camps to give physical and emotional support to the survivors of the Holocaust. One day Rabbi Silver was organizing a minyan for Mincha, but one man refused to join.

The man explained that when he was in a concentration camp, there was a religious Jew who managed to smuggle in a siddur. He "rented out" his siddur in exchange for a person's food rations. When this man saw how a religious Jew could take advantage of his siddur at such a time, he resolved that he would never pray again. Rabbi Silver gently suggested that instead of focusing on the actions of the man with the siddur, perhaps it would be more appropriate to recognize how many Jews were willing to give up their precious food rations in order to be able to pour out their hearts to God in prayer.

Rabbi Kamenetzky notes that one of the primary causes of tzara'as is lashon hara (negative speech), which comes from focusing on the shortcomings of others. To the gossiper whose house is afflicted with tzara'as, the Torah hints to the importance of digging beneath the surface and not focusing on superficial deficiencies. Although the house may appear at first glance to be stricken with tzara'as, a deeper look will uncover the presence of valuable gems waiting to be discovered just beneath the surface. Upon contemplating this, he will come to understand that his fellow Jews are just the same. If he only takes the time to adjust his perspective, he will be able to dig deeper and discover the beauty which lies beneath the surface.

Rashi writes (Exodus 1:1) that the Jewish people are compared to stars. The Baal Shem Tov explains that to a person looking up into the night sky, each star appears very small. However, if a person could approach a star, he would find that the closer he gets to it, the larger it appears. Similarly, when viewed from a distance, it is easy to dismiss another Jew as invaluable and worthless. At times when we are tempted to do so, we should remember the lesson of Parshas Metzora and the stars: if we allow ourselves to get a little closer and look under the surface, there are valuable treasures waiting to be discovered.

Although a person's body may be stricken with tzara'as to punish him for his actions, why is a house afflicted with tzara'as and destroyed if it is an inanimate object which lacks free will and which never sinned?

The Beis HaLevi explains that a person's actions influence his physical surroundings. If a person does mitzvot and kind deeds, his environs are uplifted, and if he sins, his surroundings are negatively affected. Conversely, a person is also influenced by his environment. Noach's generation became so wicked that they corrupted the entire world, leaving God with no choice but to obliterate it and begin again anew.

In the case of the house, its owner spoke so much lashon hara (see Rashi - Leviticus 14:34) that it permeated the very walls and foundation of the home, rendering it impure to its core. As if that weren't bad enough, the house has become transformed into a place with the potential to corrupt even pure and innocent people who enter its doors. As a result, just as in the times of Noach, there is no choice but to seal it off and destroy to prevent any further damage from occurring.

The Torah mentions that part of the process of purifying the metzora involves cedar wood, crimson thread, and hyssop (Leviticus 14:4). Rashi explains that because one of the causes of tzara'as is a haughty spirit, the Torah is hinting that the cure for a person who has made himself arrogant like the mighty cedar is to lower himself and become humble like the small hyssop bush. As the hyssop bush is taller than the animal from which the wool thread is dyed crimson (Niddah 26a), wouldn't it have been more appropriate to list them in order from tallest to shortest, which is indeed the order in which they are listed in reference to their use in preparing the ashes of the red heifer (Bamidbar 19:6)?

Citing Maimonides (Deyos chapters 1-2), Rabbi Chaim Kanievsky (Taima D'Kra) explains that with respect to each character trait, a person should ideally strive to avoid either extreme and should conduct himself according to the middle path. However, if a person finds that in regard to a certain attribute he is drawn toward one extreme, it isn't sufficient to merely veer back to the middle, as his natural inclination will slowly draw him back toward the extreme. In such a case, a person must first go all the way to the opposite extreme for a period of time in order to completely eradicate his innate predilection toward the other extreme. Only at that point can he safely return to the middle ground, to which he will then be able to adhere on a lasting basis.

In light of this, Rav Chaim suggests that it is insufficient for the arrogant person to lower himself to the level of the hyssop bush, as he would be unable to sustain this approach. Rather, he must first lower himself all the way to the other extreme, as symbolized by the wool thread, after which he can safely return to the middle path represented by the hyssop. He adds that although Maimonides writes that humility is a trait in which one should in fact aim for the extreme and not the middle path, the Lechem Mishneh explains that this doesn't literally mean that one should go all the way to the extreme, just that he should be closer to the extreme of humility than to the extreme of arrogance.

Standing Up to Antisemitism: 5 Courageous People
Liz Kennedy’s Mission to Help Women become Magnetic
The Non-Jewish Nanny Educating the World about Judaism
Pizza Latkes
Jewish Valor at Pearl Harbor
The History of the Jews of Turkey