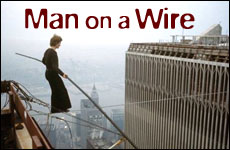 Can you imagine taking this step?

On August 7th, 1974, Frenchman Philippe Petit made history with one of the most extreme high wire performances of all time. I had heard about this a long while back (his story was made into an Academy Award winning documentary film called “Man on a Wire”) but it wasn’t until last week’s 9/11 media attention that I really discovered him and what he achieved. It took him and a small team of friends six years to plan and execute the stunt. Not only would he need to summon the courage to get out on the wire, but they would need to hide out in the (still under construction) upper floors of the World Trade Center, evade guards for hours and shoot arrows between the towers to secure the cable which took seven hours. By the time the cable was ready they had already been up all night and were exhausted.

By the time he got to the middle of the wire he was elated (you can see it in these extraordinary pictures in the video below). He jumped up and down on it, walked forward and backwards and even laid down on his back with one leg dangling over. This went on for 45 minutes! Until the police threatened to pluck him off with a helicopter.

“Death was so close,” he said. Half an inch misstep or a quarter second lapse in concentration would end his life, pure and simple.

Although I believe there are probably better ways to dedicate such extreme talent and energy, how can anyone not be astounded at his courage and total dedication to his vision? It got me thinking and here are the lessons I'm able to derive from it:

After the clarity of vision that comes with the High Holidays, now is the time to focus on putting our dreams into action, and taste the joy of walking on the high wire of life.

Live in the Light

Brace for Impact
Chukat 5782: Let’s Play the Blame Game!
The Sin of Moses: The Two Ways to Communicate
In Aftermath of Chicago’s July 4th Shooting, Local Moms Provide Countless Points of Light
Comments
MOST POPULAR IN Spirituality
Our privacy policy