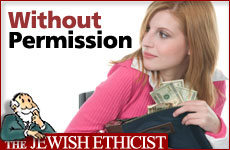 Can two wrongs make it right?

Q. A certain store overcharged me a substantial amount. I don't have enough documentation to prove it. Can I right the wrong by finding a way to take merchandise with the value of their debt?

A. The first route in redressing wrongs should always be to turn directly to the responsible party and make a clear and convincing presentation of your case. Any kind of action, legal or otherwise, should be resorted to only after a good-faith effort to resolve things amicably. Very often people are totally convinced they are right, but once they have a chance to hear the other side they begin to see that their case is not as strong as they had supposed.

So your first step should be to turn to the store and explain your situation. Proving your case is not necessarily the same as being convincing; most merchants will be fair if a customer presents a convincing case even if the case would not necessarily stand up in court.

If this step is unsuccessful, you want to know if you can take the law into your own hands. In secular law, such a step is sometimes known as "self-help"; Jewish law also recognizes the legitimacy of self-help in certain instances, but its application is severely limited.

The Talmudic passage on which the Jewish doctrine of self-help is based reads as follows:

However, this permission is subsequently whittled down significantly by the continuation of the passage and by later authorities.

1. Not sneaky: Later in the same passage, we learn that "self-help" should only be resorted to in a public and demonstrative way:

Ben Bag Bag says, Don't enter your neighbor's courtyard to take [even] your own property without permission, lest you appear to him as a thief. (1)

This consideration certainly applies in your instance; taking an object without paying would definitely make you appear as an ordinary shoplifter. Even if you could be sure not to be detected, the store would believe they were stolen from and every instance of theft lowers the amount of trust and honesty in society as a whole.

2. No other resort: Self-help can be employed only when there is no other way of obtaining justice (besides court).

3. A demonstrable court case. Doing justice for yourself is meant to be a "short-cut" for doing justice through the courts. It follows that it is not permitted in a case where a court could not objectively verify the victim's claim. Otherwise this permission would undermine law and order; any person could resort to trickery and assert that it was in order to right some ancient wrong. This condition is not fulfilled in your case, since you acknowledge that you don't have proof of the wrong that would stand up in court.

4. A specific object. The case of self-help is where the victim recovers a specific object that actually belongs to him. If the store stole your chair and put it in the showroom, "self-help" could be justified if the other conditions are fulfilled. But in the case of a monetary debt, it is not permissible to resort to force or fraud in order to recover a debt. Since at this stage the store merely owes you money, self-help is not a relevant avenue.

Jewish law recognizes that there are some instances where a person can just go ahead and right a wrong without resort to courts. If someone steals your car and parks it in their driveway, you can just go into their driveway and drive it back home. But the application of this doctrine is very limited. We don't allow it to become an excuse for breaking law and order whenever anyone is personally convinced that he has been wronged. In your case, the best course of action is to go straight to the store and make the best case you can, at the same time being prepared to listen to any counterclaims the store might want to present to you.

The Jewish Ethicist: Was this Stolen?

The Jewish Ethicist: Is the Seller Taking Advantage of Me?

Managing the Stars
It Takes A Lot Of Faith To Be An Atheist
How Instagram Brought Back This Nostalgic Soup
What Makes Eli Run?
Comments
MOST POPULAR IN Current Issues
Our privacy policy