An Open Letter to Chelsea 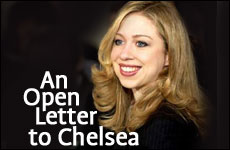 Like you, I belonged to the Methodist Church and married a Jew.

I know I’m writing at the worst possible time. As you and Marc begin married life, you hardly need another Jew offering intrusive suggestions about how to navigate your interfaith marriage. You didn't ask for the incessant media coverage and a parade of rabbis, ministers and interfaith outreach advocates opining about what they believe your marriage means to the American Jewish community. You just fell in love with a nice guy who happens to be Jewish.

I hesitate adding my voice to the already-deafening cacophony of Jewish opinion. I do so only because 20 years ago, I stood in your shoes.

Like you, I incorporated both traditions into my wedding, attempting to seamlessly blend them to the higher calling of love.

I was not born Jewish. I grew up in a devout Christian household, going to church every Sunday. Like you, I fell in love with a man who happened to be Jewish. Like you, when I met my husband, I attended a Methodist Church. Actually, I did more than that. I was the Minister of Music at what was then one of the largest Methodist churches in Texas, where every Sunday morning I led multiple choirs at three services attended by thousands. When I met my husband, most of my waking moments were spent in the Methodist church.

Like you and Marc, my husband and I incorporated both traditions into our wedding, attempting to seamlessly blend and bend them to the higher calling of love. Like you and Marc, we wanted a Methodist minister and a rabbi to co-officiate. Unable to find a rabbi, the senior pastor of my Methodist church spoke, basing his message largely on remarks written by a rabbi who was sympathetic short of participation.

When we got married, Methodist Minister of Music as I was, I would no more have considered converting than moving to the moon. Yet, these many years later, I write these words from my home near Jerusalem, my every waking moment immersed in Judaism.

What happened, and what does this have to do with you?

The story is complex and too long to recount here. Our journey from the margins of Jewish life to its center could fill a book, which in fact, my husband and I are currently completing.

The short version is that, quite simply, I explored Judaism on its own terms, and found in it something beautiful. Christianity has brought religious connection to billions on this planet. But in becoming a Jew, I have embraced a very special relationship with God and with the world that only a tiny percentage of people get to experience. I have embraced something precious. More than that, in discovering Judaism, I have discovered my truest self.

Chelsea, over the coming months and years, you will hear from an abundance of diverse Jewish voices. For the Jewish interfaith outreach activists, you are their new poster child. Some will insist that you can fully integrate into the Jewish community short of becoming Jewish, and it’s really inconsequential whether or not you convert. Others will assure you that Judaism and Christianity can easily co-exist in your home, and your children can always choose a religious identity when they grow up.

For the in-marriage advocates, you are a poster child of a different sort. Your marriage is a symbol of what is wrong with the Jewish community, a problem that they hope can be solved. Some of them will dismiss you. Others will want you to become involved in Jewish life, not because of any intrinsic connection to you, but because they can worry less about Jewish continuity if your children should grow up to be Jews.

From my experience moving from Methodist Christian to observant Jew, none of these voices will serve you well. Whatever anyone says, raising children in both religions is a fool’s errand, and is almost always done for the parents’ convenience rather than the child’s best interests. And whatever anyone says, there is a vast difference between participating, even enthusiastically, in Jewish activities as a Christian, and actually becoming Jewish. Otherwise, conversion would be meaningless.

There is a vast difference between participating in Jewish activities as a Christian, and actually becoming Jewish.

None of these voices have your true interests at heart. They are not asking how Chelsea Clinton and Marc Mezvinsky can lead a meaningful religious life together. Whether or not they admit it, what they are really asking is how Chelsea and Marc can become a vehicle for their Jewish survival concerns. Their answers are different on each side of the divide, but the question is the same: What can we do to ensure Jewish continuity? However, their worries are neither your creation nor your responsibility.

What you will rarely hear, Chelsea, and what I am suggesting based on my experience, is to take a close look at traditional Judaism. Not because Jews are concerned about Jewish survival. Not because some people want it for your children. Not because it might make your husband or your in-laws, or anyone else happy.

Rather, you should take a look for the simple reason that it is an amazing tradition which enriches one’s life in ways too numerous to count. Having been on both sides of the religious divide, I can say that, in Judaism, you, together with Marc, may find a treasure.

In a recent article in The Forward, Ed Case expressed the hope that young people would look at your wedding and say, “If this is good enough for Chelsea Clinton, then it’s good enough for me.” But you don’t seem like the type that settles for “good enough.” And I can attest that Judaism is the antithesis of “good enough.”

Don't get me wrong; I am not pushing you to convert. Conversion is a monumental life decision that can only come from you; it cannot be forced. I am only suggesting that in having married a Jewish man, you now have a tremendous opportunity to discover something that may move your very soul.

Chelsea, I wish you only the best. And if you and Marc ever visit the Holy Land, we would be honored to have you as our guests for Shabbat.

Gayle Berman is a singer, pianist, and voice teacher. She lives with her husband and two children in Efrat, where she and her husband are currently writing a book about their spiritual journey for intermarried couples.

Faith in the Depths of Hell
It Takes A Lot Of Faith To Be An Atheist
How Instagram Brought Back This Nostalgic Soup
What Makes Eli Run?
Comments
MOST POPULAR IN Israel
Our privacy policy