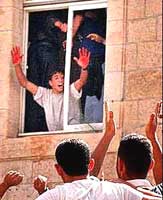 In 2000, at the start of the Palestinian intifada, two Israeli reserve soldiers were brutally lynched at a Palestinian police station in Ramallah. The two had taken a wrong turn and ended up in the West Bank town where they were set upon by a crowd. Palestinian police officers stood by -- and some participated -- as the crowd beat, mutilated, burned and disemboweled the Israelis. The image of one young man, waving to the crowd with bloodied hands, came to symbolize the vicious wave of terror that would claim over 1,000 Israeli lives.

Tishrei 11
Can You Show Me This "God?"
How to Become Immortal
Judaism and Mental Health
Comments
MOST POPULAR IN Day in Jewish History
Our privacy policy
Aish.com Is Looking for Great Writers