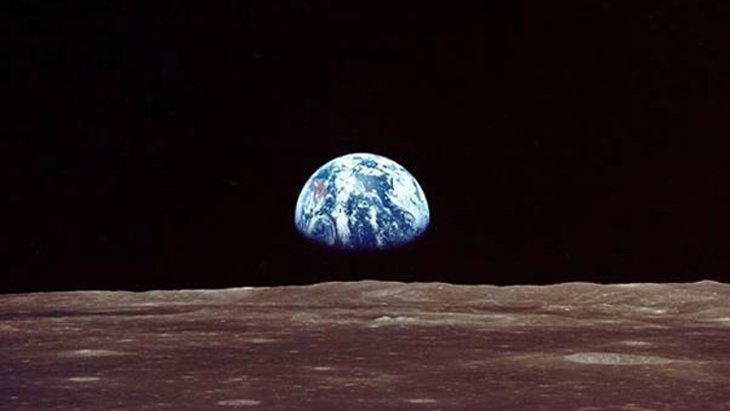 The moon is central in Jewish tradition.

Fifty years ago, on July 20, 1969, the Apollo 11 Mission landed on the moon. Neil Armstrong became the first human to walk on the moon, declaring the immortal words, “That’s one small step for man, one giant leap for mankind.” For a moment, the entire world was united in awe as they contemplated the wonder of humans on the moon. “For one priceless moment in the whole history of man, all the people on this Earth are truly one,” Pres. Richard Nixon told the astronauts while they were still on the moon.

The moon plays an important role in Judaism. It’s both metaphor and measure of our days. As the world marks half a century since we first ventured to its surface, here are seven Jewish facts about the moon.

The Jewish calendar differs from the secular Gregorian calendar that many of use today. It relies heavily on the moon’s cycle to regulate the Jewish months. As the Talmud says, “The other nations count by the sun, while Israel counts by the moon” (Sukkah 29a). The Hebrew calendar has 12 months, timed to coincide with each lunar month (the time it takes the moon to orbit the earth and return to the same spot in the sky as viewed from earth). The lunar month is roughly 29.5 days, so Hebrew months are either 29 or 30 days long.

Since the lunar year is shorter than the solar year, if it followed the moon exclusively, the Jewish calendar would drift through the seasons (like the Muslim calendar does), falling earlier and earlier each year. A purely lunar calendar is 354 days long. Without adding leap days, the Jewish holidays would occur at different seasons in different years.

In order to regulate this, which is essential since the Torah commands us to keep Passover in the spring, the Jewish calendar uses leap months. In every 19-year cycle, seven leap months are added.

As the moon orbits the earth, it appears to grow larger (“waxing”) then smaller (“waning”) each day in the night sky. At the end of this 29.5-day cycle, the moon reemerges as a narrow crescent. This is called the “New Moon” and it indicates that a new Jewish month has begun. In the Talmud, Rabbi Yochanan compared a person who blesses the New Moon in its appointed time to one who greeted God himself (Sanhedrin 42a).

Since the year 358 CE, Jews around the world have calculated the exact date of each New Moon (and therefore the first day of each new Jewish month) from a set calendar. Before then, the New Moon was proclaimed by a special Jewish court in Jerusalem called the Sanhedrin.

Using a long torch on top of the Mount of Olives in Jerusalem, a representative of the Sanhedrin would light a fire on top of the hill. People watching on nearby hills would see the flames and light their own fires. In this way, notice that the New Moon had been sighted spread far and wide. (This practice also explains why most Jewish holidays are celebrated for an extra day outside of the land of Israel; since it could take days for the news of the New Moon to spread, far-flung Jewish communities adopted the custom of celebrating for two days.) In later days, the Samaritans would sometimes try and confuse Jews by lighting their own fires, so the Sanhedrin began to send out news that a new month had dawned using messengers instead.

The first day of each Jewish month is a mini holiday. The commandment to celebrate Rosh Chodesh (literally the “Head of the Month”) was the very first commandment that God gave to the entire Jewish people as a whole. It dates back to the days when our ancestors were slaves in ancient Egypt: “God said to Moses and Aaron in the land of Egypt, saying ‘This month shall be for you the beginning of the months. It shall be for you the first of the months of the year’” (Exodus 12:1-2).

In ancient times, Jews celebrated Rosh Chodesh by offering special gifts in the Temple in Jerusalem. Today, we mark the day with beautiful prayers, singing Psalms in synagogue and inserting special blessings into our prayers.

There’s a deeper meaning to the offerings we make on Rosh Chodesh, and it’s directly connected with the unique qualities of the moon. Waxing and waning, the moon reminds us that strength is rarely static: there are times when nations and people are strong and times when they are weaker. These changes remind us that even when we seem down and hopeless, change is around the corner. Celebrating the New Moon reminded us that our work on behalf of those who are weaker than us is never done.

Sanctification of the Moon

Each month, Jews around the world recite a beautiful prayer early in the cycle of the new moon, as it waxes in the sky. Usually said following the first Shabbat after Rosh Chodesh, the Kiddush Levanah, or Sanctification of the Moon prayer is one of the most beautiful in Jewish liturgy. The prayer compares the Jewish people to the new moon, which is renewed anew each month.

It’s very poetic. In one part, we rise up on our toes while gazing at the moon and recite “Just as I dance toward you but cannot touch you, so may none of my enemies be able to touch me for evil.” Under the light of the moon, we turn to one another and wish each other “Shalom aleichem” – peace be with you. It’s a powerful moment that reminds us of the moon’s beauty and helps us appreciate afresh the world that God created.

Outlawing Celebrations of the New Moon

In the days of the wicked King Antiochus, who ruled over the land of Israel as vassal of the ancient Greek empire, three key Jewish practices were banned: circumcision, Shabbat and Rosh Chodesh. The evil king realized that the entire Jewish calendar is dependent on watching for the New Moon and keeping track of Jewish days and holidays. He forbade Jews to watch for the New Moon; his goal was to undermine the entire Jewish calendar and thus weaken the Jewish people.

A brave band of Jewish fighters refused to give up. Led by the Maccabees, the Jews fought the Greeks and prevailed, maintaining our timeless Jewish practice of keeping track of the moon’s phases and, with that, our Jewish calendar. We celebrate this triumph each year during the holiday of Hanukkah.

In Jewish mystical tradition, Jewish women are seen as having a special connection with the moon. During the sin of the golden calf, when some Jews lost faith in God following the exodus from Egypt and constructed a golden idol to worship, Jewish women resisted worshiping the idol and maintained their faith in God. As a reward, women were given an extra holiday each month: Rosh Chodesh, when many Jewish women refrain from some types of work.

Traditionally through the years, it’s been common for Jewish women not to cook or sew on Rosh Chodesh. Today, some women gather together on Rosh Chodesh to learn Torah or recite prayers together, honoring their connection with this special day.

The moon is a central symbol in Jewish thought and many of the qualities that most ennoble the Jewish people are reflected in the moon.

Take the moon’s luminous glow in the night sky. The moon has no source of light of its own; instead, its beautiful glow is a reflection of the sun’s brilliance. So too with the Jewish people: like the moon, we reflect an important source of light - God and His Torah. Reflecting this dazzling light is an honor: like the moon, we receive beauty and then send it back into the world through our actions and our very being.

And the moon’s waxing and waning reminds us that like the moon, even when it seems diminished and nearly invisible, we are confident that it will re-emerge, growing brilliant and full once more. So too with the Jewish people: even in our darkest times, we have relied on God’s promise that the Jews will never disappear and that one day we will be restored to our dazzling fullness.

Rosh Chodesh: The Meaning of the New Month

Deep Connection between Art and Judaism: Seasons of the Moon – Tevet

Mystical Roots of Tu B'Av
Why Are The Prayers Of Yom Kipur So Repetetive?
Ha'azinu 5783: A Time for Unity!
Twisted Thinking
Comments
MOST POPULAR IN Holidays
Our privacy policy
Aish.com Is Looking for Great Writers